The phylogenetic tree below shows relationships among seven different vertebrate taxa and one non-vertebrate. Here are a few points to note before we deepen our analysis.

Note that you can scroll the text below the phylogenetic tree so that you can look at the tree as you read the text.

How do we know that the vertebrates are a clade? In this case, the evidence is from anatomy (body structure). All vertebrates have a boney jaw. In this tree, the jaw is indicated by the red dot that’s to the left of letter “B.” 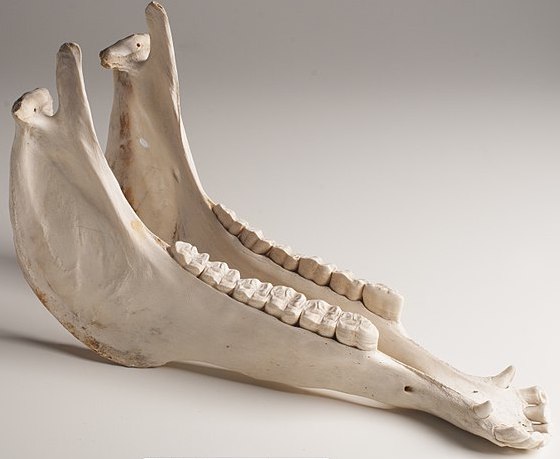 A characteristic that’s used to classify the members of a clade is called a shared derived feature. The word “derived” means “marked by a character…. not present in the ancestral form” (Merriam Webster). In the case of vertebrates, the clade consists of all the species that have a jaw. Species outside this clade — such as the hagfish — lack a jaw.

Features that the members of a clade share, but which are also shared by larger, more inclusive clades are called ancestral features. For example, we just mentioned that the clade that includes “G” and its descendants (rats and gorillas) is the mammal clade. An ancestral feature of the mammal clade would be “claws or nails.” Every mammal has this trait, but it’s not useful in defining the mammal clade, because it’s found in other organisms outside the clade (such as birds and alligators).

MISCONCEPTION ALERT: In a horizontally organized phylogenetic tree, like the one above, the vertical arrangement of the taxa says nothing about how closely related these taxa are. For example, a frog is no more closely related to a lizard than it is to a gorilla. That’s because the lineages in a phylogenetic tree can rotate around the nodes. A useful mental trick is to think of them as a mobile sculpture, with the root attached to the ceiling.

In other words, these two phylogenetic trees are equivalent.

Note that this is true regardless of the orientation. If the tree were oriented vertically, then the horizontal arrangement would be the one to ignore.

[a]Keratinous scales (at “E”) are a shared derived feature of the clade that includes lizards, alligators, and robins.

[a]Claws or nails (at “D”) are an ancestral feature of the clade that includes lizards, alligators, and robins.

[q]In the phylogenetic tree below, the species that is most closely related to the polar bear is the ___________. Justify your answer.

[a]The species that is most closely related to the polar bear is the brown bear. That’s because the two share the most recent common ancestor.

[q]Why is it incorrect to say that the Giant Panda is most closely related to the Spectacled Bear?

[a]On a phylogenetic tree, closeness is about how recently two taxa share a common ancestor, not who’s next to whom. The giant panda’s most recent common ancestor with the spectacled bear is “A.” That means that the Giant Panda is equally distantly related to every other bear on the tree.

To understand how phylogenetic trees work, it helps to build one.

The table above is called a character table. In this context, a character is any quantifiable, inherited trait. A “1” means that the trait is present. “0” means that it’s absent.

When species share many characters, then they’re considered to be closely related. If they share very few characters, then they’re more distantly related. Take a look at the shark. Note that it shares the character of having a vertebral column with all of the other animals in the chart, but nothing else. That’s evidence that the shark can be classified as a more distant relation. Remember that, and use it in the exercise below.

Think of this as a puzzle. Don’t worry about getting the right answer right away. Use trial and error. The feedback will guide you to the solution.

One character listed in the table above might not be familiar to you. An amniotic egg is a complex egg found in birds, reptiles, and mammals (as opposed to the much simpler eggs found in fish and amphibians).

[q labels = “top”]Based on the table, organize these animals into a phylogenetic tree. Place shared derived traits above the red lines. Place the animals on the top.

[q multiple_choice=”true”]Based on the phylogenetic tree below, which of the following statements is true?

[q multiple_choice=”true”]Which of the following is true about the most recent common ancestor of rabbits, monkeys, alligators, and chickens? 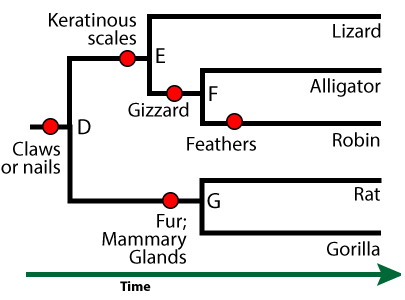 In the phylogenetic trees that we’ve been discussing, the shared derived features for organizing the tree into clades have been based on morphology (the study of body structure). A slightly more specific term that’s almost identical to morphology is anatomy (the study of the structure of organisms). Note that different sources will use either term (or both)

In terms of phylogeny and classification, the important point is that using morphological or anatomical characteristics, you can look at a group of organisms and ask yourself questions like “Do they have fur? Do they have feathers?” Your answers would enable you to construct a phylogenetic tree.

Note that for one category of organisms, anatomical or morphological data is all we have. These are extinct organisms. Do the triceratops fossils below represent members of one clade? Are they members of the same species?

Should Archaeopteryx be classified as a bird or a dinosaur?

The answer is “both.” Birds are dinosaurs. If you’re interested in how that claim is supported by evidence, you can read about it in this article on BirdLife International’s website (the link opens in a new tab).

For living species, since about the 1940s, phylogenetic analysis has been based on molecular evidence. This evidence has focused on two types of molecules that make up living things: proteins and nucleic acids (DNA and RNA).

4b. Evidence from Proteins

In terms of phylogeny, the key thing to remember about proteins is that they’re composed of building blocks called amino acids. In the diagram at left, these amino acids are represented by three-letter abbreviations such as Asn, Gly, Phe, etc. During the process of protein synthesis, these amino acids are chained together in a genetically determined sequence.  Note that if you want to review the structure of proteins in more detail you can do so at this tutorial (which will open in a new tab).

A protein called cytochrome c has been widely used to determine evolutionary relationships. Why? Because cytochrome c is a key enzyme used by mitochondria during cellular respiration. As a result, every organism with mitochondria — that means millions of eukaryotic species — has this molecule. The fact that these species share mitochondria and cytochrome c is itself a shared derived feature, and it’s evidence that all eukaryotes make up a clade.

Look at amino acid position 64. Every species on the table has the same amino acid at that position. It’s “L,” which represents leucine. At position 65, every organism except for the shark has the amino acid “M.”

By doing this type of analysis, you can count the amino acid differences within the cytochrome c protein among the members of any species. The result of one such analysis is shown below. Here’s how to read it. Find where the chicken and the moth intersect. The number 29 means that between chickens and moths, there are 29 amino acid differences in the cytochrome c sequence. Between chickens and penguins, there are three differences.

Complete the interactive reading below to see how the information in this table can be used to construct a phylogenetic tree.

[q]Study the table below. It shows the number of amino acid differences in cytochrome c in 5 different species. Just a glance tells you that the chicken’s cytochrome c is most similar to that of the [hangman], and most different from that of [hangman].

[q labels = “top”]Based on the cytochrome c differences in the table below, drag the organisms listed above into the correct position. Note the position of the chicken. Use trial and error if you need to.

[q multiple_choice=”true”]In the phylogenetic tree below, what’s the best justification for the claim that yeast are the most distant relative of the chicken?

The gold standard for analyzing phylogeny is DNA. DNA is composed of subunits called nucleotides. To trace phylogeny, biologists find common DNA sequences and then identify mutations that have arisen in related lineages. Mutations within shared DNA sequences can be seen as shared derived features.

in the example above, the common ancestor, population A, and population B all form a clade with two branches.

The basic ideas behind phylogenetic analysis based on DNA are the same as we saw above for proteins.

The image below shows how DNA sequences were used to create a phylogenetic tree for 8 species.

Here’s some of the thinking involved in constructing the phylogenetic tree from this DNA evidence.

The DNA of any species consists of millions or billions of nucleotides, so phylogenetic analysis of DNA usually involves huge amounts of data. The size of the data set is what makes DNA such valuable evidence for determining phylogeny. At the same time, that much data requires that most DNA-based phylogeny is done by computers.

Using such analysis is enabling scientists to redraw the tree of life. For example, DNA analysis has established that the land-living mammal that’s the closest relative of whales is the hippopotamus.

5. Is it a Cladogram or a Phylogenetic Tree?

Note that a distinction can be made between a cladogram and a phylogenetic tree.

Strictly speaking, a cladogram shows the branching pattern of evolution only, with no reference to time. A phylogenetic tree, by contrast, is usually scaled, with branch lengths being proportional to the amount of time between the events indicated on the tree.

[a]These are shared derived features based on anatomy (or body structure). Morphology would also have been a fine answer.

[q]Phylogenetic analysis based on proteins uses sequences of ___________  as shared derived features.

[q]COMPLETE THIS SENTENCE: In a given stretch of DNA or within a protein, the more nucleotides or amino acids that two species share…

[a]In a given stretch of DNA or within a protein, the more nucleotides or amino acids that two species share, the more closely they’re related.

[a]The shared “T” can be used as a shared derived feature for classification.

[a]Because the diagram below has no timescale, it should be referred to as a cladogram.

[a]Because the lineages are proportional to time, the diagram qualifies as a phylogenetic tree.

[a]Strictly speaking, the diagram below should be called a cladogram (because there’s no reference to time). But it’s probably fine if you called it a phylogenetic tree.