1. Introduction: What is a DNA Fingerprint?

Four DNA fingerprint patterns are shown above. One was made from from DNA collected at a crime scene, and one for each of the three suspects in the crime.  Which suspect was at the scene of the crime?

For the past 30 years, DNA fingerprinting has been a mainstay of forensics (crime investigation). It’s also a key tool used in every branch of biological research.

An early method for creating a DNA fingerprint was based on restriction fragments. These segments of DNA are created by bacterial enzymes called restriction endonucleases (frequently referred to as restriction enzymes). These enzymes were discussed in the first tutorial in this module (and you should read about them now if you’re doing this tutorial before that one) 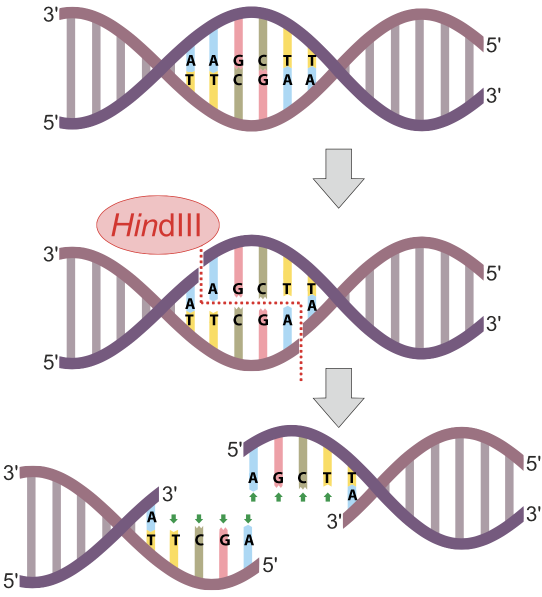 In the diagram at left, the restriction endonuclease HinDIII recognizes the nucleotide sequence AAGCTT, and cuts the DNA between the two As. Note that because that sequence is found on  both strands(running in opposite directions), the cut winds up being a double stranded cut, and completely severs the DNA. 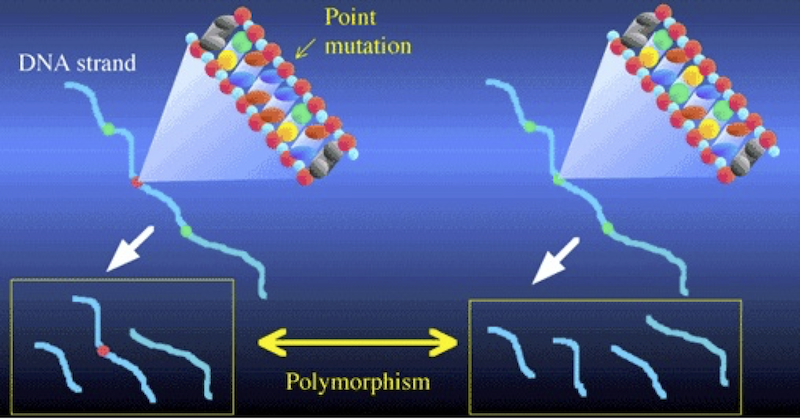 Consider the illustration above. It shows two DNA strands. The sequence on the right has three restriction sites (represented in green). When cut with the corresponding restriction enzyme, that DNA will be cut into four fragments. In the DNA on the left, there’s been a mutation in the second restriction site (shown in red). As a result, the corresponding restriction enzyme won’t recognize that site, and won’t cut the DNA at that point. Consequently, the left sample of DNA is cut into three fragments, while the right sample is cut into four. Note also how in the DNA strand on the left, the combination of the second and third fragments leads one of the fragments to be considerably longer than any of the others.

[q] HindIII is a [hangman] enzyme.

[q] The two yellow boxes below both show pieces of [hangman] that has been cut into restriction [hangman] .

[q] In the diagram below, the restriction fragments are indicated by number

Electrophoresis is “the movement of charged particles in a fluid or gel under the influence of an electric field.” The process involves the type of apparatus shown below. A gel (5), often made of the polysaccharide agarose (a seaweed extract), is placed in an electrophoresis chamber (3). The chamber is essentially a plastic basin which holds a buffer solution that conducts electricity (6). The chamber has positive (4) and negative (2) electrodes, which are attached to a power supply (7).

A solution with restriction fragments (also known as a restriction digest) is placed within wells (1), which are indentations in the gel. When you turn the power on, the DNA in the digest will get pushed through the gel, away from the negative electrode (2) and toward the positive electrode (4).

This pushing is related to DNA’s chemistry. DNA’s backbone consists of alternating deoxyribose sugars (the dark blue pentagon with a “D” below) and phosphate groups (the circle with a “P”).

The image below shows what you would see if you put three different samples of DNA into an electrophoresis chamber. 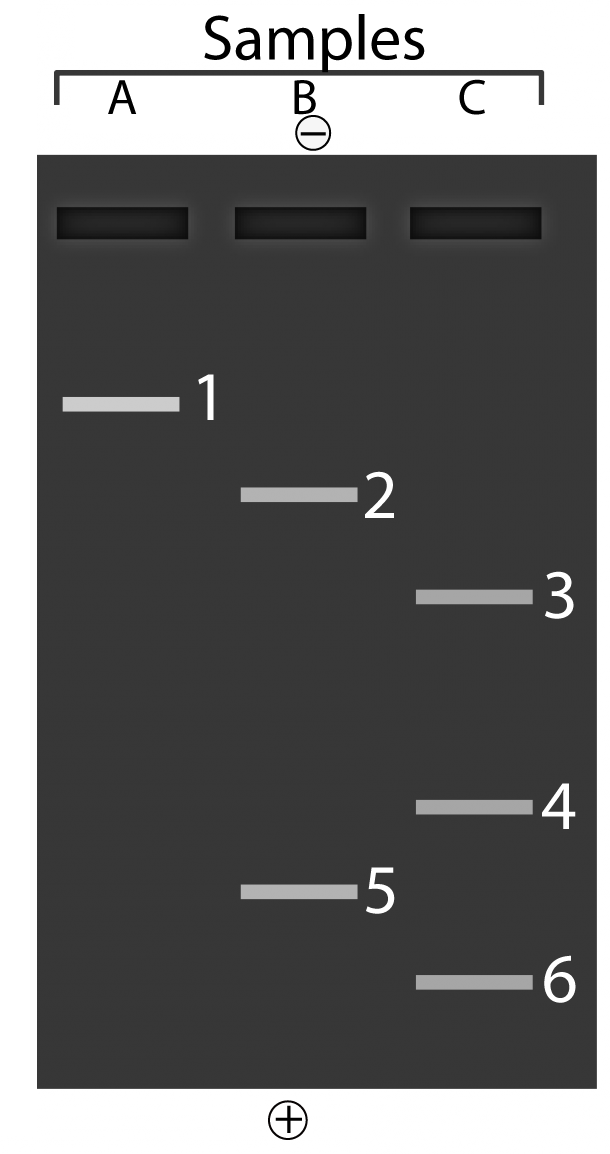 To make sure you’re understanding the explanation above, answer the questions that follow.

[q]Imagine the you’re a technician in a crime lab for a police department. Where are you going to place your samples of DNA?

[q] What’s the smallest fragment in the gel shown below?

[q] What’s the largest fragment in the gel shown below?

[q] In the diagram below, which letter represents restriction enzymes?

[q] In the diagram below, which letter represents restriction fragments?

[q] In the diagram below, which letter represents the “gel” in gel electrophoresis?

[q] In the diagram below, which letter represents the position of the smallest DNA fragments from electrophoresis.

[q] In the diagram below, the DNA fingerprint is represented by

That’s it for DNA fingerprinting at the high school level. The actual DNA fingerprints used in courtrooms around the world today use a far more elaborate method, first developed by Sir Alec Jeffries in 1984. If you want to learn about it, please follow this link to our AP Bio/College level tutorial about DNA Fingerprinting.

Before leaving, however, consider this. While it might seem like the main use of DNA profiling is to convict criminals, it’s also been used to exonerate people who were wrongly convicted of crimes, often after these people had served years behind bars. The Innocence Project has freed more than 350 wrongly convicted people by using DNA. That includes 20 individuals who were on death row. Click the preceding link to learn more about this group’s work.