In our study of the humoral response, we saw how plasma cells can secrete antibodies that help overcome infectious pathogens. But what if your own cells are the problem? That’s what happens when cells become infected by a virus. The virus turns your cells into virus factories (click here to review viral life cycles). In other words, a big part of fighting off a virus is destroying virus-infected cells.

To deal with viral infections, your immune system deploys a cell-mediated response. In this response, squads of cellular assassins called Killer T Cells (also called Cytotoxic T cells) seek out and destroy infected cells displaying viral antigen. This same response can also destroy mutated cells before they become cancerous. Figuring out how to amplify this response is becoming a major focus of cancer research.

After looking at the cell mediated response, we’ll close this series of modules on the immune system by looking at immunological memory: how our immune system remembers previous infections, allowing us, in certain cases, to beat back repeat infections by the same pathogen before we feel the symptoms of disease. We’ve become immune. Let’s see how.

Killer T cells (“6”, at right), like Helper T cells and B cells, have highly differentiated antigen receptors. If you’re lucky, then you’ll possess killer T cells that have receptors (“5”) with antigen binding sites that are complementary to antigen on whatever viral pathogen has infected you. If that’s the case, then the killer T cell, after binding with the antigen that’s being displayed by the infected cell, will use its CD8 protein (“7”) to grab onto the tissue cell’s MHC protein. With its victim locked in this molecular grasp, the Killer T cell will unleash two chemical weapons. Granzymes induce the infected tissue cell to undergo apoptosis, or programmed cell suicide. Perforins are messier weapons. As their name indicates, they perforate the tissue cell’s membrane. This causes cytoplasm to leak out, and water and ions to flow in, creating osmotic pressure that destroys the cell.

When you’re experiencing a viral infection, you need lots of specific killer Ts in order to seek out and destroy the virus-infected cells inside of you. How does your body know how to make Killer Ts with the specific T cell receptors that will bind with the viral antigen? This is essentially the same problem that body solves in making antigen-specific antibodies, and the solution is the same: clonal selection. Through recombination and high mutation rates, your immune system develops a vast library of killer T cells, and these cells wait in lymph nodes to be stimulated into action.

This stimulation involves several steps, which is probably an evolutionary response to the danger connected with attacking cells that are part of one’s own body. As with initiation of the humoral response, the cell mediated response begins with antigen presenting phagocytes (“1”) circulating to lymph nodes, where they hold the antigen that they’ve ingested aloft in their Class II MHC protein (“5”). Many Killer T cells (“3”) will “test” their T cell receptors to see if there’s a complementary fit. If there is a fit, a weak bond forms, and the Killer T will grab on with an accessory protein (shown in red). Simultaneously, a helper T (“2”) with matching T cell receptors will also bind with displayed antigen.

All of us (unless we have a problem with our immune system) have had the experience of developing immunity. Perhaps you’ve received a vaccination, which makes you immune to whatever pathogen you’ve been vaccinated against. Alternatively, you might have become ill with a disease (like chickenpox), and, ever since, you’ve been immune to that disease. How does that work?

The key idea here is immunological memory. What does it mean for your immune system to remember? Well, let’s start by thinking about what it means for your nervous system (your brain) to remember something. Without going into the cellular and molecular details, remembering means that you don’t have to learn something from scratch. If you’ve met someone, and you remember that encounter, then you’ll recognize them the next time you meet them. Immunological memory is, in that sense, the same. When your immune system remembers an encounter with a previous pathogen, it quickly recognizes that pathogen, and can vigorously respond (vanquishing the pathogen before you feel any symptoms of the disease). 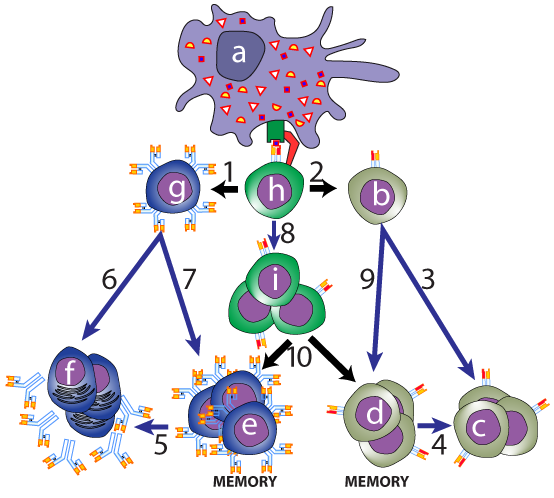 Let’s follow the action in the diagram to your left. Cell “a” is an antigen presenting cell. It brings news about this pathogen to a helper T cell (h) that can recognize this antigen, which sensitizes the immune systems effector cells: cells that can do something about the infection. The arrow to the left of the helper T (“1”) represents cytokines that the helper T would send to a B cell (at “g”) that can also recognize that same antigen. These cytokines induce that B cell to clone itself and differentiate (arrow “6”) into a clone of plasma cells (“f”), which produce antibodies that help vanquish the pathogen.

But not all of the stimulated B cells become plasma cells. Some follow a different path (“7”) and differentiate into memory B cells (letter “e”). These memory cells persist after an infection. When the next infection brings the same antigen into the body, that antigen will quickly be recognized by the memory B cells, which will divide and differentiate (arrow “5”) into plasma cells (“f”) that will produce antibodies against this pathogen.

Here’s a slightly off-color analogy that might help you better grasp how memory cells work. Imagine that you’re the extraordinary Helen Keller. You’re both blind and deaf. You go to a party with 1000 guests, you’re looking for a friend, and no one (including your friend) is helping you. The only way to find your friend is to shake hands with everyone you meet. You’ll find them, but it will take some time. This is how an initial immune response works. The right effector cells (the Helper Ts, Bs, and Killer Ts with receptors that complement the antigen) are already there, but the entire collection of cells needs to be examined, one by one, before the right ones are found. Because the discovery process is random, this might occur quickly, but it’s more likely that it will take some time. Now, imagine that Helen Keller’s friend has been cloned. In this party of 1000 guests, 100 are the cloned friend. Finding that friend is going to occur much more quickly. And that’s how memory cells lead to a quicker and more vigorous immune response when you respond to a pathogen that you’ve previously vanquished. 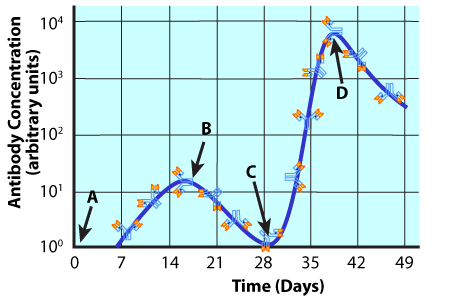 Point “A” is day 0 on the X axis. That’s when you are exposed, for the first time, to this particular pathogen. All of the events that we’ve previously studied in the humoral response lead your body to produce antibodies, which peak at point “B” about day 16. Note that in this graph, antibody concentration is represented by the blue line, and the units are arbitrary. In subsequent days, through mechanisms that we’re not going to study, the immune response is suppressed, and antibody levels fall between points “B” and “C.”

At point “C,” however, you get re-exposed to the same pathogen. Notice that the antibody concentration level shoots upward to a much higher level than it ever did during your first exposure. This is secondary immunity at work. Because of the presence of memory cells, your immune system snaps into action. The response is just as specific, and it’s much stronger, with higher levels of antibody produced in much less time (notice the peak at point “D”).

Hopefully, this will let you avoid a misunderstanding that many people who haven’t learned about the immune system have. If you have immunity, you can still get infected. After all, it’s not as if you have some magic shield that keeps pathogens from entering your body (this is an idea that I play with in my immune system video, during the chorus sequence). Pathogens still enter, and you still get infected. However, because of memory cells, your response is so quick and so vigorous that you beat back these pathogens before you feel the symptoms of disease.

As discussed in the introduction, vaccinations can artificially elicit the development of memory cells. The practice has been around for over 200 years, and it’s called vaccination because it was first practiced though deliberate exposure to cowpox virus (which causes a mild illness) as a means of preventing smallpox (a deadly disease). Vacca means cow in Latin (it’s vaca in Spanish), hence vaccination. Vaccination is also referred to as immunization, since what it does is induce the immune system to develop memory cells for disease-causing pathogens.

The way in which deliberate exposure to cowpox leads to immunity to smallpox is a model for understanding how all immunizations work. To induce immunity, scientists find either weakened, inactivated or fragmentary versions of the pathogen (for example, viral proteins, as opposed to the entire virus). Any of these will act as antigen, and your immune system will respond by producing memory cells. With these memory cells patiently waiting in your lymph nodes, you’ll have a faster and more robust immune response when you encounter the live version of that pathogen.

Over the course of my life, I’ve been immunized for measles, mumps, rubella, polio, tetanus, pertussis, and smallpox. Every year, I get an influenza vaccine. For teens and youth (and anyone who’s sexually active), I recommend that you get a vaccine for HPV (human papilloma virus). HPV can cause genital warts which, if untreated, can develop into cancer. One of these, cervical cancer, can be deadly. And if you’re traveling abroad, especially to tropical countries, you should consult the Centers for Disease Control and Prevention website to see what immunizations you should get before traveling.

Vaccination induces your immune system to develop memory cells that can quickly produce antibodies upon exposure to a specific pathogen. The result in immunity that can last for years (even an entire lifetime). Another outside means of giving a person immunity is by given them antibodies. This can happen in two ways.

To read a Wikipedia article about passive immunity, click here.

The quiz that follows has a few questions about immunological memory and vaccinations, but it also reviews the entire specific immune response. Enjoy!

Ok. I have no illusions. My immune system songs are long, and doing these interactive lyrics might take you a bit of time. But it’s time well spent, because it will deepen your understanding and help you remember the details. So enjoy! Depending on your learning preferences, you might want to watch the video first.