In the previous tutorial, we explored the basis of recognition. Here’s a quick summary. 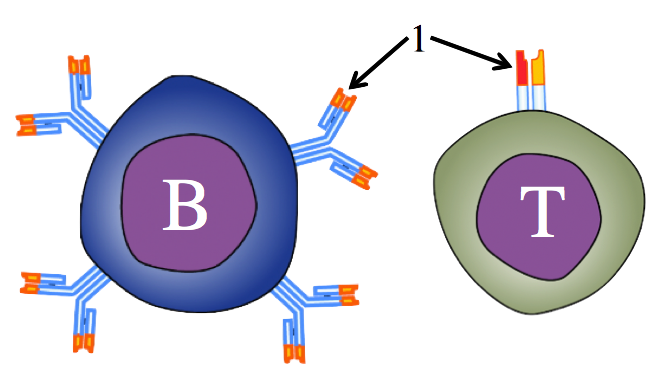 B and T cells are covered with receptors (only a few of which are shown in the diagram to your left, at “1”). Due to recombination and mutation of genes for receptors, we wind up with a vast army of genetically distinct B and T cells, each with uniquely shaped antigen binding sites.

If an antigen binds with a specific B or T cell, that cell is called into action, unleashing a series of events that eventually vanquishes the invading pathogen.

In this tutorial, we’ll look at how B cells are activated to release antibodies, a response that’s called humoral immunity. Let’s go.

2. The humoral response begins with phagocytosis at the infection site 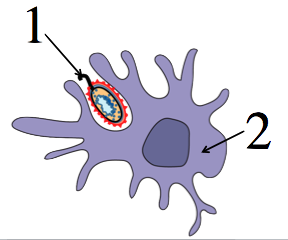 In the first tutorial in this series, I explained how a key part of the non-specific immune response was phagocytosis. During phagocytosis, our neutrophils, macrophages, and dendritic cells (represented at left by “2”) attack invading pathogens (“1”) and swallow them up.

For some phagocytic cells, that’s the end of their contribution to the immune response. But for other phagocytes, phagocytosis is just the first part of their job. Their next move is to relay the information about what they’ve engulfed to the specific immune response, so that weapons like antibodies can be unleashed.

This information transfer, along with much of the action to follow, occurs within the lymphatic system, a network of vessels and nodes that drains and monitors the body’s fluids. Note that the connection between B and T cells and the lymphatic system is the source of the name given to both types of cells: lymphoctyes.

Lymph vessels form junctions at lymph nodes. Lymph nodes are the kidney shaped structures in the diagram on the right. Think of them as a type of organic filter that checks the body’s fluids for pathogens. As we’ll see below, the lymph nodes are where much of the action involved in the specific immune response occurs.

So let’s imagine that you’ve been working in the garden. You prick your finger on a thorn. As the thorn enters your skin, scores of bacteria enter, too, and they start to multiply. As part of the inflammatory response, your phagocytes arrive on the scene. As noted above, two types of phagocytic cells — macrophages and dendritic cells — do more than just devour and destroy these bacteria. They also bring information about the infection to the specific immune response. Here’s how.

The process begins in step 1, with the phagocyte (“b”) devouring the pathogen (“a”). In step 2, intracellular digestion by the phagocyte will break the pathogen down to its molecular building blocks, shown at “c.” Each one of these molecular pieces is a potential antigen: a molecular piece that can stimulate the immune system. In step 3, the phagocyte uses a protein (indicated by “d”)  called a Class I Major Histocompatibility Complex (MHC, for short) to display the antigen (“c”). It’s as if the phagocyte has raised a flag and is shouting to the rest of the immune system, “Look what I’ve found!” This part of the phagocyte’s function is so important that cells like macrophages and dendritic cells are frequently called antigen presenting cells, or APCs for short.

The cell that’s primed to communicate with and respond to an antigen-presenting cell is the Helper T Cell. Helper T cells are often considered to be the generals in the immune system army. It’s an apt analogy, because the helper T cell assigns duties to other immune system cells, unleashing weapons targeted toward defeating the invader. But there’s not just one Helper T cell. The same processes of recombination and mutation that created diverse B cells, each with a uniquely shaped B-cell receptor, also created millions of Helper T cells, each with a uniquely shaped T cell receptor. In this battle, which one of these Helper T cells gets to be the general?

Use the images at left to follow the action. Imagine these Helper T cells waiting in lymph nodes. When antigen presenting cell (“b”) arrives, it will use its Class II MHC protein (“d”) to present its antigen (“c”) to the waiting Helper T cells (one of which is shown at “e”). This presentation is completely tactile. If the shape of the presented antigen doesn’t complement the shape of the T cell receptor, then another helper T cell will come along and “attempt” to bind (there’s no intention, of course, which is why I added the quotes).

But when the shapes complement each other (as shown in image 4, above), a weak intermolecular bond will form, keeping the helper T attached to the antigen presenting cell long enough for the helper T to grab on with an accessory protein called CD4 (shown at “g” in image 5). Once the APC and helper T are firmly in contact, the cells will secrete chemical messages, shown at “h” in image 6.

Many of these messages are cytokines. Cytokines have a variety of functions, but if you recognize a similarity between cytokine and cytokinesis, you’ve honed in on an important clue as to what cytokines do. These cytokines will induce cell division in the helper T cell. The result: many clones of the stimulated helper T, each one with a receptor for the antigen that was presented by the phagocyte in steps 1 through 6 above.

Note that, at this point, the immune system still hasn’t unleashed a response. But don’t worry: your infected finger is about to get some relief. There are now millions of cloned and activated helper T cells, each with a receptor for an antigen, waiting in a lymph node. What are they waiting for? 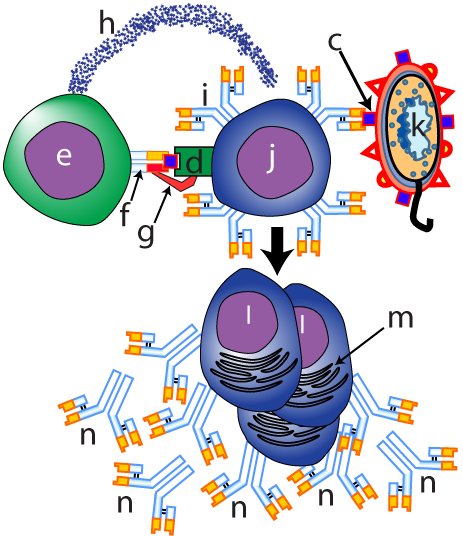 They’re waiting for a B cell (at letter “j” in the top-center of the image to your left) that has independently encountered the same pathogen (“k”). B cells are also phagocytic, and, like the phagocytic cell that started the recognition process, the B cell is displaying the antigen (represented by “c”) on its MHC class II protein (“d”). The key thing to notice here is the specificity involved in every step of this process. This B cell was only able to bind with the pathogen because it had a receptor (“i”) whose shape was complementary to the shape of a particular antigen on the invading pathogen. Similarly, the Helper T cell (“e”) is only able to bind to this B cell because its T cell receptor (“f”) is also complementary to the same antigen.

The plasma cells are essentially antibody factories. Because antibodies are proteins that are destined for export for the cells, they’re made in the cell’s endoplasmic reticulum, represented by letter “m.” The goal of the process is shown at “n:” antibodies with an antigen binding site that complements the shape of specific antigen on an invading pathogen.Over the next few days following maturation, plasma cells will secrete up to 2000 antibodies/second/cell. But what do these antibodies do? Let’s review the sequence of events that got us to this point, and then we’ll see.

[q]The next card shows 10 of the steps of the humoral response, with some information missing. Drag words to make each step complete.

6. Antibodies help neutralize pathogens in a variety of ways

Antibodies don’t directly destroy pathogens, but facilitate their destruction by other immune system components. Below, we’ll look at three ways in which antibodies work.

a. Neutralization of Viruses

To neutralize is “to counteract the activity of: to make ineffective.” Merriam Webster. That’s what antibodies do to viruses. You can see that in this image (which we looked at in a previous tutorial). By binding with surface proteins (2) on a virus (1), antibodies (3) block viruses from binding with the membranes of the cells that they parasitize. Again, notice the specificity of the interaction. If the antigen binding site of the antibody (4) didn’t precisely complement the shape of the viral antigen, then the antibody wouldn’t bind to the virus.

By binding with surface molecules on bacterial pathogens (2), antibodies (3) mark bacteria for attack by phagocytes (1).

c. Working with the Complement System

Complement (briefly discussed in my tutorial on non-specific immunity) consists of a team of proteins which can independently attack the membranes of invading cells. With the addition of antibodies, complement becomes even more effective. When antibodies (b) bind to antigens (c) on a pathogen’s membrane (d), the proteins in the complement system (a) become activated. These complement proteins form a membrane attack complex (e) that creates a hole in the membrane of the invading bacterial cell. Water and ions enter through these holes, causing the invader to burst from osmotic pressure.