Meet Brachiosaurus. This enormous ancient herbivore lived in North America about 156 – 145 million years ago. It was between 18 and 21 meters long. It’s estimated to have weighed between 28 and 58 metric tons (128,000 pounds).

Trilobites make up a clade with over 20,000 recognized species. They ranged in size from a few  millimeters (think of a ladybug) to about the size of a crab. However, one species was 72 centimeters long. Most crawled, but some swam. Some were scavengers. Others were predators. Trilobites were so numerous (and they were so easily fossilized) that you can buy a 500 million year old trilobite fossil for less than $20.

Here’s a reconstruction of Archaeopteryx. This transitional species had features of both dinosaurs (jaws with sharp teeth, a three fingers with claws, a long bony tail) and birds (feathers and flight). Archaeopteryx lived in Europe about 150 million years ago.

These are three extinct species. The total number of such species could be 5 billion.

2. Extinction is the flip side of speciation

There are as many as 8.7 million species alive on Earth today. But that number is a tiny fraction of all of the species that have lived during life’s 3.8 billion year history. It’s estimated that as many as 5 billion species have inhabited the Earth at one point in time or another. 99.9% of these species are extinct.

Extinction happens when a species can no longer exploit its ecological niche. That might be because of an environmental change that alters the niche, or because of a competitor that’s better adapted to exploit that niche. In some cases, a newly arrived predator or parasite might cause a species to decline.

True extinction— the death of the last member of a species — is final and forever. However, there are a few intermediate conditions along the road to extinction.

Because the system is a positive feedback loop, species that enter the vortex often quickly decline toward extinction.

4. The background level of extinction

Another way to talk about background extinction rate is to talk about species lifespans, or species survival rates. In the same way that we can talk about the average lifespan of a dog or a human being, it’s possible by looking at fossil data to determine how long a species can be expected to survive before becoming extinct. This varies for different taxa.

Extinction is a normal part of the history of life on Earth. If the rate of speciation and the rate of extinction are equal, then overall species diversity remains constant. However, there have been periods in Earth’s history when geological and even astronomical forces cause environments throughout much of the planet to significantly change. This alters many species’ niches to the point where they can no longer survive. Because the change occurs on a widespread (and even a planetary scale), no migration to a place of refuge is possible. This leads to a mass die-off called a mass extinction. 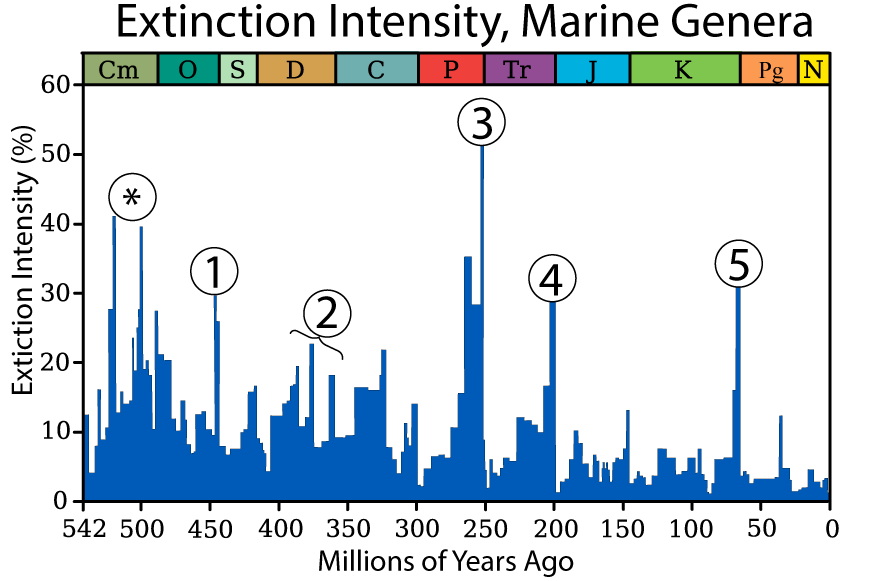 Five such mass extinctions have occurred since multicellular life emerged about 600 million years ago. You can see them as the peaks in the graph to the left.

The Y axis on this graph is extinction intensity. Extinction intensity, in this graph, is the percentage of genera (plural of “genus”) that were present at one period of time, but don’t exist afterward (because they became extinct). For example, find number 3 on the graph. The value is above 50%. What this indicates is that over 50% of the genera that were present at this time became extinct. Note that each genus can contain many species. This mass extinction, known as the Permian extinction, wiped out up to 95% of marine species and 70% of terrestrial species.

Two additional things to note about this graph:

What causes these mass extinctions? Let’s just look at two.

The 1998 movie Deep Impact is built around the premise of a similar impact occurring in modern times. The impact scene in the movie depicts how an oceanic asteroid strike would generate a tsunami that would devastate any nearby landmass. Two favors, please, before you watch a two minute clip of the movie. 1) I suspect that this clip might get taken down for copyright violation. If so, would you let me know? 2) If you’re in class, ask your teacher if it’s okay to watch. Here’s the link (it’ll open in a new tab).

6. What happens after mass extinctions? 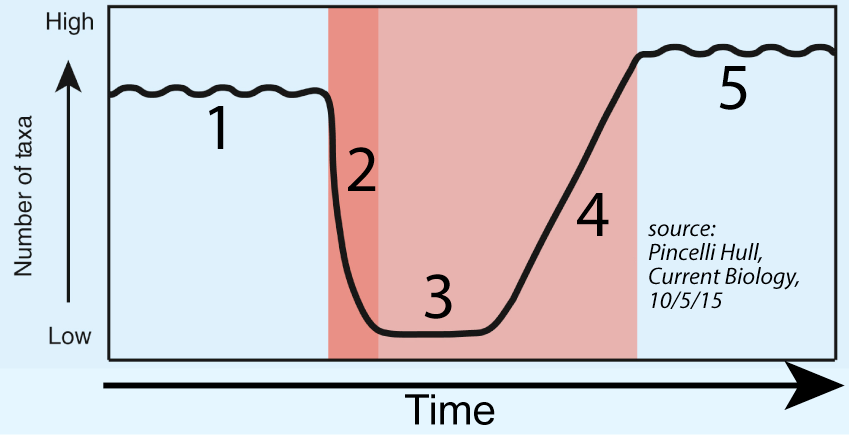 The graph to the left shows species diversity before, during and after a mass extinction event. Number “1” shows the number of taxa before the event. At “2,” you can see diversity plummet, reaching the bottom at “3.”

After “3,” the environment begins to recover. As a result, the survivors begin to diversify into the newly empty ecological niches. The result is an amplification of species diversity (shown by the rising line at “4”), ending in a new equilibrium between speciation and the background level of distinction (at “5”). 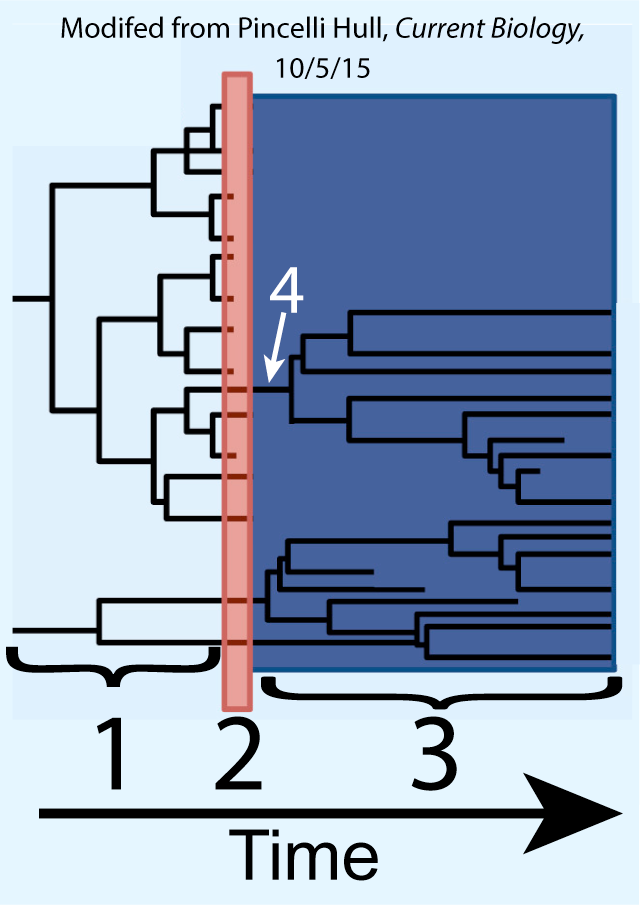 The graph to the right tells a similar story. “1” shows phylogenetic diversification leading up to a mass extinction, which occurs at “2.”

You can see how the mass extinction extinguishes most lineages. But some survive, such as the lineage shown at “4.” During the subsequent eons, the survivors get to experience their own adaptive radiation, which occurs during time period “3.”

Let’s apply this to the Cretaceous extinction, the one caused by the asteroid impact 65 million years ago. Among the lineages that came to an end were all the dinosaurs, as well as their marine cousins, like mosasaurs and plesiosaurs. But the mammals (which in this case would be the lineage at “4”) survived. With a few million years, all of the modern mammal clades (for example, the whales, dogs, bears, rodents, horses, bats, and primates) came into being.

The takeaway? Mass extinctions are terrifying. But they also set the stage for new diversification of life.

It’s widely agreed that a sixth mass extinction is in progress, and that we humans are to blame. We’ll cover that in a later module about human impact on biodiversity. But for now, consolidate your understanding by taking the quiz below.

[q] Extinction happens when a species can no longer exploit its ecological [hangman]. This might be because of a change in the [hangman], or the arrival of a better adapted [hangman].

[q] The rhinoceros isn’t entirely extinct: just [hangman] extinct in much of its former range.

[q] The positive feedback loop in which ecological disturbance lowers a population’s size to the point where it has less genetic variability, becomes less adaptable, which further lowers the population’s size is known as an extinction [hangman].

[q] The rate at which extinctions normally occur is called the [hangman] level of extinction.

[q multiple_choice=”true”] It’s estimated that _________ of the species that have ever existed are now extinct.

[q multiple_choice=”true”] Which of the following statements about point “3” is correct.

[q] In the graph below, which number indicates the mass extinction that wiped out the dinosaurs?

[q] In the graph below, which number indicates the mass extinction that’s known at the “Great Dying.”

[q] In the graph below, which number indicates a mass extinction?”

[q] In the graph below, which number indicates adaptive radiation following a mass extinction?”

[q] The graph below indicates how following a [hangman] [hangman] (at “2”), survivors (such as the one shown at “4”) can undergo [hangman] [hangman] as their descendants diversify into the ecological space vacated by the organisms that became extinct.

[q] In the graph below, which number indicates a lineage that wasn’t wiped out by a preceding mass extinction.

[q] In the graph below, which number indicates the mass extinction.

[q] In the graph below, which number indicates an adaptive radiation that follows a mass extinction.