While some behaviors, like the fixed action patterns described in the previous tutorial, seem to be hard-wired into the nervous system of an organism, most behavior emerges as the result of interaction between the organism’s neurological structure and its interaction with the environment. Behavior that emerges as a result of experience is called learned behavior. Let’s look at a few examples.

Imprinting is a type of rapid, phase-sensitive learning that has to occur during a critical period. Konrad Lorenz, an Austrian zoologist who shared the 1973 Nobel prize with Tinbergen, noted that Graylag geese would imprint on the first moving object they saw during the first hours after hatching, and would subsequently follow that object. In nature, that object is typically the goslings’ mother, making this an adaptive response. Lorenz manipulated this response, with the following effect.

1b. Learning Song in Songbirds

Songbirds include birds like warblers, thrushes, finches, and sparrows. These small birds make up almost half of the world’s 10,000 bird species.

Why do songbirds sing? Birdsong in the temperate zones is mostly a male endeavor, and it’s about proclaiming territory to attract a mate, and then letting other males know that the territory is occupied.

In non-songbirds (birds such as ducks, geese, hawks, grouse, and so on) the sounds produced are mostly instinctual. However, learning to correctly sing a species’ song in a songbird requires learning. Songbirds begin learning their songs while they’re still nestlings. This phase is a critical period: if songbirds miss this opportunity to hear the song of their species (which, for the most part, only happens in experimental settings), they’ll never learn it. During this period, nestlings will listen to the adults (typically their fathers) singing around them. After fledging (growing enough feathers for flight), juvenile songbirds begin to replicate these songs, and practice them until they can accurately reproduce them. (source: https://academy.allaboutbirds.org/birdsong/)

To create an accurate match between the song that they’re producing and the song they’ve heard from their fathers, young songbirds need to have memorized their father’s song. If young birds are isolated and kept from hearing their father’s song, they won’t be able to reproduce their species specific song. If they can’t hear their own song, their ability to produce the correct call will be further impaired.

The image above shows the results of a series of experiments in the 1980s demonstrating how birdsong learning works. Row “a” shows a sonogram of normal adult birdsong in swamp sparrows (Melospiza georgiana) and song sparrows (Melospiza melodia). Row “b” shows the song produced by juveniles when they were isolated and unable to hear adult songs during development. Row “c” shows the further impairment that occurs when juveniles are deafened and couldn’t hear their own songs during development.

In the 1920s, Niko Tinbergen, as part of his PhD thesis, carried out a series of experiments to try to determine what senses wasps used to navigate back to their nests after they’ve been out foraging for food.

The wasp that Tinbergen studied was Philanthus triangulum, also called the beewolf. That’s because these wasps prey on bees. The wasps lay their eggs in underground brooding chambers, which females create by digging into suitably soft ground.

Once the chambers are dug, the female wasps hunt for bees, which they paralyze with venom and then bring back to their brooding chambers. The female wasps then lay their eggs in the bee’s paralyzed body, which serves as food for the next generation of wasps.

Building a nest takes several days, and it may take several hunting trips to adequately stock the nest with food. In addition, other female wasps are building their nests nearby How does the wasp know 1) how to get back to the vicinity of her nest, and 2) how to distinguish her nest from other nests dug by other females?

Tinbergen investigated this through a series of field experiments. He started by finding areas with wasp nests. While the wasp was in its nest, Tinbergen surrounded the nest with a ring of pine cones.

Tinbergen already knew that an emerging wasp does an orienting flight where she circles around her nest a few times before flying out to forage.

To test if she was was orienting to visual cues, Tinbergen moved the pinecones a short distance away from the nest, and then waited for the wasp to return. When the wasp returned, Tinbergen counted how many times the wasp chose to go to the nest, as opposed to how many times she went to the center of the ring of pinecones. (Note: the Source for much of this account is “How to Design Experiments in Animal Behaviour,” by Raghavendra Gadagkar.)

[q labels = “top”]Tinbergen ran 105 trials with 17 different wasps. He did multiple trials/wasp by shooing the returning wasps away after they had made their decision, and seeing if they would repeat their choice. The labels above show the results. Drag the labels to the correct location.

As we’ve just seen with Tinbergen’s wasps, accurate movement through space is essential for survival and reproduction. Whether you’re an earthworm crawling through soil, a slow loris moving through the forests of Madagascar, or a wolf pack taking down a caribou calf that’s been isolated from its herd, moving and orienting are key to finding food, shelter, and mates.

As primates, our sensory system is highly geared toward vision, and it’s easy for us to think that animals simply look around, decide where they want to go, and go. But shrink yourself down to the size of an ant: because you’re so close to the ground, your line of site would be extremely limited. How would you know where to go? Once your home base was out of sight, how would you know how to find your way home. If you’re a social species (as ants are), how would you tell others what you’ve found?

Many species of ants navigate by using trail pheromones, a phenomenon that was first described by Harvard biologist E.O. Wilson in 1962. Pheromones are chemical substances released into the environment that affect the behavior and physiology of other animals of the same species. In other words, pheromones are like hormones, except for the fact that they’re released outside of the body, and instead of targeting another part of the body, they target another individual.

When an ant finds a food source, that ant will secrete chemicals that guide other ants to the food. As these pheromones diffuse from the trail into the surrounding air, other ants can find the trail, and reinforce it on their return to the colony. When the food source runs out, the returning ants stop secreting the pheromones, and the trail disappears.

Let’s look at another navigational adaptation found in ants. 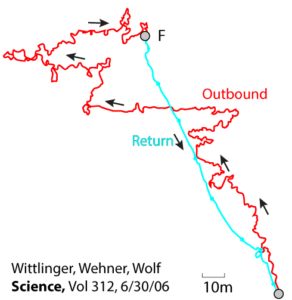 When ants are foraging for food, they move around in pathways that seem almost random (see the red pathway at left). After finding food, their return to their nest is direct (as shown by the turquoise pathway). How? Because ants are so low to the ground, they can’t see their nest and head back towards it. And if you’re thinking that the direct return is a function of the trail pheromones that we just discussed, note that this direct return happens before a pheromone trail has been laid down. The first foraging ant, after wandering around until it finds some food (red path), can directly return to the nest (turquoise path).

Since the early 1900s, it’s been hypothesized that the ants do this by counting their steps, integrating their turns into their count, and then computing a direct pathway back to their nest. In 2006, Matthias Wittlinger, Rudiger Wehner, and  Harald Wolf published the results of an experiment testing this hypothesis, working with Cataglyphis fortis, a desert ant species that lives in Tunisia (Northern Africa), where it forages for dead arthropods.

Here’s what they did. 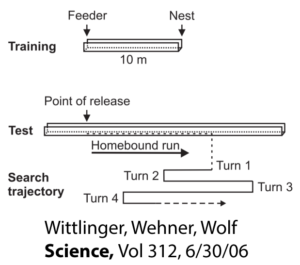 STEP 1: Train the ants. This involved letting the ants walk through a metal training channel from their nest to a feeder positioned 10 meters away.

STEP 2: Test the ants: This involved catching the ants at the feeding site and transferring them to a test channel. Once in the test channel, the ants head back to where they think their nest is. When they’ve covered that distance and not found the nest, the ants switch from a “straight and steady return path” to a “search trajectory,” marked by a 180 degree turn, followed by pacing back and forth around what they thought was the nest’s location. (Note: source for this and what follows is The Ant Odometer: Science, Volume 312, 6/30/06.

So,how did the ant know when it had gone a sufficient distance to get back to its nest? Was the step counting hypothesis correct?

Wittlinger, Wehner, and Wolf’s experiment tested the step-counting hypothesis by changing the length of the ants’ legs. They divided the ants into three groups (see the image in the quiz below):

[q]Here are the results of the first part of their experiment. The ants were trained with a food source that was 10 meters away from their nest. Leg lengths were normal on the outbound journey, and then modified for the return journey.

Which group was the stilts?

[q]Here (again) are the results of the first part of their experiment. Leg lengths were normal on the outbound journey, and then modified for the return journey.

Which group was the stumps?

[q]In the second part of the experiment, ants with modified legs were allowed to walk to a food source, then transferred to the test track on their return trip. What can you conclude from the results?

[q]Let’s think about what this experiment showed. The hypothesis that was being tested was that while foraging for food, the ants [hangman] their steps, keep track of their turns, and then compute a relatively  [hangman] path back to their nest.

[q]Experiment 2 was further confirmation of the hypothesis that ants compute the number of [hangman] on their return journey by [hangman] their steps on the outbound journey. Every group of ants was able to correctly compute the distance, despite the fact that the length of the  [hangman] of two of the three groups had been experimentally modified. As long as an ant could [hangman] the number of steps it took on its outbound journey, it could correctly estimate the [hangman] of steps required for the journey home.

[q]Behavior the emerges as a result of experience is called [hangman].

[q]A rapid, phase-sensitive type of learning that occurs during a critical period is called [hangman]

[q]The gosling’s behavior can be explained by the fact that they [hangman] on the wrong object (in this case, Konrad Lorenz

[q]The diagram below shows that songbirds, in order to learn how to properly sing the song of their species, need to be exposed to the [hangman] of a tutor (typically their during a  [hangman] period

[q]Ant trails work not by sight, but by the deposition of [hangman] that mark a chemical trail that ants can follow.

[q]The ant species C. fortis, which forages for food in the desert, can find its way back to its nest by [hangman]

its steps and tracking its [hangman].