In Unit 1 of this course, we devoted a tutorial to the structure and function of nucleic acids. Nucleic acids are the molecules of heredity, and they include DNA and RNA.

In this unit — Unit 6 — we’ll apply what we learned in Unit 1 to explain the biochemical nature of genes, and how genes (the units of heredity) get expressed in the phenotype (the observable appearance) of an organism. 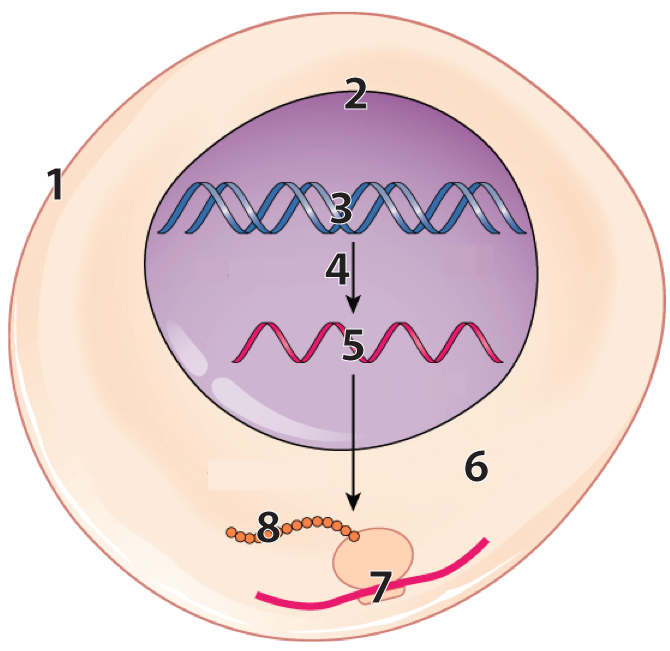 This diagram shows how gene expression works in a very simplified cell.

While the image on the right shows a simplified eukaryotic cell, keep in mind that with some minor differences, the processes of transcription and translation occur in prokaryotic cells as well.

The flow of information from DNA to RNA to protein is such a key idea that it’s called the central dogma of molecular biology. Dogma means “authoritative idea,” and as an AP Bio student, you need to understand the central dogma well. It’s usually expressed as DNA makes RNA makes protein.

Because many teachers put Unit 6 ahead of unit 5, I’ll continue to define genetic terms as we encounter them (just as I did above with genes and phenotype).

The plan for this unit is to start by reviewing and deepening our understanding of DNA. We’ll follow that with tutorials that look at the details of transcription and translation. Then we’ll look at the specifics of how these processes work in prokaryotes, eukaryotes, and viruses. We’ll end by looking at how, in the past three or four decades, humans have learned to manipulate the workings of DNA and gene expression, creating the fields of biotechnology and genetic engineering.

2a. Pyrimidines and Purines

Why is this important? In the early 1950s, as scientists were racing to determine the structure of DNA, it was realized that the width of DNA could only accommodate a purine binding with a pyrimidine, as shown below. 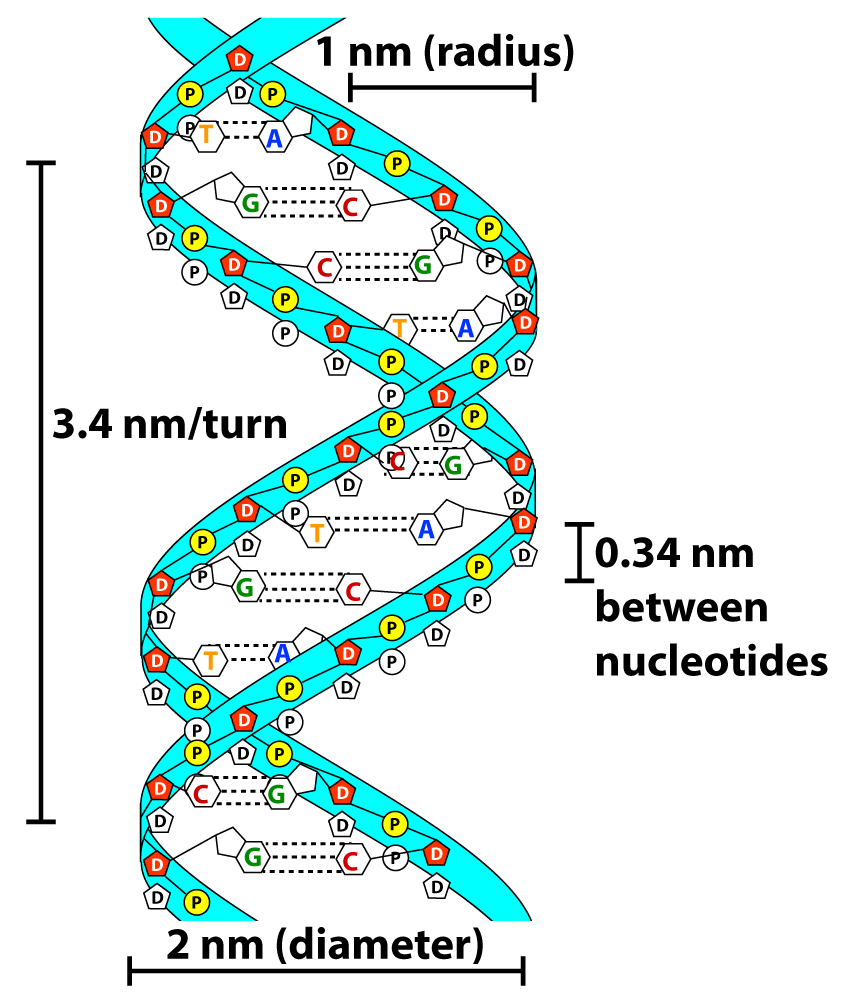 2b. Chargaff’s Rule: The evidence for A-T: C-G base pairing 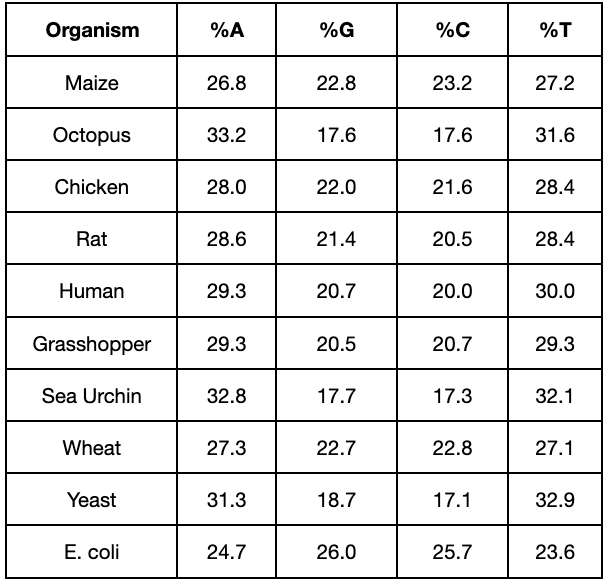 Though it’s not shown in the diagram above (and often not shown in published diagrams) complementarity between bases and hydrogen bond formation only happens when the nucleotides are positioned upside-down relative to one another, as shown below.

The result of this complementary base pairing is that DNA is typically double-stranded. Because the nucleotides in the two strands can form hydrogen bonds with one another only when they’re oriented upside-down relative to one another, the overall arrangement of the molecule is said to be antiparallel.

2c. How We Know that DNA is a Double Helix

DNA’s double helical shape was determined by studies using a technique called X-ray diffraction. In X-ray diffraction, an X-ray photograph is taken of DNA, creating the image shown below on the left.  Through some complex math, DNA’s structure could be interpreted as what’s shown on the right.

Note that this photograph was also the basis for determining the dimensions of DNA (shown above).

2d. Who were DNA’s discoverers?

James Watson and Francis Crick published a paper in Nature in April of 1953 describing DNA’s structure. Watson, Crick, and a third researcher (Maurice Wilkins) received the Nobel Prize for this discovery in 1962. However, a fourth scientist also deserves credit. Her name is Rosalind Franklin, and she took the photograph above and provided much of the data that Watson and Crick used to decipher DNA’s structure. But for at least two reasons, Franklin’s contribution is often overlooked. First, Franklin died in 1958, and the Nobel Prize is only awarded to living scientists (not posthumously). Second, Frankin was a pioneering female scientist working in what was, at the time, an even more sexist and male-dominated world than the one we live in today. There was so much drama in the relationship between Watson, Crick, Franklin, and Wilkins that a play was written about it. It’s called “Photograph 51” (named for the image above). It was written by Anna Zeigler. An audio-only version is available on SoundCloud.

If you want to read Watson and Crick’s 1953 paper, you can do so at Nature Scitable. Watson also wrote a book about the discovery of DNA called The Double Helix, which you can access as a pdf. To learn more about Franklin, read her biography on Wikipedia, or read Brenda Maddox’s Rosalind Franklin: The Dark Lady of DNA. 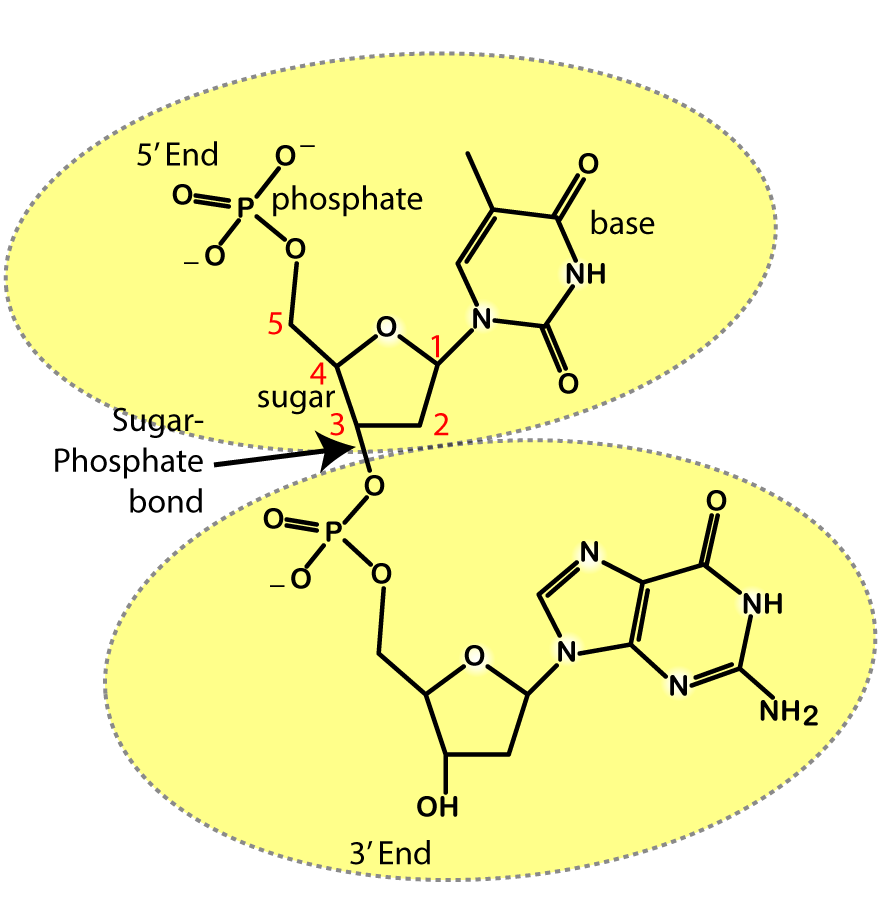 What does that mean? Look at the structural formula of the two DNA nucleotides that are connected by a sugar-phosphate bond to your right. A convention used by biochemists is to number the carbons in a sugar. Now look at the upper nucleotide, and find the # 1 carbon in deoxyribose. The # 1 carbon is the one that binds to the nitrogenous base. Now find the # 5 carbon: that’s the one that binds to a phosphate group. The # 3 carbon is the one that forms a sugar-phosphate bond with the next nucleotide.

The key thing to remember here is that during the synthesis of DNA or RNA, enzymes move in a 5′ to 3′ direction, always adding new nucleotides at the 3′ end.

My DNA, Fantastic Video will help you to review pretty much everything you need to know.  To read the lyrics, click here.

To make sure you’ve mastered what’s above, study the flashcards and take the quiz below.

[q]Using the diagram below, describe the basic flow of information in cells.

DNA (3) is the molecule of heredity. DNA gets transcribed into RNA (5), which carries information to ribosomes (7), which translate information in RNA into protein (8).

[a] DNA is the molecule of heredity. It’s the informational part of the chromosomes that get passed from one generation to the next during reproduction, and from mother cells to daughter cells during growth and development.

While RNA is a hereditary molecule in some viruses, its key role is information transfer, as in messenger RNA. RNA can also act as an enzyme, catalyzing reactions.

[q]Describe how the monomers of RNA and DNA are different.

[q]Use this diagram to identify the key parts of DNA

[a] DNA consists of two nucleotide strands. Within each strand, the nucleotides connect by sugar-phosphate bonds. The strands connect by hydrogen bonds between nitrogenous bases with complementary shapes: adenine bonds with thymine; cytosine binds with guanine. The binding requires that the nucleotides be oriented upside-down relative to one another. Hence, the two strands are antiparallel, with one strand running 5’ to 3’ in one direction, and the other running 5’ to 3’ in the opposite direction.

[q] Nucleic acids are life’s key information molecule. How do they store information?

[a] Nucleic acids store information in their sequence of nucleotides. That sequence can be translated into the primary structure of a protein, allowing information to become molecular structures that carry out specific functions (as in enzymes and other protein molecules).

[q] What are the base-pairing rules in DNA? Why are these rules important?

[a] The base-pairing rules allow for DNA to be accurately copied from one generation of organisms or cells to the next. The rules are A (adenine) binds with T (thymine) and C (cytosine) binds with G (guanine)

4b. DNA, RNA, and Nucleotides Quiz

[q] When parents pass genes on to their offspring, they’re doing it through the transmission of [hangman].

[q] To use an analogy from the kitchen, DNA provides a kind of [hangman] that cells follow by making two other types of molecules: one is another nucleic acid called [hangman] (shown at “5”); the second is [hangman] (a polymer of amino acids, shown at “8”).

[q] In multicellular animals like ourselves, DNA also guides the pattern of [hangman] by which a fertilized egg develops into a multicellular organism.

[q] The monomers of nucleic acids are called [hangman].

[q] Whereas DNA has the nitrogenous base thymine, RNA uses [hangman].

[q] In the diagram below, DNA is at

[q] In the diagram below, RNA that has just been transcribed is at

HINT FOR NEXT TIME: Deoxyribose is a five carbon sugar.
The number for the phosphate groups.

HINT FOR NEXT TIME: What letter does phosphate begin with?
The number for sugar phosphate bonds.

HINT FOR NEXT TIME: “D” represents the sugar deoxyribose. “P” represents a phosphate. What bonds connect them?
The number for nitrogenous bases.

HINT FOR NEXT TIME:  The nitrogenous bases are represented by the letters A, T, C, and G, and they connect by hydrogen bonds.
The number for a complete nucleotide.

HINT FOR NEXT TIME: You’re looking for something that consists of a sugar, a phosphate group, and a nitrogenous base.
The number for hydrogen bonds.

HINT FOR NEXT TIME: Hydrogen bonds connect the two strands of DNA, and are between the nitrogenous bases.
The number of the sugar-phosphate backbone.

HINT FOR NEXT TIME: The backbone consists of repeated sugars and phosphates.

HINT FOR NEXT TIME: A phosphate group has a phosphorus atom in its center.
Nitrogenous base

HINT FOR NEXT TIME: The nitrogenous bases have lots of nitrogen atoms.
Deoxyribose

HINT FOR NEXT TIME: Deoxyribose is a 5 carbon sugar.

[q]In DNA, the orientation of the two complementary strands is

[q]In a DNA nucleotide, the sugar is

[q]In the diagram of a DNA molecule below, which number is pointing to a phosphate group?

[q]During DNA replication, each parent strand serves as a _________ for the synthesis of a new strand

[l]translation of RNA to protein

[l]transcription of DNA to RNA

[q]In the diagram of a DNA molecule below, which number represents hydrogen bonds?

[q]The process shown below is