In the previous tutorial, we looked at homeostasis: how organisms maintain certain physiological variables around a set point. As an illustrative example, we looked at various adaptations for regulating body temperature, a highly regulated set point for mammals and birds.

While our focus in this course is biology, it’s useful to start our examination of negative feedback by looking at a mechanical thermoregulatory system that’s found in houses and apartments. I’m referring to the thermostat that works with a home’s heating system to keep the temperature in a home constant.

Here’s a diagrammatic representation of how a home heating system works.

The warming of the room feeds back (“6”) to the thermometer. Imagine the temperature rising to 67°F, then 68°F. At that point, the thermostat would send a message to the furnace to turn off.

This is negative feedback. Why is it negative? Because the output of the system (heat) turns the system off.

A home heating system provides mechanical homeostasis. Some homes have more elaborate systems, with both heating and cooling. 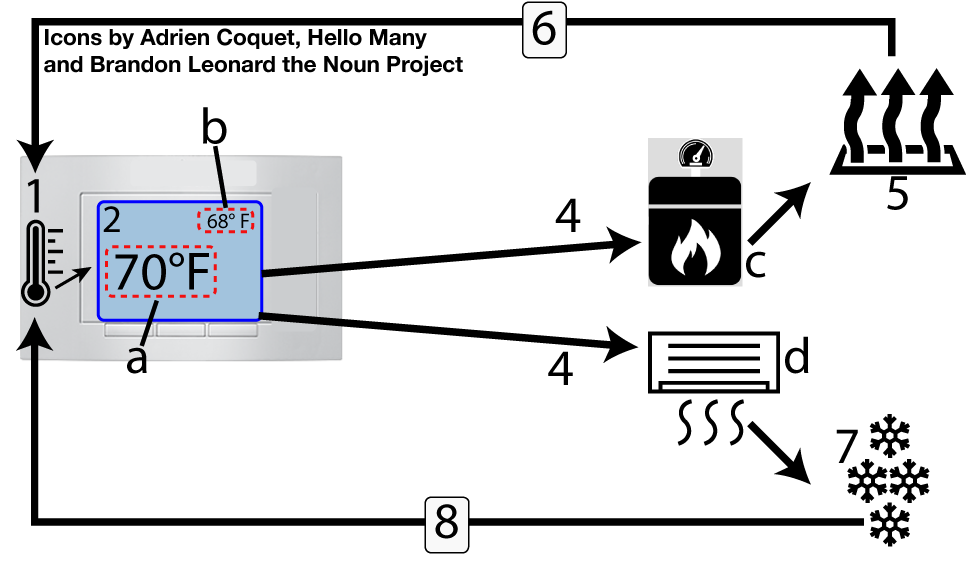 Imagine that it’s summer, and the temperature inside your home is climbing. Your set point is still the same (68°F/20°C). If the temperature climbs above the set point, then there’s nothing that the heater can do. But if you have an air conditioner (“d”) then your thermostat will direct the air conditioner to blow cold air into your house (represented by the snowflakes at “7.”) As your house cools, the temperature change will feed back (8) to the thermostat. When the temperature drops back down to the set point, the air conditioner will receive a message to turn off. Again, it’s negative feedback, because the system’s output turns the system off. But in the case of a home with both a heating system and an air conditioning system, it’s negative feedback with two antagonistic effectors, each with opposite effects. That, as we’ll see below and in the next tutorial, is a typical organization of homeostatic mechanisms in living things.

Note that “negative feedback,” in a biological context, is different from how we use this term in relation to human interactions, where it usually refers to criticism. Let’s say a student does badly on a test. Imagine that their teacher, in addition to handing back the test with a “D” written on it, also says “This is unacceptable!”  shaming the student in front of their peers. That might lead the student to try to do better, but it also might lead the student to avoid the teacher, and the class, leading to worse performance on the next test. By contrast, in biological systems, negative feedback is good: it returns the system to its optimal set point.

In mammals, body temperature regulation is under the control of the hypothalamus, a region deep within the brain that’s also responsible for regulating hunger and thirst (among its other functions).

The hypothalamus is shown above as a green-colored region within the brain (though please note that the green color was just to draw your attention). Like the thermostat shown above, the hypothalamus works through negative feedback.

When body temperature increases (B), the hypothalamus directs two responses. Letter “D” shows vasodilation, while letter “E” shows sweating. This combination of radiative and evaporative cooling cools the body (“F”) back to its set point.

When body temperature decreases, the hypothalamus directs the superficial arteries to vasoconstrict (“I”), which reduces radiative heat loss. Shivering (“H”) generates heat to warm the body. Together, these two responses return the body to the set point.

A positive feedback system found in the bodies of most vertebrates (including humans) occurs during blood clotting. A blood clot is a mixture of trapped red blood cells, cell fragments called platelets, and a variety of fibrous proteins (one of which is called fibrin). In the series of diagrams below, you can see how a clot forms over time.

The positive feedback loop associated with clotting mostly involves the behavior of the platelets.

4b. Oxytocin, Uterine Contractions, and Childbirth

Another temporary positive feedback loop is unleashed during the birth process.

To follow the process, start on the left side of the image on your right, at “A.” As a fetus grows, it starts to fill up all the space in a woman’s uterus. As a result, its head pushes against the cervix, the tissue at the bottom of the uterus.

Pushing against sensors in the cervix causes nerve impulses to be sent to the brain (B). These impulses are received by the pituitary gland, deep within the brain (C). The pituitary releases a hormone called oxytocin into the blood (D).

The process ends when the contractions cause the cervix to dilate enough for the fetus to be pushed completely out of the uterus during the delivery process.

A third example of positive feedback involves the ripening of certain types of fruit, including bananas, apples, tomatoes, kiwis, melons, nectarines, and peaches. As these fruits become ripe, they start to release a gas called ethylene. The ethylene acts as a ligand that binds with ethylene receptors in the endoplasmic reticulum in the cells of nearby fruit. Binding initiates a signaling pathway that activates a variety of genes that cause changes that lead the nearby fruit to ripen. As they do, these fruits synthesize and release ethylene, which has a further stimulatory effect.

When you think about fruit in your kitchen all becoming ripe at the same time and possibly rotting in your fruit bowl, this simultaneous ripening stimulated by positive feedback might not seem like an evolutionarily smart strategy. It might seem more like a recipe for fruit self-destruction. But think about what fruit are for: they’re a mechanism for dispersing seeds. So imagine a tropical fruit: a pre-agricultural banana, full of seeds. One effective seed-dispersal strategy would be for all the bananas on the tree to ripen at the same time. This will attract an entire troop of monkeys, who will devour the bananas, swallowing the seeds in the process. Since seeds are adapted to pass through the digestive tract of an animal unharmed, the result will be lots of banana seeds in the guts of lots of monkeys. When the monkeys defecate, they’ll spread the seeds far and wide.

Finally, important positive feedback loops are at work in ecosystems and the biosphere as a whole. 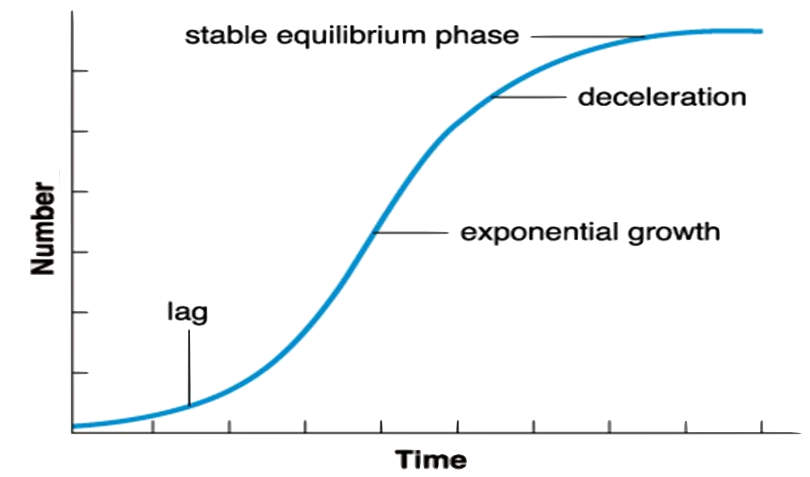 The warming of our planet caused by fossil-fuel-related carbon dioxide emissions is connected with several positive feedback loops. These are beyond the scope of AP Biology, but I encourage you to read about them in our tutorial on the Greenhouse Effect and Climate Disruption.

[q] The diagram below is showing a type of engineered homeostasis that works through [hangman] feedback.
x

[q] In the diagram below, number ____ is showing negative feedback that will turn off the heating system.

[q] In the diagram below, which letter or number indicates the set point?

[q] In the diagram below, which letter indicates a process that would result in evaporative cooling?

[q] In the diagram below, which letter indicates a process that would result in radiative cooling?

[q] In the diagram below, which letter indicates vasoconstriction?

[q] In the diagram below, which letter indicates a process that increases heat by causing rapid muscle contraction?

[q] In the diagram below, the part that’s acting as the thermostat is a part of the brain called the [hangman].

[q] In the diagram below, the letter “A” represents [hangman].

[q]During blood clotting, signals from damaged [hangman] vessels cause blood cell fragments called [hangman] to aggregate at the site of the wound.

[q]During the clotting process, each arriving cell platelet releases signals that attract more platelets. This type of feedback loop in which the system’s output leads to more output is called a [hangman] feedback loop.  These loops are often characterized by an [hangman] increase in intensity until the system shuts down (indicated by the line indicating platelet numbers over time).

[q]During the birth process, the enlargement of the fetus leads to the activation of pressure sensors in the [hangman] (the bottom of the uterus). This causes nerve impulses to be sent to the [hangman] gland in the brain, which releases the hormone [hangman]. This feeds back to the uterus, triggering contractions that increase pressure on the cervix. The overall system is thus a [hangman] feedback loop.

[q]In the diagram below, which number represents the release of the hormone oxytocin into the bloodstream?

[q]Fruit ripening is stimulated by a plant hormone called [hangman] gas. The release of this gas causes nearby fruit to also release the gas, leading to a rapid rise in hormone levels. That makes this process a [hangman] feedback loop.