This page is still under construction as I adapt it for HS use. In the meanwhile, please go ahead and use the AP Bio/College Bio version of this tutorial.

1. Sexual selection is based on the idea that certain phenotypes lead to higher reproductive success

[i]Here’s how to play. On the next cards, you’ll see males and females. Drag labels to correctly label each one.

What you saw in each of the examples above is called sexual dimorphism. This is a condition in which the bodies of females and males within a species are different.

Note that some features connected with sexual dimorphism seem to run against the adaptations that come about through natural selection. The tail feathers of a peacock take energy to grow. They reduce a peacock’s speed on land and make flying harder. Similarly, an animal with bright coloration is easier for a predators to spot. Why would these features evolve?

Sexual dimorphism isn’t found in all species. If you tried to play “Who’s male? Who’s female?” with the Canada Geese shown below, you’d have a very hard time with it.

But sexual dimorphism is very prominent in some species. Why does it happen? If the members of a single species, whether male or female,  are adapted to surviving a particular niche, why would they wind up having different features?

Sexual selection was described by Darwin in 1879, so it’s not a new idea. However, it’s a very deep idea, and what’s below only scratches the surface. Also keep in mind that the examples above and discussion below focus mostly on birds and mammals. In other animals, particularly insects and spiders, the drivers of sexual selection can be different, and can bring about very different results. Just check out the males and females of the spider, Argiope appensa. Guess who’s male and who’s female this time.

If you want to go deeper, you can start by reading this article in the NY Times, How Beauty is Making Scientists Rethink Evolution. 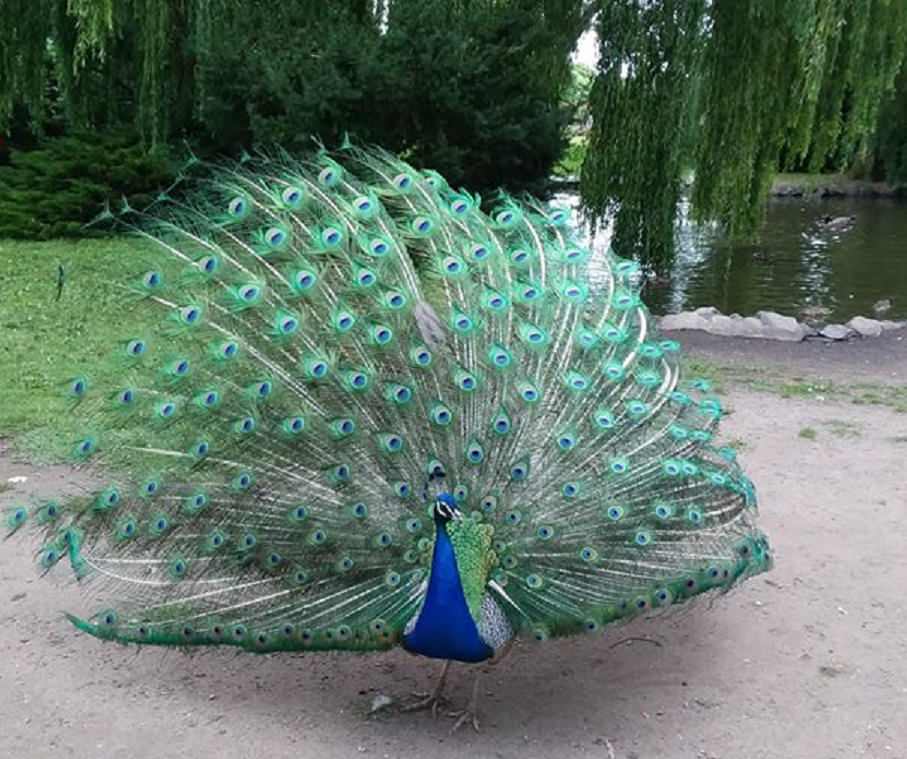 To use a spectacular example, let’s focus on peacocks. Note that properly speaking, only the males are peacocks. The females are peahens.

The most spectacular feature that peacocks have ( is their train of tail feathers. Peahens seem to prefer males who have trains with more eyespots. How do we know? In a study of peacock mating behavior led by Marion Petrie, the number of eye spots in a males’ was positively correlated with male mating success.

Let’s set some context. When it’s mating season for peacocks, here’s what happens. The description is from Sciencing peacock-features-8567066.

Beginning in mid to late spring, peacocks establish small territories in close proximity to one another in an arrangement known as a lek. They begin their courtship displays to attract the peahens, spreading their iridescent tail feathers in a fan shape, strutting back and forth and shaking their feathers to produce a rattling noise to get the peahens’ attention. A peahen will walk through several territories of different males, examining their displays and feathers closely, before selecting a mate.

Petrie and her team observed peacock mating and quantified the results. Here’s an excerpt from Petrie’s 1991 paper.

On no occasion did a female mate with the first male that courted her and, on average, females visited three different males. Females thus always reject some potential mates. For 10 out of 11 sequences ending in a successful copulation, the male ‘chosen’ at the end of a sequence had the highest eye-spot number among the males visited. These data support Darwin’s hypothesis that the peacock’s train has evolved, at least in part, as a result of a female preference.

On top of this, scientists have experimentally manipulated peacock trains. In one experiment, Petrie and her team removed eyespots from peacock trains. The result: “Peacocks with eye-spots removed showed a significant decline in mating success …compared with a control group.” (Behavioral Ecology and Sociobiology (1994) 34:212-217. This is not available on line, but you might be able to get it through a library that has access to JSTOR).

How does this system begin in the first place? That is harder to explain. Choosy females are “looking” for evidence of fitness in their mates. A peacock who can produce a huge, brightly colored train of feathers must, from this perspective, be fit. But how does the process start? Earlier in this evolutionary process, any arbitrary difference that females start to find “attractive” might be selected for. Once the process begins, the positive feedback loop described above can lead to explosive evolutionary change.

Note that females are not only choosing physical traits, but associated behaviors as well. Birdsong, courtship rituals, bower construction in bowerbirds, croaking in frogs, firefly light patterns are behaviors that are all thought to be driven by intersexual selection.

The Northern Elephant seal is an example of a species in which this system is at work. These animals live off the coast of California. Like all seals, they come on shore to breed.

Because breeding sites are limited, a male who can control a breeding area will have access to all of the females in that area. That sets off an evolutionary dynamic in which it males compete for control of breeding beaches. Who wins in a competition like this? Usually the larger and more aggressive male.

As with intersexual selection, a positive feedback loop results. Among elephant seals, males can be up to 13 feet long, and weigh over 4000 pounds. Females grow to be 10 feet long, but are less than half the mass of the males, averaging about 1300 pounds.

Size and aggressive behavior can be thought of as weaponry for intra-male competition. But sometimes the weaponry can be more obvious, as shown in the images to the right.

Not all sexual selection can be neatly categorized as intersexual or intersexual. In many systems, both types are at work. For example, while antlers are used in male-male competition, they’re also used to display strength and fertility. In addition, studies in Yellowstone National park have shown that wolves are more likely to attack males elk that lack antlers, which means that natural selection is at work, along with natural selection.

[q]Differences in form between the males and females of a species are called sexual [hangman].

[q]In [hangman] selection, members of one sex (typically males) compete with one another for reproductive access to the other sex.

[q]Male gorillas fight for control of a group of females. What kind of selection is at work?

[q]Male bowerbirds create highly decorated structures called bowers. Females examine these bowers. If they like them, they’ll mate with the male who made the bower. What kind of selection is at work?

[q]The difference in form between the male and female Goldie’s bird of paradise probably arose through what kind of selection?

[q]These elk are battling for dominance. What kind of selection is at work?

This tutorial ends this HS-Level module, Thinking Like Darwin. In most curricula, you’ll proceed to Population Genetics.