Biogeography is the study of the distribution of plants and animals. For example, half of the mammals in Australia are pouched mammals. Mammals with pouches are known as marsupials and include kangaroos, koalas, and wombats. By contrast, North America has only one (the Virginia opossum). Why do so many marsupials live only in and around Australia, and nowhere else? That’s a biogeographical question.

Biogeography reflects the history of how species have spread out over the Earth’s surface. Not surprisingly, biogeography also provides evidence for evolution.

Take a look at the following plants.

[q] If you (like most people in North America) had to guess what type of plants were shown in the previous slides (one of which is shown below), what would you guess? Most people guess a six-lettered plant family: [hangman]

[f]IFJpZ2h0JiM4MjMwO1RoYXQmIzgyMTc7cyBpbmRlZWQgd2hhdCBtb3N0IHBlb3BsZSB3b3VsZCBndWVzcywgYnV0IHRoYXQmIzgyMTc7cyBub3QgY29ycmVjdC4gVGhlc2UgcGxhbnRzIGFyZSBhbGwgZXVwaG9yYnM=LiBFdXBob3JicyBhcmUgc3VwZXJmaWNpYWxseSBsaWtlIGNhY3RpLCBidXQg[Qq]not closely related to them. Euphorbs live in the deserts of Africa, Asia, and the driest parts of Europe. Cacti, by contrast, are mostly limited to North and South America.

Read below to see how this relates to evolution.

[x]Read on to see how convergent evolution supports evolutionary theory.

Why do distant areas with similar climates support unrelated species that, like cacti and euphorbs, have similar adaptations?  Because of descent with modification. Over the course of evolution, one lineage of plants became adapted to the deserts of North and South America. This lineage gave rise to the cacti. Another lineage became adapted to the deserts of Eurasia, Africa, and Australia. This lineage gave rise to the euphorbs. If you look superficially, they’re similar. But a deeper look (one that includes, for example, looking at their DNA), reveals that these species aren’t closely related.

Study the pairs of animals in the diagram below. 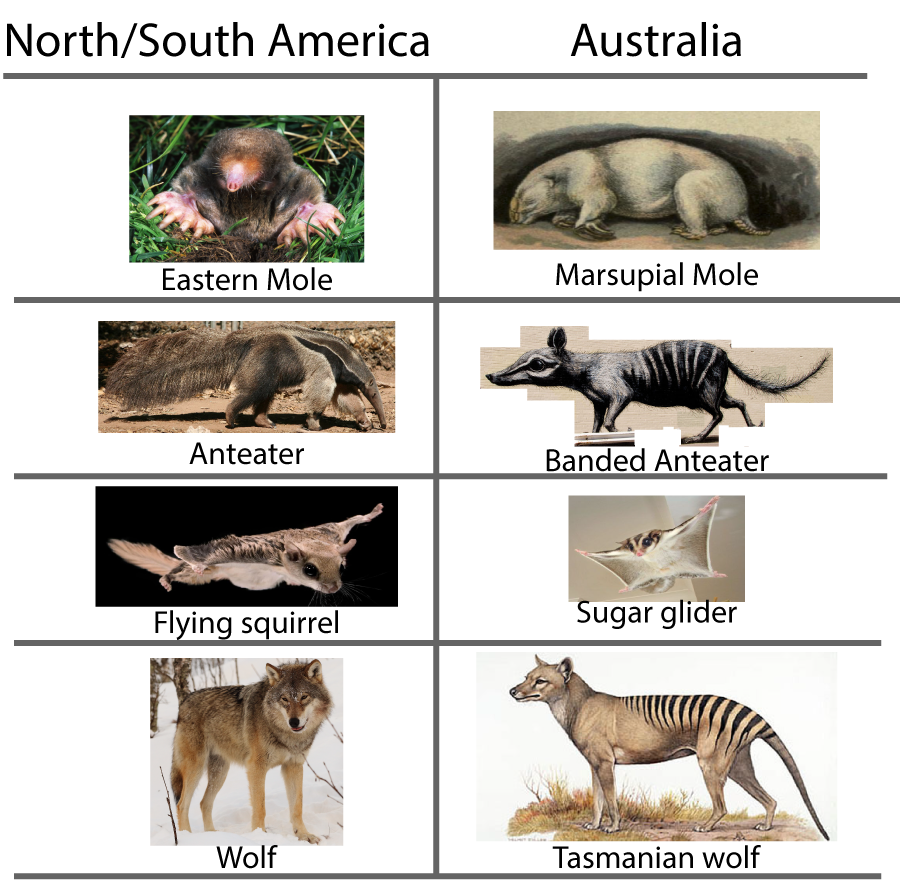 Again, the key point is that the similarity is superficial. The marsupial sugar glider and the flying squirrel have evolved similar adaptations, enabling both of them to glide long distances. But in terms of evolution, these two species are distantly related. Similar natural selection upon their ancestors led each of these species to independently converge upon a gliding form.

[a]The study of the distribution of plants and animals.

[a]A biogeographical question might be “Why are marsupial mammals so common in and around Australia, but so rare in other places?”

[a] Convergent evolution is the process by which similar selective pressures act upon distantly related lineages, resulting in superficially similar adaptations in the descendants.

Look at the three organisms below.

An ichthyosaur is an extinct marine reptile that perished at the same time as the dinosaurs became extinct, 65 million years ago. But from its fossils, we know that it had a streamlined shape, similar to that found in sharks and dolphins. The similar form shared by all three animals is not from common ancestry. It’s an example of convergent evolution. In each group of animals, similar selective pressures resulted in similar adaptations.

It’s important to keep the terms analogous and homologous (and the related nouns analogy and homology) distinct.  Practice their definitions.

[q]What are analogous forms or structures?

[a]Analogous forms or structures are superficially similar forms that result from convergent evolution.

[a]Homologous structures are structures that are inherited from a common ancestor and which have evolved different functions.

Now answer the questions in the quiz below.

[q multiple_choice=”true”] The beak of a platypus (a mammal) and the beak of a duck (a bird).

[q multiple_choice=”true”] The forearm of a human being and the flipper of a dolphin.

[q multiple_choice=”true”] WARNING: Think carefully! The wing of a bird and the wing of a bat are both adaptations for flying. Both birds and bats evolved (separately) from non-flying, ground-living ancestors. The wings are

[q]This diagram is saying that the streamlined form of sharks, dolphins and ichthyosaurs is an [hangman] feature. That’s because this form evolved from [hangman] evolution, and not from a common [hangman].

[q]The study of the geographic distribution of species is called [hangman].

[q]Species such as the euphorbs of Africa, Eurasia, and Australia and the cacti of the Americas are similar because of [hangman] evolution. Similar natural [hangman] resulted in the evolution of similar [hangman] in each group.

[q]The euphorbs of Africa, Eurasia, and Australia and the cacti of the Americas aren’t particularly closely [hangman]. Their superficially similar adaptations weren’t inherited from a common [hangman]. The best way to describe them is as [hangman] traits.

[q] [hangman] traits results from shared ancestry. There is a similar underlying structure, but the [hangman] might be different.

[q][hangman] traits result from convergent evolution. The function of the part might be similar, but the underlying [hangman] is usually quite different.

[q]REVIEW: Homologous structures, like the beaks of the Hawaiian honeycreepers shown below, evolve through [hangman] [hangman]. All of these Honeycreepers, in other words, share a common [hangman]. Over time, each species’ beak became [hangman] to a slightly different food source.

[q]The beaks of the platypus and the duck are [hangman] structures that arose through [hangman] evolution.