In the last tutorial, we looked at the structure of DNA.

DNA’s structure lends itself to replication. That’s essential for a molecule that gets passed from one generation to the next during reproduction, and from one cell to the next as an organism grows and develops.

DNA replication is one of life’s most essential processes. In your body, it’s happening all the time. Every time one of your cells divides—a key part of how you grow and maintain yourself —  all of the DNA in that cell needs to be replicated. On a very big-picture level, here’s what that looks like. Note how the chromosomes in the parent cell on the left are being copied (arrow 1) then pulled apart (arrows 2 and 3) to create daughter cells (arrow 4) that have chromosomes that are exact duplicates of those in the parent cell.

If you go down to a molecular level, here’s what replication looks like.  Two new molecules of “daughter” DNA are made from one molecule of “parent” DNA.

DNA’s structure explains how cells can do this. Here’s how I explain this in the first two verses of my  DNA Replication music video.

DNA’s structure with its bases complementary
Makes replication easy, but not quite elementary
Since A only bonds with T and C with G
The Double Helix seems to copy naturally,

Or as Crick and Watson said:

In what follows, we’ll explain how replication works.

3. During DNA Replication, each strand serves as a template for the synthesis of a complementary strand

Here’s a big picture view of what happens during DNA Replication.

This model of replication is called semi-conservative: in each new daughter molecule, one strand is old (from the parent), and one strand is new. You can see this in the color coding of the diagram below. The original DNA is colored red. The newly synthesized strands are colored orange.

Here’s the same explanation in verse:

You first unzip the DNA in one or more places,
Breaking hydrogen bonds to separate the bases.
Each resulting single strand serves as a template,
Allowing enzymes to replicate

Meselsohn and Stahl proved in ‘58 (read about their experiment)
That this is how the double helix replicates
One strand new, the parent strand preserved,
In other words the whole thing is semi-conserved

[q] Copying of DNA is also know known as [hangman]

[q] During replication, each strand acts as a [hangman] for synthesis of a new strand.

[q] To start the process of replication, an enzyme called helicase needs to break the [hangman] bonds (shown below) that hold the base pairs together.

[q] Replication ends as enzymes create covalent bonds between the sugar [hangman] on one nucleotide and the phosphate group on the next nucleotides.

[q] Replication ends as DNA polymerase creates a covalent bonds between the deoxyribose sugar on one nucleotide and a [hangman] group on the next  nucleotide.

[q] The result of replication is two daughter DNA molecules, each of which has one [hangman] strand and one old strand.

[q] Because [hangman] results in daughter strands that are half new and half old, replication is called semi-conservative.

[q multiple_choice=”true”] At the start of replication, an enzyme breaks open the helix. That enzyme is called

[q multiple_choice=”true”] During replication, the enzyme breaks that creates sugar-phosphate bonds between one nucleotide and the next is

5. How DNA replication occurs in cells

Imagine that you were given the task of taking a paper cutout model of DNA (like the one at left) and replicating it. You’d  probably find this to be pretty easy. After all, you can see the bases, think of the base pairing rules, and manipulate the model (pulling it apart, adding new nucleotides, etc.) to create two new daughter strands from the parent strand.

How can cells, which can’t see or think, perform this task?

Cells do this all by enzymes, which have to do everything by touch and feel. You learned about two of these enzymes above. What follows expands and deepens that discussion.

The structure that results from the opening of the helix is called a replication fork.

Check out this amazing electron micrograph. It’s showing DNA replication in the nucleus of a eukaryotic cell. Each of the white arrows is pointing to a replication bubble. 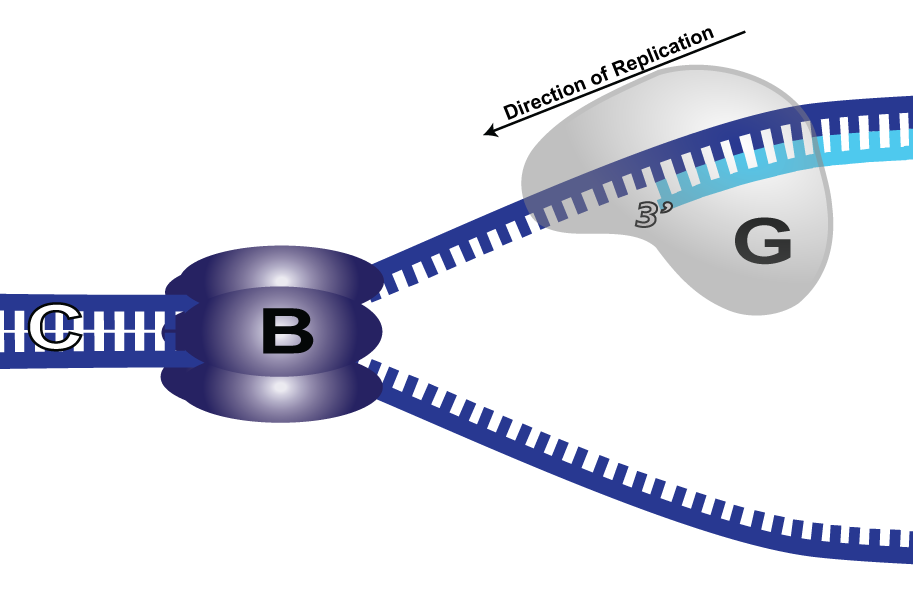 The process I described above is simplified model of some of the key events of DNA replication. But it’s actually much more complex. Watch this computer animation from the Howard Hughes Medical Institute. Unbelievably, the model below is also a simplified version of the process.

Because of the different sizes and organization of the genomes of prokaryotic and eukaryotic organisms, there are differences in how DNA replication proceeds in these two groups of organisms.

We’ll start with DNA replication in bacteria. In the diagram below, “A” represents the parent cell, and 4 represents its DNA. The other parts shown are the cytoplasm at “3,” the membrane at “4,” and an outer capsule (found in many bacteria, at “1”).

Bacteria have a single, circular (or looped) chromosome (as shown in “1” below). Replication begins at an origin of replication, shown at “A” in diagram 1.  Helicases (at “D”) open up the helix, creating two replication forks (at “C”). DNA polymerases (at “B”) synthesize new strands of DNA.  “E” represents the ever-widening replication bubble.

When replication is complete we have two daughter strand, each a perfect copy of the parent strand at “1.” 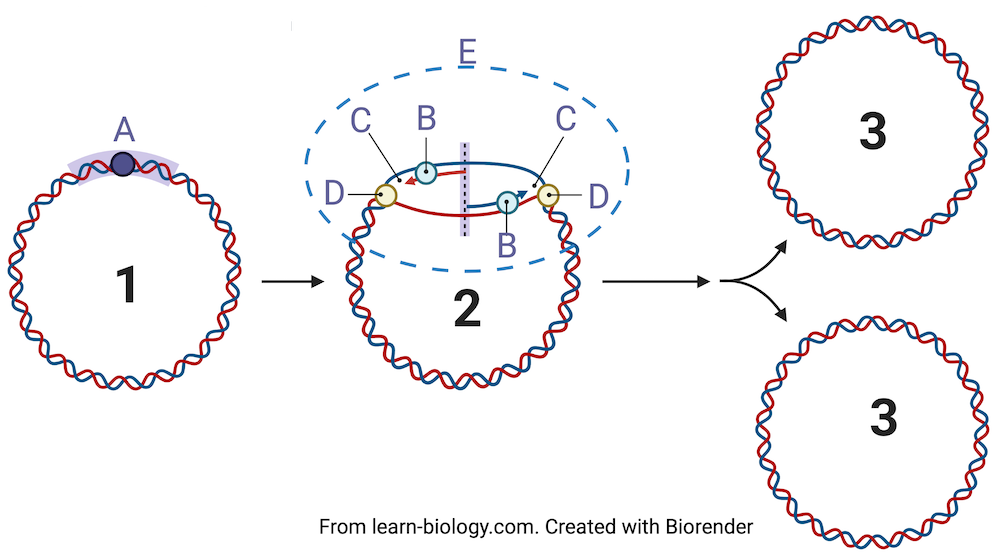 In terms of DNA replication, eukaryotic DNA differs from prokaryotic way in two notable ways. First, eukaryotic DNA is organized into linear chromosomes. That means that rather than a circular loop of DNA, the chromosomes have a beginning and an end. The diagram below shows a chromosome in a fruit fly. Fruit flies are among the most studied organisms on Earth. This diagram shows some of the genes on this chromosome, and the distance between these genes. 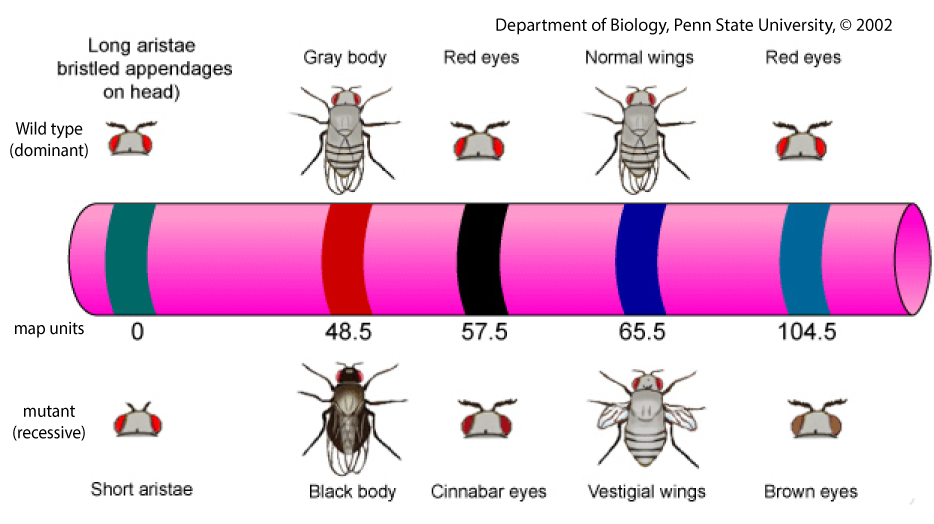 That’s all you need to know about DNA replication. Take the quiz below to consolidate your learning.

[q] In the diagram below, the origin of replication is at

[q] In the diagram below, DNA polymerase is at

[q] In the diagram below, helicase is at

[q] In the diagram below, what letter represents a replication bubble?

[q] In the diagram below, you know what’s being represented is DNA replication that would occur in a [hangman] cell. That’s because the DNA is [hangman].

[q] In the diagram below, you know what’s being represented is DNA replication that would occur in a [hangman] cell. That’s because the DNA is [hangman].

[q] In the diagram below, what letter represents the origin of replication?

[q] In the diagram below, what letter represents newly synthesized complementary DNA?

This ends this high school level module on DNA structure and Replication. In most courses, you’ll move on to RNA, Transcription, and Translation (HS version), but check with your instructor first. You might also want to check out my DNA Replication Rap (a salsa-themed music video, with AP and College Level content).