In the last tutorial, we learned that at any moment, a gene pool has specific allele frequencies. For example, here are two types of mice found in the deserts of the southwestern United States.  The letters above the photographs show the genotypes. The images below the photographs show how pigment gets deposited onto the hair of the mice.

Here are the five conditions that keep allele frequencies from changing.

Looking over that list, you might be thinking: “how could there be such a population? Isn’t there always natural selection? Aren’t some organisms more attractive than others, and more likely to find partners to mate with?” Those are great questions, and that’s exactly the point.

The five conditions listed above make up what’s called the Hardy-Weinberg principle. The kind of population described by this principle is an idealized one that never exists in nature. It’s important because it gives us a standard of comparison to understand evolutionary change. That’s because if any of these conditions aren’t met, allele frequencies will change. And if allele frequencies change, then evolution is happening.

Here are a few key points to take away.

With this perspective in mind, let’s look natural selection in light of the Hardy-Weinberg principle.

In the first tutorial in this module, we looked at Darwin’s and Wallace’s explanation of how adaptation comes about through natural selection. Now we can look again at their ideas, using insights from population genetics.

Natural selection is frequently summarized as “survival of the fittest.” In a population genetics context, you can think of natural selection in terms of phenotypes and genotypes. Individuals who have phenotypes with some type of advantage will be selected for survival by the environment. The individuals that survive will get to pass their alleles on to the next generation. Over time, the gene pool of that population will have more copies of alleles that code for beneficial phenotypes, and less copies of alleles for harmful traits. The key idea is that through selection of phenotypes, natural selection changes the allele frequencies in a population’s gene pool.

What are they selecting them for? For survival and reproduction. In other words, in the same way that during the process of artificial selection breeders select the most desired trait, the birds are selecting the best adapted trait. In response, over time, allele frequencies will shift to match this selective regime. 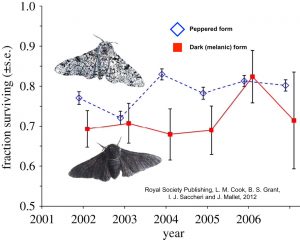 The graph on the left presents data from experimental studies by Michael Majerus. Majerus was evaluating the hypothesis above: that selective predation by birds could cause moth populations to evolve over time.

Majerus released dark and light forms of the Peppered moth (Biston betularia)  into the environment and then recaptured them.  He found that in a forest consisting of light colored tree trunks, dark colored moths (the melanic form) were recaptured at a lower rate that the lighter colored, peppered form. The lower recapture rate of the darker moths reflects a higher rate of bird predation, something that Majerus was able to directly confirm by observation of birds eating dark colored moths.

Note that the difference in survival didn’t happen every year. But averaged out over the years of the study, the difference amounted to a 9% lower probability of survival for the darker forms compared to the lighter forms. This difference, compounded over time, is enough to explain why light forms predominate in forests with light colored tree trunks.

On a much longer time scale, the biologist Sean Carroll has used natural selection to explain a remarkable adaptation in an ice fish that lives close to Antarctica. This fish has blood that’s almost completely clear—not red like your blood, or the blood of other fish. The reason why the blood is clear is because it lacks red blood cells, which carry the iron-rich, oxygen-absorbing protein called hemoglobin. The reason why these fish lack red blood cells is to keep their blood (and body tissues) from freezing solid in the frigid water around Antarctica. Fewer blood cells means lower blood viscosity (thickness), keeping blood moving even in freezing temperatures.

How could this have evolved? Over the past tens of millions of years, Antarctica has drifted southward to its current position, becoming colder and colder. As it did, the ancestors of these ice fish that produced less red blood cells (a phenotype), survived better, because they experienced tissue damage from freezing less often. At the same time, because cold fluids can hold more oxygen, the lack of red blood cells was not a survival disadvantage. Looking into these fish’s DNA, you can see how this happened. The alleles for hemoglobin accumulated mutations that prevented hemoglobin from being produced. These mutated alleles became fixed in the ice fish population. What would have been a deadly mutation in another species became a life-sustaining allele in the ice fish (See Sean Carroll, The Making of the Fittest, or read an excellent summary of his work here).

At this point, we can address a common misunderstanding. Have you ever heard somebody say “I used to do that, but now I’ve evolved.”?  Evolutionarily speaking, that’s incorrect. Individuals, from an evolutionary point of view, don’t evolve. Populations evolve.

Think of the Rock Pocket mice above. If they blend in with their environment, their chance of surviving and reproducing goes up, because their chance of getting eaten by predatory birds goes down. But individually speaking, the mice themselves aren’t evolving. They’re getting selected. The same is true of individual peppered moths, or individual ice fish, or any other individual organism. Individuals don’t evolve. What’s evolving are the allele frequencies in a gene pool.

[q]The Hardy-Weinberg principle says that if 5 conditions are met, then the allele frequencies in a population’s gene pool will remain the [hangman] over time.

[q]This question is based on the Hardy-Weinberg principle.

For the allele frequencies in a population to remain the same, mating must be [hangman]. In other words, when individuals mate, no phenotype can be more attractive (or repulsive) than any other phenotype.

[q]This question is based on the Hardy-Weinberg principle.

[q]The unit of evolution in biology is a

[q]Evolution is a change in [hangman] frequencies in a populations [hangman] pool.

[q]A student made up this graph to represent peppered moth evolution in response to industrial pollution in the 1800s. The student’s basic idea is that darkening of forests lead to [hangman] predation of light colored moths, and increased survival of [hangman] colored moths.

[q labels = “top”]Rate the survival prospects of each of the mice below.

The type of natural selection described above moves the average phenotype in a population in one consistent direction. In the case of the peppered moth, the darkening of tree trunks set the stage for birds who ate moths to select moths with darker coloration. Over time, as pollution continued to darken the forests, the number of moths with the dark phenotype increased, and the number of moths with a lighter phenotype decreased. This, in turn, changed the underlying allele frequencies. In the case of the ice fish, you can imagine that over the millions of years during which this adaptation took place, the amount of red blood cells/unit volume of blood steadily decreased, as did the amount of hemoglobin.

This type of natural selection is called directional selection. If you were to graph the frequency of the some trait (size, color, enzyme activity, etc.), it would look like what’s shown below. The average moves in a specific direction. For example, as the giraffe was evolving, the average length of the neck and legs was increasing. Or, in the case of the peppered moth, the average amount of pigment increased. For blue whales, it’s increasing size. For jackrabbits, it’s heat tolerance. For rattlesnakes, it’s venom toxicity. For cheetahs, it’s running speed.

Selection doesn’t have to push in one direction. There can also be selection for the average, and away from the extremes. This is called stabilizing selection, and, if graphed, it looks like this: 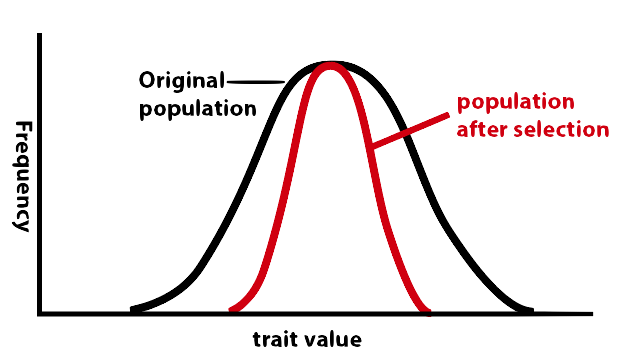 Think about the birthweight of babies. Babies that are too small have various problems that lowers their survival rate. But babies that are too large (think back to the times before Cesarian births could be safely and successfully performed) can be difficult for their mother’s to deliver, also lowering survival rate. So, if the trait is birthweight, then nature is selecting against both birth weights that are too low and those that are too high. The result is stabilization around a mean (which in babies of European descent is about 3.5 kilograms (7.7 lbs), with all but 5% of babies born between 2.5 and 5 kilograms).wikipedia

[q topic=”natural_selection_in_gene_pools” multiple_choice=”true”] When you’re looking at an organism, you’re directly looking at its

[q topic=”natural_selection_in_gene_pools” multiple_choice=”true”] In the rock pocket mouse, allele “b” codes for light coloration. Allele “B” codes for darker coloration. This is shown in the table below. In a desert environment with light colored sand, what would be selected?

[q topic=”natural_selection_in_gene_pools” multiple_choice=”true”] In the rock pocket mouse, allele “b” codes for light coloration. Allele “B” codes for darker coloration, as is shown in the table below. If a population of mice is living on dark, volcanic rock, which of the following would most likely be correct.

[q]What type of selection is being illustrated below?

What type of selection is being illustrated below?

Proceed to the next tutorial in this series: Why Harmful Recessive Alleles Don’t Disappear