Looking for a student learning guide? Go to the main menu for your course.

1. We’re all built from the same stuff: the four families of biological molecules

Think of the five most different living things that you can imagine.

I think of the California redwoods, the Archaea (prokaryotic cells) that live in the hot springs of Yellowstone National Park, bread mold, horseshoe crabs, and Orcas (also known as killer whales). But these organisms, despite their different forms, sizes, and ecological niches, are built from the same four types of molecules. Ignoring the water which makes up most of the mass of any organism, they’re each composed of carbohydrates, lipids, proteins, and nucleic acids.

Except for nucleic acids, these molecule families are probably familiar to you, because they’re also food groups (the lipids, as you’ll see in a moment, include the yummy and calorie-rich fats and oils). To start to get to know them, take a moment and study the list below.

When we speak of these molecules collectively, two terms are commonly used (and in what follows, I’ll use both):

Note that these terms aren’t perfectly synonymous. There are, for example, lots of synthetic macromolecules (that aren’t biological).

We’ll get to know important details about each of the biomolecule families later in this set of tutorials. But now let’s turn to a related point. Many biomolecules (carbohydrates, proteins, and nucleic acids) are built of one or more building blocks called monomers. Note the prefix “mono,” which indicates “one” (as in monorail, monotheism, monosyllabic, etc.) 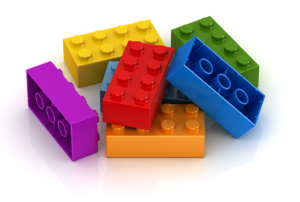 To get a sense of how monomers are used, let’s think about Legos. Legos are composed of a plastic called acrylonitrile butadiene styrene (ABS). But children around the world don’t need to know that or think about it. They just combine individual lego bricks into larger structures, with new attributes. One Lego brick is just a brick. A few hundred can be the Millenium Falcon.

In biological systems, monomers work the same way. Glucose, shown on the left, is one of the monomers of carbohydrates. It’s a simple sugar that’s made by plants, and which is used as an energy source by both plants and animals.

As you can see, glucose is made of carbon, hydrogen, and oxygen atoms. When glucose is consumed for energy, the bonds between those atoms are important (because they’re a source of energy). But when cells need to build something out of glucose, they use glucose as a unit, not “worrying” about the atoms that make up glucose (the scare quotes are there because cells, of course, don’t “worry” about anything…)

Here’s an example. Plant cells can combine glucose molecules together to form starch. As with our Legos, the monomer and what it gets made into have different properties. Glucose is sweet. It dissolves in water. Starch, by contrast, has one insoluble form, and you know that starchy foods (bread, pasta, rice) aren’t sweet.

Take a moment and study the diagram of starch below. Note that the glucose monomers are drawn slightly differently from what’s above, but you should be able to see that starch consists of a chain of glucose molecules. Also, note that while less than 10 combined monomers are shown below, the chain could go on and on for hundreds of units.

Chaining monomers together, as in the example of starch above, creates polymers, larger molecules that are built of two or more chemically combined monomers. The prefix “poly” means “many,” as in polytheism or polygon.

In addition to having different properties from their monomers, polymers are much more diverse than monomers. A useful analogy is to think of letters and words, with letters as the monomers and words as the polymers. English has 26 letters. We combine letters to form words. According to the Oxford Living Dictionary, English has over 170,000 words (with other sources citing more).

You can see this explosion of polymer diversity by considering proteins, a class of biological polymers that make up muscle, skin, enzymes, and many other biological structures. The monomers of proteins are amino acids, of which there are twenty. Nobody knows how many proteins exist in the living world. In the human body alone there might be as many as three million distinct proteins. And while many of the proteins found in other species are the same as those found in humans, many aren’t. It’s a great example of the biological theme of unity and diversity. We’re all made of the same building blocks (unity). But the structures built from those building blocks can have practically infinite variety (diversity).

One more thought about the “monomers are letters/polymers are words” analogy. In English, the set of 170,000 words (using the low estimate) that are generated from our 26-letter alphabet is made with a few constraints. For example, it’s unusual, in English, for words to have more than three consonants in a row. There’s no parallel to that when combining monomers. Also, the average length of a word in English is about 5 letters. There are only 1435 words that are 15 letters long, and 401 words that are 17 letters long. Source: YouGoWords! In living things, monomer combinations are just getting started at that length. Hemoglobin, the oxygen-carrying protein in your red blood cells, is composed of polymer chains that are about 140 monomers long. The enzyme rubisco, the protein partly responsible for making carbon dioxide into sugars during photosynthesis, has about 500 amino acids. Source: CellBiologybytheNumbers.

In living cells, combining monomers into polymers occurs through a process called dehydration synthesis. The synthesis part of that term is straightforward: to synthesize means “to put together,” which is what’s happening when monomers become polymers. It’s called dehydration synthesis because a water molecule is removed from the monomers that are being combined. Who’s combining them? We’ll study this much more in a later module, but you should know for now that when monomers are combined into polymers, the “agents” doing the combining are biological catalysts called enzymes.

Here’s a visual representation of a dehydration synthesis reaction.

Here’s another look at a dehydration synthesis reaction.

The two reacting molecules are amino acids, the monomers of proteins that we discussed above. Just as in the cartoon version of a dehydration synthesis above, note that on the right side of the first amino acid is an —OH, and that on the left side of the second amino acid is an —H (a hydrogen atom). Both of these are colored blue to make it easy for you to find them. As these two amino acids are linked together, a water molecule (also in blue) is removed.

Note that once that bond between the two monomers is formed, it’s just as strong as any other bond within the molecule. It’s not as if the monomers are Legos that have been easily snapped together, and the polymers are just as easily snapped apart. The bond between the red-colored carbon and nitrogen in the two linked amino acids above is a full-fledged single covalent bond. The polymer, chemically speaking, is one molecule. 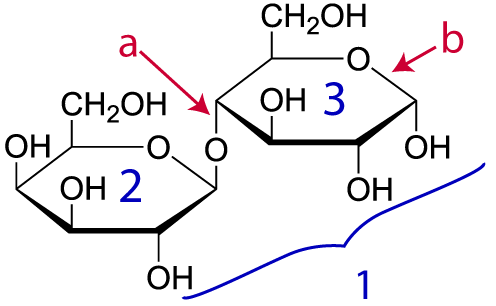 Here’s another example. Take a look at lactose (“1,” at right). Lactose is the sugar in milk. Don’t panic about how different this structural formula looks from the ones above. A convention among biochemists is to let you assume that there’s a carbon and attached hydrogen atoms at every place you see an angle vertex. So, lactose has the molecular formula C12H22O11, even though only two carbons, nine hydrogens, and ten oxygens are explicitly shown in the diagram.

Lactose is composed of two monomers: “2” is the simple sugar galactose. “3” is glucose (which we met above). Letter “a” is the bond holding these monomers together. That bond is a single covalent bond (which, you should remember, involves a shared pair of electrons: click here for a review). It’s just as strong as any other bond, such as the bond at “b.”

That having been said, while there are enzymes that attach monomers to make polymers, there are other enzymes that pull polymers apart, rendering them into their constituent monomers. When that happens, the enzymes keep the monomers’ integrity intact. In other words, there’s an enzyme (called lactase) that breaks lactose apart into the monomers galactose and glucose, and it does that by breaking the bond at “a” above. Let’s see how.

4. Hydrolysis is how polymers become monomers

The opposite of dehydration synthesis is hydrolysis. The hydro part of that term refers to water. The lysis part refers to splitting or breaking, and you’ll see lysis comes up as both a term on its own and as a part of other biology terms throughout this course. So hydrolysis means splitting with water. Enzymes pull out a monomer by “feeling” where the monomers are connected and jamming a water molecule in between them, causing the bond between the monomers to break. In cartoon form, it looks like this:

And here’s what hydrolysis looks like with structural formulas, using lactose as an example.

Let’s think about the hydrolysis that’s taking place. Over the arrow in between the monomer and the polymer, you see the word “lactase:” this is the enzyme that takes lactose and breaks it apart into galactose (the simple sugar on the left) and glucose (the simple sugar on the right). Notice that under the arrow you see H2O. That represents the water molecule that gets jammed in between the lactose monomers as the bond between them is broken. You could also write out a word equation for the hydrolysis of lactose as follows:

5. Quiz: Monomers, Polymers, and the Four Families of Biological Molecules