In the previous tutorial, we described photosynthesis as an endergonic oxidation reduction reaction that occurs in the chloroplasts of plant cells. If we view photosynthesis in the context of Earth history, however, that last part is only partially correct. From about 3.5 billion years ago until the origin of eukaryotic cells about 1.5 billion of years ago, photosynthesis was carried out by cyanobacteria. These photosynthetic bacteria (also known as blue-green bacteria) are the organisms that put oxygen into our atmosphere. A modern example of cyanobacteria is shown at left. Note that while the cells are combined into linear filaments, each cell is a completely autonomous individual: there’s no multicellularity in these prokaryotic organisms.

Through endosymbiosis, an ancient cyanobacterium took up residence inside another cell, and evolved into the chloroplasts found today. You can find chloroplasts in unicellular protists (like the Euglena the the right, which you might have observed swimming in a drop of water under a microscope), algae (like seaweed), or plants. Let’s continue by putting chloroplasts into the context where terrestrial primates like us usually find them: in leaves.

A leaf’s structure involves tradeoffs between maximizing surface area for absorption of light while minimizing water loss. To prevent water loss, a waxy cuticle (“1”) covers the upper (“2”) and lower (“5”) epidermis. The main function of the epidermis is protective, and much of the way that protection occurs is by secreting the waxy layer at “1.”

Within the leaf, most of the photosynthesis occurs in the middle, a section called the mesophyll (at “8”). The cells that make up the mesophyll are packed with chloroplasts (“3”).

Water comes into the leaf through bundles of vascular tissue (“4”), which we commonly refer to as veins. The veins also allow sugars to leave the leaf and move to other parts of the plant where they may, in a plant like a potato, get converted into polysaccharides like starch for long term energy storage.

Carbon dioxide enters the plant through pores on the lower epidermis. These pores are called stomata (“7”), and they are formed by guard cells (“6”), which can change shape to adjust the size of the stomatal opening, even to the point of closing up altogether when the plant is experiencing a lack of water. 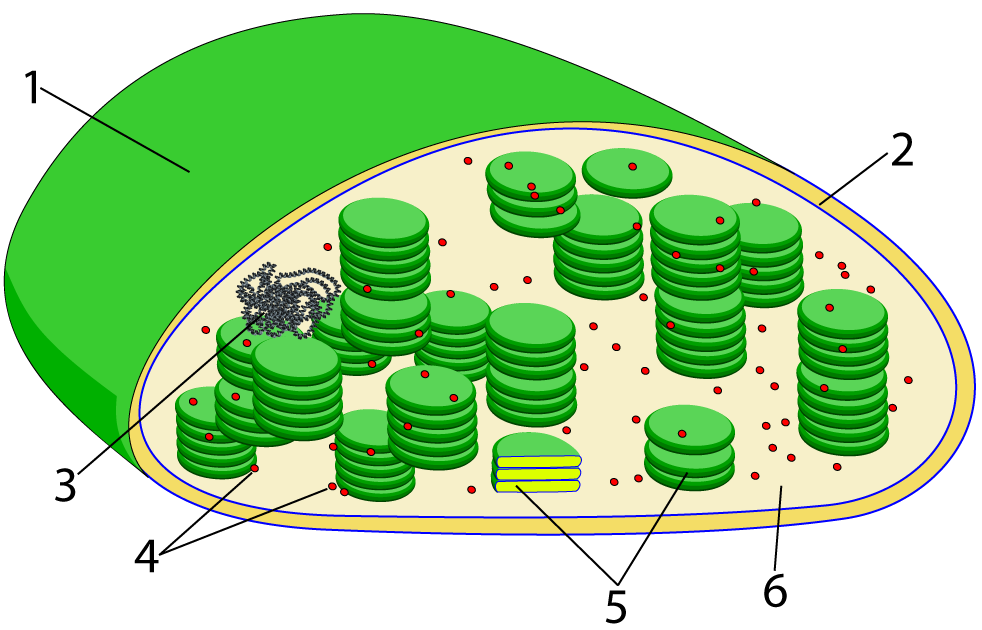 Looking at a chloroplast up close, you can see several vestiges of its bacterial origins. Like mitochondria (another endosymbiont), chloroplasts have a double membrane, a vestige of ancient endocytosis (when its cyanobacterial ancestor was engulfed by a larger cell and, for some reason, was not digested). The outer membrane, shown at “1,” is a vestige of the vesicle that belonged to the cell that engulfed the original chloroplast. The inner membrane, shown at “2,” is a vestige of the membrane of that original chloroplast. For a very brief overview of how this might have evolved, read this short description from UC Berkeley’s evolution website.

Chloroplasts, like mitochondria, have their own circular, bacteria-like chromosome (at “3”). Number 4 shows another vestige of the chloroplast’s once independent existence. These are ribosomes, which have a bacterial (as opposed to a eukaryotic) molecular structure.

Chloroplasts are filled with membrane bound sacs called thylakoids (“5”), which are organized into stacks (like a stack of pancakes). Outside of the thylakoid is a fluid called the stroma (“6”), which is analogous to the cytosol of a eukaryotic cell, or the matrix of a mitochondrion.

In the last tutorial, we looked at the overall equation for photosynthesis:

Within a chloroplast, photosynthesis occurs in two distinct phases, shown in roman numerals (“I” and “II”) in the diagrams below. Because of the complexity of the diagram, I’m providing you with both a labeled and unlabeled version of the diagram.

Phase I (“I,” in the diagram below) makes up the light reactions. Driven by light energy (“1”), water gets oxidized: it’s split apart into high energy electrons and protons (neither of which are shown below). These electrons and protons are used to reduce the oxidized electron carrier NADP+ (shown at “8”) into its reduced, high energy form, NADPH (shown at “5”). Energy harvested during the light reactions is also used to convert low energy ADP and inorganic phosphate (“9” and “10,” respectively) into high energy ATP (“4”). The waste product (but one essential for aerobic organisms like us) is oxygen, shown at “3”. All of this occurs in the thylakoid sacs, with the outputs of light reactions (NADPH and ATP) moving into the stroma to support photosynthesis’ second phase.

Phase II of photosynthesis uses the products of Phase 1 as inputs (excepting oxygen, which bubbles into the atmosphere). Phase 2 is known as the Calvin cycle, after Berkeley Biochemist Melvin Calvin, who received the Nobel Prize for his co-discovery of the cycle in 1961 (also the year Mr. W was born). Because the Calvin cycle doesn’t depend directly on light, you’ll also see it referred to as the light independent reactions, or even the dark reactions.

During the Calvin Cycle, the key external input is carbon dioxide (“6”). Using energy from ATP (“4”), and electrons and hydrogen from the energy-rich, reduced electron carrier NADPH (“5”), carbon dioxide is reduced to become the three carbon sugar glyceraldehyde phosphate, or G3P (“7”), which can be converted into glucose (C6H12O6 ) or anything else the plant needs.

5. Quiz: The Two Phases of Photosynthesis

In the next tutorials, we’ll dive into the details of the light reactions and the Calvin cycle. But let’s consolidate what we’ve learned above through the following quiz.

[f] No. Algae are eukaryotes. Prokaryotic photosynthesizers preceded them by two billion years. In the list above, what term indicates “prokaryotic?”

[f] No. Land plants, even mosses and ferns, have only been around for about 400 million years. They were preceded by photosynthetic prokaryotes by three billion years. In the list above, what term indicates “prokaryotic?”

[q dataset_id=”SMV_PSN_Two_Phases_of_PSN|716da41c2b1e4″ question_number=”2″] In the diagram below, which number shows the cells that secrete the upper waxy layer that helps prevent water loss?

[q dataset_id=”SMV_PSN_Two_Phases_of_PSN|71692145215e4″ question_number=”3″] In the diagram below, which number shows the organelle that’s performing photosynthesis?

[f] Terrific. “3” indicates the chloroplasts, the organelles that are performing photosynthesis.

[f] No. Here’s a hint. You’re looking for an organelle: something inside a cell.

[q dataset_id=”SMV_PSN_Two_Phases_of_PSN|7164792d595e4″ question_number=”4″] Photosynthesis requires carbon dioxide as an input. Which part shows where carbon dioxide would enter the leaf?

[f] Nice Job!. “7” indicates the stomata, an opening formed by guard cells through which carbon dioxide can diffuse into the leaf.

[f] No. Here’s a hint. Where is there a gap in the surface of the leaf through which carbon dioxide (a gas) could diffuse into the leaf?

[q dataset_id=”SMV_PSN_Two_Phases_of_PSN|715ff6564f9e4″ question_number=”5″] Photosynthesis requires water as an input. Which part shows where water would enter the leaf?

[f] Good work! “4” shows a vascular bundle, a vein through which water absorbed from the roots can enter the leaf.

[f] No. Here’s a hint. Water flows into your house through pipes, right? Which structure in the leaf could be a tiny, organic pipe that might deliver water to the rest of the leaf?

[f] No. Osmosis is the diffusion of water…not a likely mechanism for the origin of chloroplasts. Here’s a hint: chloroplasts are inside plant cells. What term in biology to we use for processes where things go into cells?

[f] No. Exocytosis means “out of the cell,” and it’s the name for the process during which cells use vesicles to move materials from their cytoplasm to outside their membrane. Here’s a hint: chloroplasts are inside plant cells. What term in biology to we use for processes where things go into cells?

[f] Excellent! Chloroplasts are mutualistic symbionts living inside plant (and algal) cells. That makes them endosymbionts. The process which gave rise to this partnership is called “endosymbiosis.”

[q dataset_id=”SMV_PSN_Two_Phases_of_PSN|7156cb677dde4″ question_number=”7″] The light reactions occur in which part?

[f]Awesome! “5” shows a thylakoid sacs, which is where the light reactions occur.

[f] No. Here’s a hint. Like the electron transport chain of oxidative phosphorylation (the last phase of cellular respiration), the light reactions require a lot of membrane surface in order to proceed. What part of the chloroplast might provide this surface area?

[q dataset_id=”SMV_PSN_Two_Phases_of_PSN|7152234fb5de4″ question_number=”8″] The Calvin Cycle occurs in which part of the chloroplast?

[f]Awesome! “6” shows the stroma, which is where the Calvin Cycle occurs.

[f] No. Here’s a hint. The Calvin Cycle occurs in the equivalent of the cytoplasm of the chloroplast. Which part is most akin to the cytoplasm?

[q dataset_id=”SMV_PSN_Two_Phases_of_PSN|714d7b37edde4″ question_number=”9″]One of the strongest pieces of evidence for the endosymbiotic origins of chloroplasts is the fact that they have their own DNA, which is shown at

[f]Awesome! “3” shows the chloroplast’s circular, bacteria-like chromosome. The existence of this chromosome is one piece of evidence for the idea of endosymbiosis: that chloroplasts were once free living, independent organisms that at one point, took up residence within another cell.

[f] No. Here’s a hint. The DNA is a linear molecule, and in chloroplasts (like all prokaryotes) its organized into a big loop. Which part of the diagram looks like a big loop of linear material.

[f]Awesome! Letter “b” represents the stroma.

[f] No. Here’s a hint. If a chloroplast had cytoplasm, this would be it.

[q dataset_id=”SMV_PSN_Two_Phases_of_PSN|713fcd72125e4″ question_number=”12″]If 9 is ADP, then what letter or number represents the reduced molecule that’s an output of the light reactions and an input for the Calvin cycle?

[f]Awesome! Letter “5” represents NADPH, a reduced output of the light reactions and input for the Calvin cycle.

[f] No. Here’s a hint. Electrons and hydrogen flow from water to this molecule, which has an “H” that its oxidized counterpart lacks.

[f]Terrific! Letter “2” represents water, which provides the electrons (and hydrogens) for the reductions that are a key part of photosynthesis

[f] No. Here’s a hint. It’s one of the inputs for the light reactions. Also, think about color…

[f]Terrific! Letter “3” represents oxygen, which is what’s left of water (“2”) after its electrons and protons are stripped away.

[f] No. Here’s a hint. It’s one of the outputs for the light reactions…and for photosynthesis as a whole.

[f]Terrific! Letter “6” represents carbon dioxide, which gets reduced to carbohydrate in the Calvin cycle.

[f] No. Here’s a hint. It’s one of the inputs for Calvin cycle…and for photosynthesis as a whole (meaning that it comes from outside the chloroplast).

[f]Terrific! Letter “7” represents carbohydrate. The most immediate product is the reduced, 3 carbon sugar G3P, which a plant cell can make into glucose or any other molecule it needs.

[f] No. Here’s a hint. It’s one of the outputs for the Calvin cycle…and for photosynthesis as a whole (meaning that it leaves the chloroplast). Also, it’s shaped like a sugar…

PROFESSORS: Everything you need for online teaching»

Professors:
You won't believe how much your students will learn.
Learn more.

Get a Student Subscription

Students:
Set yourself up to ace your biology class.