With the exception of a brief discussion of chronospecies in first tutorial in this module, all the speciation discussed above has involved a parent species giving rise to descendant species, a process called cladogenesis.

As shown at left, this was represented by Charles Darwin in his “Transmutation of Species Notebook,” created between 1837 and 1838. Darwin was, at that point, 29 years old, and he was in the process of figuring out how natural selection worked, and how one or more species could emerge from a parent species.

In On the Origin of Species (1859), Darwin created the image at right (the only image in that book). Living species are the ones shown at the top, in line XIV. Each successive roman numeral, according to Darwin, represents between one thousand and ten thousand generations. At generation X there would only be three surviving descendants of species A (a10, f10, and m10), with each of these three diverging into eight surviving species over the generations between X and XIV.

When one species branches into numerous descendants, it’s called adaptive radiation. Radiation, in this context, means spreading out.

In the history of evolutionary biology, one of the most famous examples of adaptive radiation involves the Galapagos finches. These birds comprise a group of 13 species (only a few of whom are shown at right). Each species is morphologically different, particularly in terms of the shape and size of its beak. Correspondingly, each species exploits a distinct ecological niche, with some birds adapted for eating large seeds, others small seeds, others insects, others cactus flowers, etc. 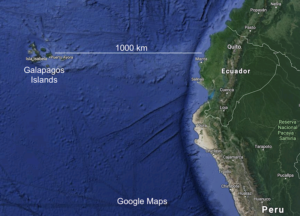 How did these finches evolve? The idea is that a small population of ancestral finches, originally from what is now Ecuador, colonized the Galapagos islands a few million years ago. Because the islands are over 1000 kilometers from the South American mainland, the trip was probably an accidental one, with the original colonists being blown over in a storm. Over the thousands of generations that followed, allopatric and sympatric mechanisms led this ancestral species to split into the current array of species (something we’ll think more about below).

On a much larger timescale, adaptive radiation looks like what’s shown at left. Based on comparative DNA analysis, the first marsupial (pouched) mammals emerged in South America as long as 100 million years ago (during the time of the dinosaurs). Over the subsequent years, marsupials diversified into a variety of orders, each of which consists of one or more families, genera, and species. Each branching of the tree, in other words, represents another instance of adaptive radiation.

Adaptive radiation is the what the diversification of life into millions of existing species (and even more extinct species) is all about. To understand how it occurs, complete the interactive exercise below.

[h]Adaptive Radiation in an Island Chain

[q]Over the course of life’s evolution, island chains have been hot spots for adaptive radiation. So, as a way of closing this module on speciation, try the following exercise. Study the diagram below. Roman numerals represent stages, Numbers are steps in the process. Letters “A” through “E” are evolving populations. Letters “w” through “z” are land masses.

See if you can tell the story of how the original ancestral species evolved into five descendants.

In stage 5, the different conditions on island “x” cause the individuals from species D to evolve into a new species, species E (step 9). Now island “x” has three species (B, C, E), island “y” has one species (D), and island Z has two species C and D. Species A continues to exist on the mainland, so where there was once one species, there are now five.