In the last module, you learned about how to mathematically analyze a population’s gene pool by using the Hardy-Weinberg equation. However, when I introduced this, I mentioned that the equation only holds true if a population is in equilibrium. In this module, we’ll look at what equilibrium means in a population genetics context, and connect this to how populations evolve.

2. The Hardy-Weinberg Principle: A Starting Definition

The idea of equilibrium within a gene pool has two dimensions. The first dimension is time. In relation to time, the Hardy-Weinberg principle states that as long as certain conditions are met, the frequencies of alleles and genotypes within a gene pool will remain constant.

Think back to the Woody Glen mouse gene pool that we analyzed in the previous tutorial in this series. We determined that the frequency of the recessive albino allele (q) was 0.7, and that the frequency of the dominant (pigmented) allele (p) was 0.3. If this population is in equilibrium, then if we returned to this population ten (or twenty or fifty) years after our initial study, then the allele frequencies should be the same.

The second dimension relates to the proportion of genotypes within the gene pool at any one moment in time. If we measure the frequency of the recessive allele, then the frequency of each of the three genotypes should correspond to the Hardy-Weinberg equation: p2 + 2pq +q2 = 1. For example, if q = 0.7 and p = 0.3, the the frequency of heterozygotes should be 42% (2pq = 2 * 0.3 * 0.7 = 0.42). If it’s not, then some condition or conditions must be acting upon the population to change these frequencies. And, in fact, one move that practicing population geneticists make when they’re studying gene pools is to measure allele frequencies, calculate the expected genotype ratios, and then statistically analyze the actual ratios against expected ratios (using, for example, the Chi square test).

Let’s take a look at the conditions that keep populations in equilibrium, and, more interestingly, the evolutionary forces that can cause gene pools to change.

3.1. The population must be large

The frequency of any allele that is not fixed is going to randomly fluctuate from generation to generation. That’s because there’s a lot of randomness that happens during sexual reproduction and the passing on of alleles from generation to generation. Think about, for example, what you know about meiosis and genetics: a heterozygote with genotype Aa can pass on an a allele in his or her gametes, or an A allele. Which one gets passed on is as random as a toss of a coin.

The takeaway: gene pools have to be large for allele frequencies to remain constant over time.

3.2. The population must be isolated 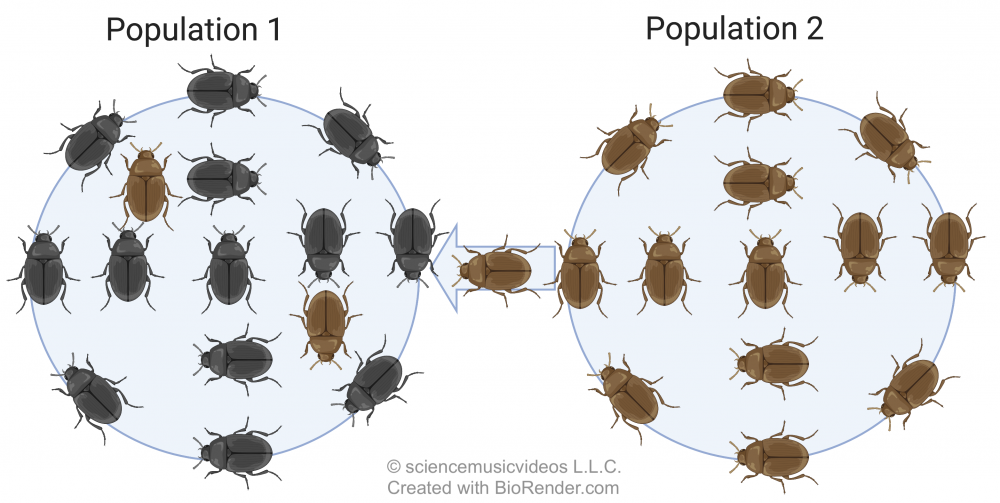 The takeaway: gene pools have to be isolated in order for allele frequencies to remain constant over time.

Mutation, whether it’s induced by mutagens in the environment or if it comes about through errors that happen during DNA replication, happens in all gene pools. In fact, mutation is a foundational process in evolution, because, ultimately, all variation traces back to mutation in DNA sequences. Because mutation is random, it has no overall effect on the frequency of alleles within a gene pool. But a requirement of the Hardy-Weinberg equilibrium model is that there must be no tendency for any allele to mutate into another allele (for example, for A to mutate into a).

The takeaway: for a gene pool to remain in equilibrium, there has to be no tendency for one allele to mutate into its partner. If p mutates into q (or vice versa), then the frequencies of p and q are obviously going to change.

For a gene pool to be in equilibrium, mating between individuals has to be random. That means that there must be no sexual selection or assortative mating.

If there is sexual selection or assortative mating, then certain phenotypes are going to be selected for (or against), and the alleles that code for these phenotypes will rise or fall in frequency.

The takeaway: for a gene pool to be at equilibrium, mating has to be random.

3.5. No harmful or beneficial alleles

The takeaway: for a gene pool to be at equilibrium, there can be no harmful or beneficial alleles.

4. Remembering the Hardy-Weinberg Principle: A Mnemonic and some Flashcards

The Hardy-Weinberg equilibrium model is a mathematical construct that we use to understand how microevolution (changes in allele frequencies in a gene pool) occurs. It’s worthwhile to commit it to memory, which you can do by remembering this silly sentence: Hard Whining Leads Isolated Mutants to Randomly Mate, preventing Harmful or Beneficial alleles.

And, with that in mind, take this quiz.

[i] The Hardy-Weinberg Principle

[q] For a population to be in Hardy-Weinberg equilibrium, it must be large and
[hangman].

[q] For a population to be in Hardy-Weinberg equilibrium, there can be no net [hangman]

[q] For a population to be in Hardy-Weinberg equilibrium, mating has to be [hangman]

[q] For a population to be at Hardy-Weinberg equilibrium, there can be no [hangman] or beneficial alleles.

[q]In a population that is in genetic equilibrium, the number of heterozygotes can be represented as [hangman]