Skip to content
Sordaria fimicola is a fungus with a lifestyle that gives us a window into meiosis and crossing over. While I have done the Sordaria lab (off and on) for many years, I don’t think that I really understood it until relatively recently (which means that I did it for about 15 years without understanding it (oh well)…Here’s what I think is going on (and why this lab can be valuable for your students). 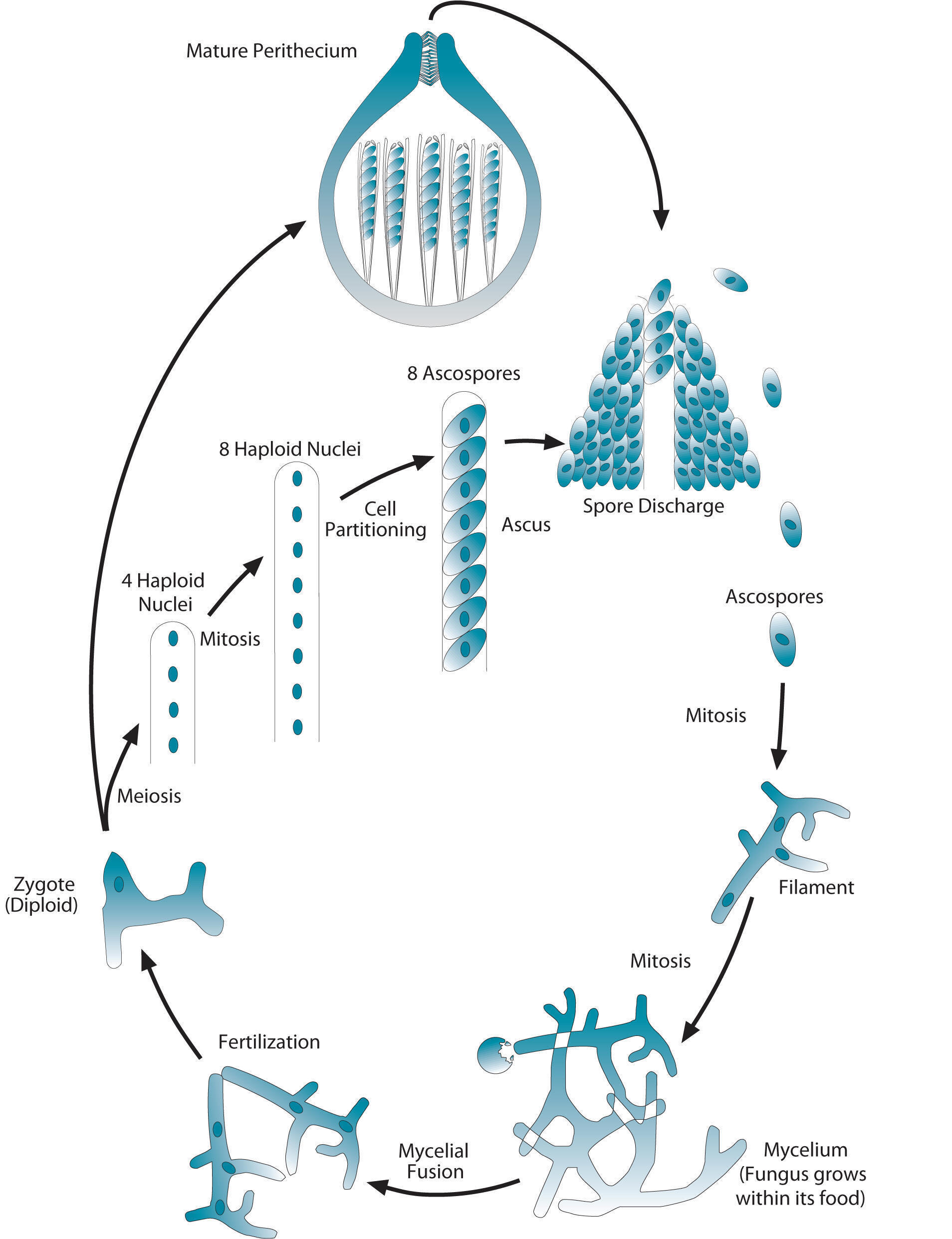 First, a bit of background.
Sordaria is a fungus. Fungi, like animals, are multicellular eukaryotes.
Unlike animals, most of a fungus consists of tiny, cellular filaments. These filaments make a network that is called mycelium. If you imagine a piece of moldy bread, covered with fuzzy growths, you get the idea of what this mycelium is like.
Another difference between animals and fungi is that that the vast majority of your cells are diploid. In a fungus, most of the mass consists of haploid cells. In the diagram shown at left, these haploid filaments are at about 4pm on the diagram, and the mycelium are at 5pm. All of these cells are all haploid.
The organism stays haploid until fertilization, which occurs at what would be about 8pm on the diagram. There, you can see a diploid zygote. The zygote then undergoes meiosis, creating four haploid nuclei.
These reproduce themselves through mitosis, creating 8 haploid nuclei. These partition into eight haploid spores, each of which is encased in a structure called an ascus. These asci (plural) are, in turn, encased within a structure called a perithecium, which can be thought of as a fruiting body: pretty much the same thing as a mushroom.

In the Sordaria lab, hybrid zygotes are created by crossing the wild type strain of Sordaria, which produce black spores, with a mutant tan variety, which produces tan spores.

Because a single gene controls spore color, we can almost literally see what happens when crossing over happens during meiosis (as well as when it doesn’t).

Here’s what happens when crossing over doesn’t occur.

You can see on the far left that within the zygote, the chromosomes that bear the spore color gene are pairing up, forming a tetrad. In this tetrad (which you have to imagine forming along the metaphase plate), the sister chromatids with the tan spore allele are on top, and those with the black allele are down below.
The result is four haploid chromosomes, two with a tan allele (again, on top) and two with the black allele (below). A round of chromosome replication doubles these chromosomes, so now we have four tan above, and four black below. Each one of these chromosomes (which is, of course, just a strand of DNA, and not tan or black in and of itself), now directs the formation of a spore. The result: four tan spores above, and four black ones below. These are then encased in an ascus, so we have this rod with eight spores.
Note that if the chromosome with the black allele had been on top and the one with the tan allele below, we would wind up with the opposite pattern: an ascus with four black spores on top, and four tan spores below. Both 4 by 4 patterns indicate the crossing over did NOT occur.
If crossing over does occur, here’s what happens at the chromosomal level:

As in the non-crossover example above, we’re going to start with our two tan allele sister chromatids above, and our two black allele sister chromatids below. But in this case, a chiasma is going to form between the adjacent black and tan chromatids, and the allele is going to swap places. So now we have, from top to bottom, a sister chromatid with a tan allele, then one with a black allele, then one with a tan allele, then one with a black allele. After meiosis 1, the chromatids separate and become full fledged chromosomes. These, in turn, are replicated, so we have eight chromosomes. From top to bottom: two with tan alleles, two with black alleles, two with tan alleles, and two with black alleles. When these chromosomes direct spore formation, we’ll have the spore color pattern shown in the ascus on the left: Two tan, two black, two tan, two black.
If you have a good visual imagination, you can probably envision how other patterns indicating crossover emerge (and since that’s a frequent assignment connected with this lab, I’m going to hold off on providing a solution for you at this time). 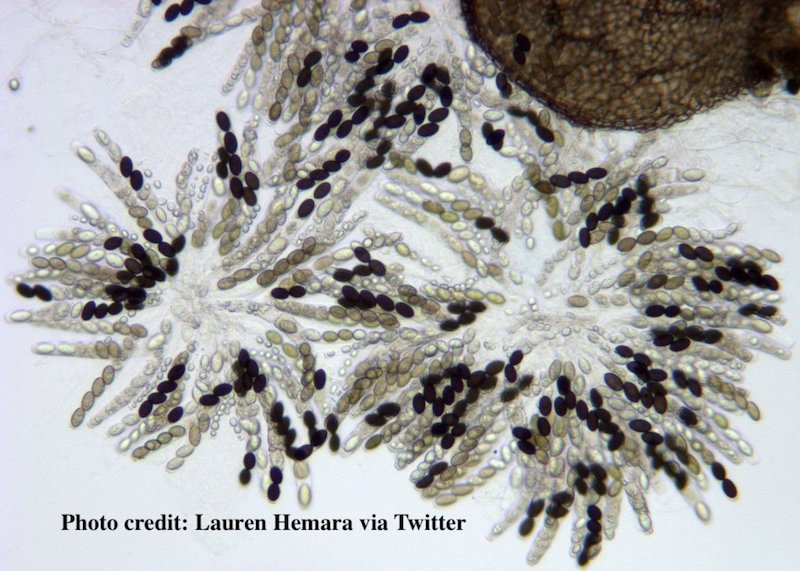 In published accounts of this lab, a typical count of all the crossover and non-crossover asci, will get you a ratio of about

The percentage of asci showing crossover divided by 2 equals the map units in this activity. This is done because each spore produced by meiosis undergoes a mitotic division (investigation 7, page 95).

This, to me, makes no sense. The mitotic division doesn’t double the frequency of asci that show the recombinant pattern. It simply doubles the number of spores. So, I’m not convinced that this makes sense.

Here’s another rationale for dividing by two. This one comes from the Biology Place’s Lab Bench, where they have a great interactive activity about Sordaria.

Why divide by two? Each crossover produces two spores like the parents and two spores that are a result of the crossover. Thus, to determine the number of crossovers, you must divide the number of asci counted by two since only half the spores in each ascus result from crossing over.

I think that this explanation, though it sounds a little better, has the same problem. We’re not counting spores. We’re counting recombinant asci.

Here, instead, is what I think is going on…

Notice that the set of four gametes on the top right is equivalent to an ascus (with the obvious difference being that the gametes don’t replicate themselves through mitosis: there are only four gametes, as opposed to eight spores). Half of the gametes are recombinant (b+ vg or b vg+, and half are parental (b vg or b+ vg+). But when these gametes (haploid eggs) are fertilized by the sperm from the doubly recessive test-cross mutant, only half of the zygotes produce recombinant phenotypes (the other half will produce parental phenotypes). In other words, to make the meaning of recombination (and how we relate this to map units) equivalent for both Sordaria and eukaryotic organisms, we have to divide our number of recombinant asci by two, so that recombination isn’t doubly over represented!

Now, that, I think, is a good rationale for dividing the number of recombinant asci by two in order to get the map units. Please let me know what you think!

Link back to Meiosis