One key idea to take away from everything that we’ve learned about meiosis so far is that meiosis reduces chromosome number from diploid to haploid.  Here’s a second idea:  meiosis, along with fertilization, creates genetic variation. That second idea is going to be the focus of this tutorial.

You can think of this variation as having two dimensions:

How does meiosis create variation? In terms of the actual, cellular processes, two things occur:

To keep this as simple as possible, we’ll use, as our example, a cell with four chromosomes. That means that the diploid number is 4. The haploid number is 2.  In what follows, 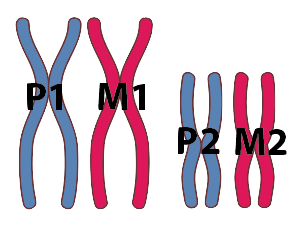 If you were to make a karyotype of a germ cell in the ovary or testes right before that cell underwent meiosis, it would look like what’s shown at left. You should notice right away that the chromosomes are doubled (consisting of two sister chromatids), a result of the chromosome duplication that occurs right at the start of meiosis, during what’s called interphase 1.

Interphase 1 is followed by prophase 1. During prophase 1, enzymes find each member of the homologous pair and pair them up. These homologous partners physically embrace one another, with maternal chromosome 1 embracing paternal chromosome 1, and so on. You can see this embrace on the right. These homologs will hold on to one another until they get pulled apart, later in the process. But the main idea, for now, is that the homologous pairs are together, and can be manipulated as a unit.

Next, spindle fibers grab the homologous pairs, and pull them to the cell equator. This moment, when homologous pairs are lined up in the middle of the germ cell, is metaphase 1. As this lining up occurs, the orientation of the paternal and maternal chromosomes is completely random. So, one way that the cell could organize its chromosomes is as shown below:

But the chromosomal arrangement in this germ cell could just have easily been this:

Notice that M1 is on the left and P1 is on the right, with P2 and M2 in the same position as in the illustration above.
When this germ cell undergoes the first cell division of meiosis, the resulting haploid daughter cells would be like this:

If you’re mathematically minded, then you might notice that you can use the FOIL method for factoring a binomial to figure out the chromosomes in the gametes. FOIL is an acronym, and it stands for first, outside, inside, and last. With two homologous pairs, P1, M1, and P2, M2, then the first of each pair is P1:P2. The outside pair is P1:M2. The inside pair is M1:P2. The last is M1, M2.

Why can’t you have combinations like M1:P1 or M2:P2? Remember that meiosis is about sending information about how to grow, develop, and interact with the environment from one generation to the next. As I discussed above, each homologous pair is like a recipe book, with recipes for enzymes, other proteins, various RNAs, and so on. Those recipes, of course, are genes. A gamete that was M1:P1 would be missing all of the recipes/genes that reside on chromosome 2, resulting in what would probably be a non-viable gamete, and almost certainly a non-viable organism.

With more than two pairs of chromosomes (and remember that we humans have 23 pairs), working out the number of possible combinations can be overwhelming. So try it with a germ cell that has three homologous pairs, as shown below:

[q]In a cell with three homologous pairs [(P1: M1), (P2: M2), (P3, M3)] how many combinations of chromosomes can result in the haploid daughter cells? You might be able to do this in your head, but you’ll learn more if you grab a piece of scrap paper and chart out all the possible combinations, first in the germ cells, and then in the haploid gametes.

In humans, with 23 homologous pairs, the number of chromosome combinations in any gamete is 223, or 8,388,608. What does that mean? It means that when your father created the sperm that gave rise to you and your siblings, there was only a 1/8,388,608 chance that the array of maternal and paternal chromosomes that he would pass on in any two sperm would be the same. And when you think about the fact that your mother was doing the same thing as she created the eggs that led to you and your siblings, the chance that you and your siblings would inherit the same array of maternal and paternal chromosomes becomes infinitesimal: 1/223 times 1/223 =1/246, which is about 1/70 trillion.

[q]The key idea behind independent assortment is that each pair of homologous chromosomes is divided up [hangman] from every other pair.

[q]During metaphase 1 (shown below) the way that maternal and paternal chromosomes line up is as [hangman] as a coin toss.

The cell below has [hangman] homologous pairs. That means that meiosis can create [hangman] possible combinations of chromosomes.

In a cell with three homologous chromosomes, meiosis can result in [hangman] possible combinations of chromosomes.

Independent assortment is just one way that meiosis creates variety. The second process involves the combining of maternal and paternal DNA into hybrid, completely novel chromosomes. This eliminates the chance that any two siblings would receive the same DNA from their parents (even in a species with one homologous pair, much less in humans, which have 23 pairs). Here’s what happens.

At the chiasma, other enzymes will cut these non-sister homologous chromatids and move them over to the matching spot on their homologous partners. You can see the result in the diagram below. If we (very stereotypically) color code the maternal chromosome as pink and the paternal one as blue, then you can see how the tip of the right chromatid in the maternal chromosome on the left now has a bit of blue paternal DNA, and the tip of the leftmost blue paternal chromatid on the right now has some pink maternal DNA.

Meiosis, in other words, creates recombinant DNA. You’ve probably learned about recombinant DNA in your studies of genetic engineering, where DNA from different species is spliced together. In meiosis, what’s being spliced together is the DNA you inherited from your mother and father. You recombine this DNA into new DNA, and then (if you choose to have offspring) you’ll pass this recombined DNA on to the next generation. The same process, of course, occurred when you were created. That means that your DNA is also new and unique. So, if your mom or dad (or other people in your life) tell you that you’re special and unique, don’t roll your eyes. It’s true: unless you’re an identical twin, the DNA in each of your cells is a never before seen sequence, a truly new thing in our universe. Of course, that doesn’t make you any more special than anyone else, because everyone else is exactly as special and unique as you are.

The quiz below covers the various ways that meiosis creates variation:

[h]Quiz: Meiosis and Variation
[i]

[q] As shown in the diagram below, the pairing up of homologous chromosomes is also known as

[q] In the diagram below, these paired homologous chromosomes can also be referred to as a

[q] In the diagram below, the arrow indicates a

[q] The tetrad shown below shows what process?

[q] The tetrad shown here illustrates the creation of

[q] This diagram shows two homologous chromosomes at the end of prophase 1. What’s the best explanation for the region of swapped color on each of the innermost chromatids?

[q] What’s the big idea behind this screenshot of metaphase 1 from ‘Meiosis!’ (Mr. W’s meiosis song)?

[q] In an organism with four chromosomes, or two homologous pairs (which is what is shown in this diagram) how many combinations of maternal and paternal chromosomes can occur in the gametes?

[q] In an organism with six chromosomes, or three homologous pairs (as shown in this diagram) how many combinations of maternal and paternal chromosomes can occur in the gametes?

[q] In an organism with 46 chromosomes, or 23 homologous pairs (as shown in this diagram) how many combinations of maternal and paternal chromosomes can occur in the gametes?

Here are the key concepts related to meiosis:

Remember that fertilization, which follows meiosis, amplifies the creation of variation by combining DNA from the two parents (a topic we’ll focus on more in later modules).

With these concepts in hand, let’s walk through the whole process. Note that you can scroll the text below the diagram to read my explanation of what’s happening.

Now let’s see how well you understand how meiosis works. To keep you on your toes, I’m switching up the diagrams.

[i]If you need to stop before finishing, you can pick up where you left off by clicking “new” on the next card.

Now that you understand how meiosis works, it’s time to look at what happens when the process unfolds differently. This leads to our next tutorial.