Cancer is a disease involving uncontrolled cell growth. In 2018, it was the second leading cause of death worldwide.

Cancer comes about when cells acquire mutations that increase their rate of replication. Instead of acting as team players that follow the rules that would make them contributing members of their body tissue or organ, cancer cells start to divide on their own.

When cells grow abnormally in their site of origin, they form an unorganized mass of cells called a tumor. If the cells in a tumor remain where they started, the tumor is considered to be benign. Benign tumors can usually be removed through surgery. Cancer occurs when the cells in a tumor acquire additional mutations that enable them to leave their site of origin, spreading tumors throughout the body. This process is called metastasis. A metastatic tumor is said to be malignant.

Once cancer has metastasized throughout the body, it’s much more difficult to treat. Click the following link to learn more about metastatic cancer and options for treating it.

Cancer cells have a variety of features that distinguish them from normal cells, six of which are illustrated below. 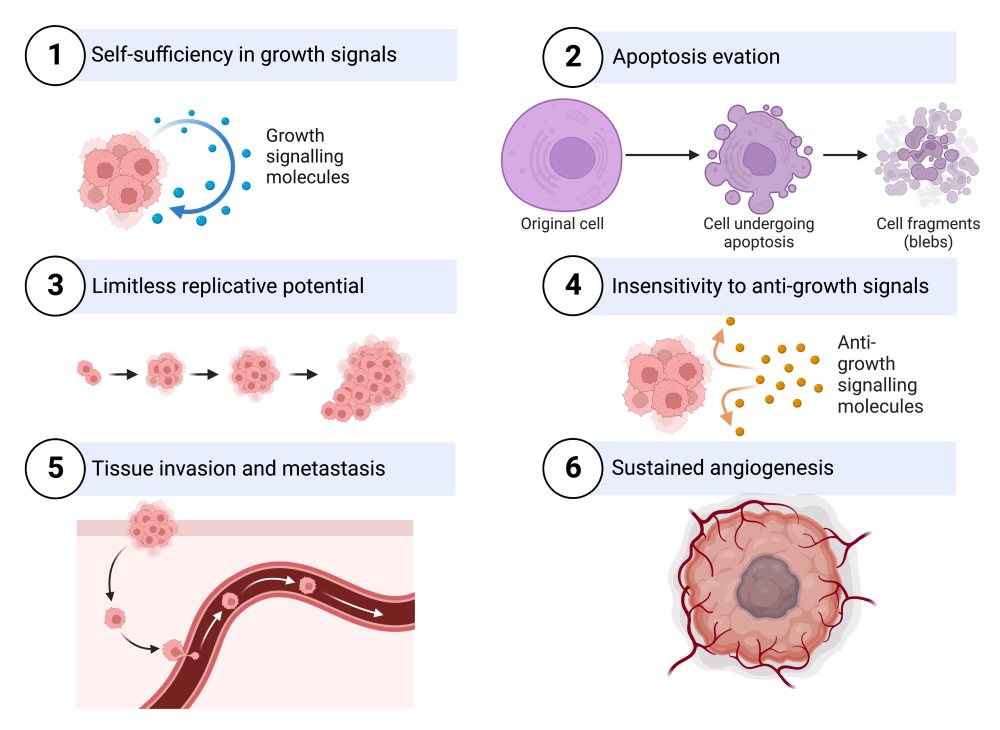 Below, we’ll learn about the kind of genetic changes that lead cells to become cancerous. But first, take the quiz below.

2. What is Cancer? Checking Understanding

[h] What is Cancer: Checking Understanding

3. Two Types of Genes are Associated with Cancer: Oncogenes and Tumor Suppressor Genes

To understand the mutations that are associated with cancer, let’s reconsider the cell cycle and its checkpoints.

As a dividing cell progresses through the cell cycle, a variety of molecules, both internal and external to the cell, either pause the cell’s progress or encourage it to move forward. 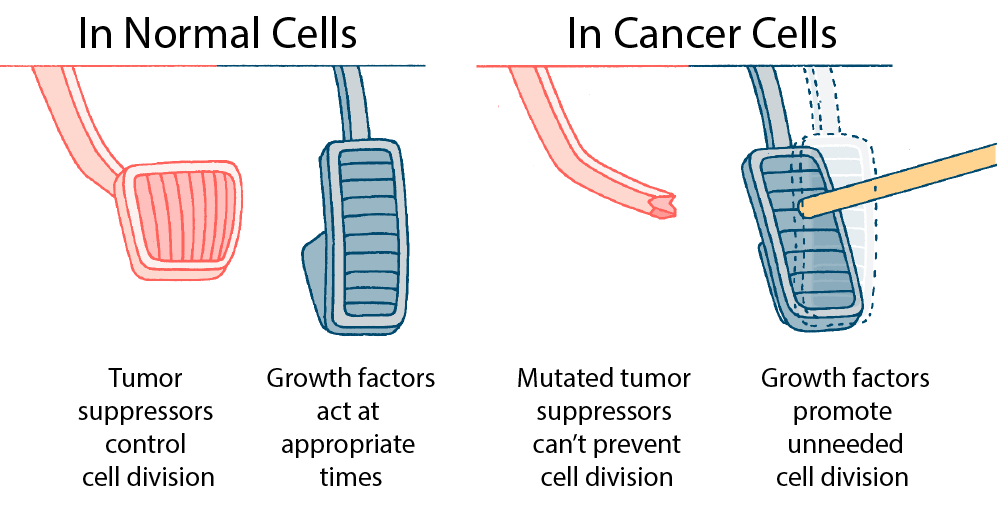 A useful and widely-used analogy is to compare a cell’s tumor suppressor genes to a car’s brake pedal, and oncogenes to a car’s accelerator (gas pedal). In a normal, noncancerous cell, a tumor suppressor protein acts as a molecular brake pedal, slowing down or pausing the cell cycle. A proto-oncogene acts like a gas pedal, enabling the cell to move forward through the cell cycle.

Following this model, cells can become cancerous in several ways:

These two ways are not mutually exclusive. It’s widely thought that cancer involves multiple mutations, which might involve both tumor suppressors and oncogenes. 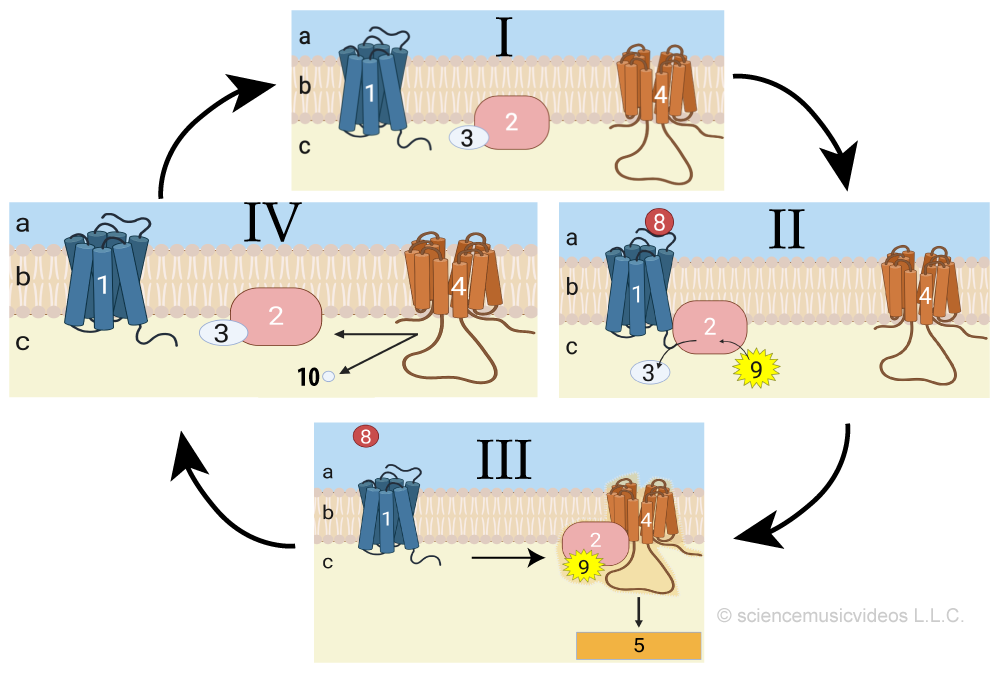 Here’s how a mutation in an oncogene could disrupt a signal transduction pathway in a way that could cause cancer.

Let’s start with a quick review of signaling systems. In diagram I on the right, the G protein (2) is inactive, bound to GDP (3). Diagram II shows how when a ligand (8) binds with a G-protein coupled receptor (1) the G protein becomes active and binds with GTP (9). That enables the G protein to bind with adenylyl cyclase (4), which converts ATP into cAMP (not shown), initiating a phosphorylation cascade (also not shown), eliciting a cellular response (5).

RAS is a gene that codes for a G protein (also called RAS). Mutations in RAS genes are associated with about a third of all human cancers, including cancers of the lungs, pancreas, and colon.

In its normal form, RAS is a proto-oncogene, and the RAS protein codes for molecules that encourage the cell to progress through the cell cycle.

Here’s how RAS functions as a non-cancer-causing proto-oncogene. When a ligand (A) binds with its receptor (B), RAS (C) binds with GTP (D). In this activated form, RAS can initiate a phosphorylation cascade (E) that ends with a transcription factor (G) entering the nucleus (F).

Transcription factors are exactly what they sound like: they bind with genes (H) and cause the DNA to be transcribed into RNA (not shown), which gets translated into a protein (I). In this case, the protein stimulates the cell cycle (J).

A mutation in RAS causes the RAS G-protein to be constitutively active. “Constitutively active” means that RAS is always in its “on” condition, bound to GTP. You can see this in the image on the left. The mutant RAS protein (K) binds to GTP (D), even though there’s no cell-division-inducing ligand bound to its receptor (J).

Because this mutant RAS is constitutively bound to GTP, it can activate the same phosphorylation cascade, leading to the transcription of its target gene. And because RAS is always “on,” the cell winds up producing too much of its target protein (L), which overstimulates the cell to divide (M).

Oncogenes can also involve the overexpression of receptors. One such receptor is HER2 (human epidermal growth factor receptor 2), which is overexpressed in about 25% of breast cancers.

“Overexpression” means that the cell produces too much of a gene product. In this case, the overexpressed gene codes for the HER2 receptor. With too many receptors, the cell becomes oversensitized to epidermal growth factor, a protein that stimulates mitosis. As a result, cells with this mutation divide when they shouldn’t, potentially leading to cancer.

The p53 gene is a tumor suppressor gene. It produces a protein that is found inside the nucleus, and which plays several roles that protect the body from cancer. These include:

p53 is so important that it’s called the “Guardian of the Genome.”

Here’s how it works

Letter “A” shows DNA damage. This could occur from an error during DNA replication or from a mutation-causing agent such as ultraviolet radiation. Through a variety of mechanisms, a cell can detect DNA damage, which initiates a signaling cascade (B). This cascade results in the activation of the p53 protein. p53, once activated, initiates transcription of a variety of genes (one of which is shown at “D”).

E shows the effects of transcription: halting the cell cycle (1), DNA repair (2), or release of signal that will cause the cell to self-destruct (3). The overall effect: preventing a cell with damaged DNA from reproducing. 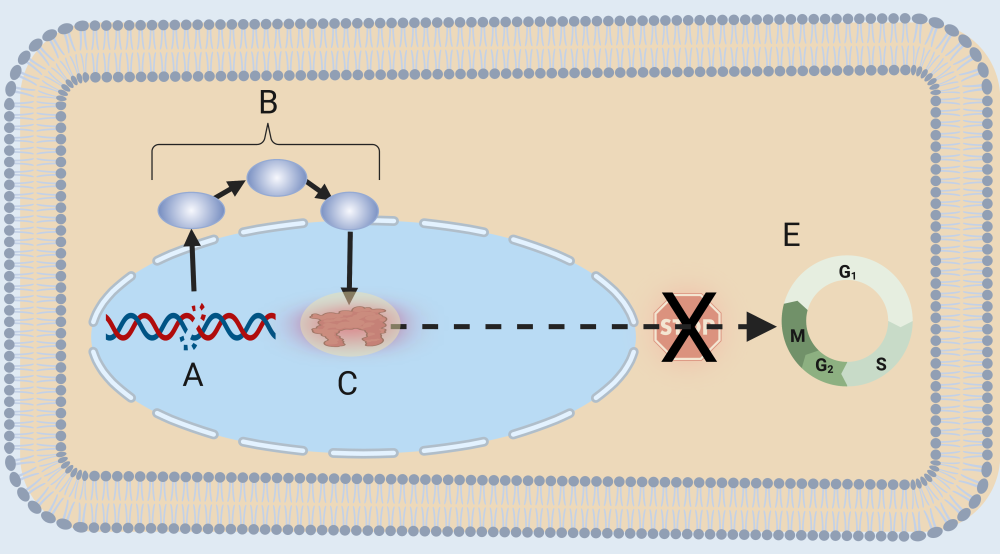 If a mutation occurs in the p53 gene, then the p53 protein (indicated by “C”) will be defective or missing. In that case, p53 will be unable to respond in a way that repairs DNA, halts the cell cycle, or destroys the cell. As a result, the cell will continue to move through the cell cycle (E) with broken or damaged DNA, increasing the chance that the cell will become cancerous.

Apoptosis is programmed cell death. It’s a key part of development because it enables an organism to remove unnecessary cells and sculpt its emerging form. The breakdown of apoptosis (as discussed several times above) is an important element in cancer.

In the diagram on the left, you can see how apoptosis (C) in a tadpole’s tail (A) leads to the removal of that structure, something which also happens to human beings during our embryonic development. In B, you can see how at one point during development, our hand is a webbed paddle. Apoptosis is how the cells between the fingers are removed, allowing for the formation of distinct digits.

Apoptosis is different from necrosis, which is a form of traumatic cell death that occurs when cells are injured. By contrast, apoptosis is highly regulated and controlled. It starts with the cell shrinking, and its nuclear material (called chromatin) condensing (shown in “b”). This is followed by DNA fragmentation and “blebbing:” protrusion of the membrane as the membrane uncouples from the cytoskeleton and the internal structure of the cell starts to disintegrate (in “c”). Finally, the cell breaks apart, becoming membrane-bound apoptotic bodies, which are consumed by cells of the immune system

Apoptosis has been extensively studied in a roundworm called C. elegans. This tiny worm (about 1 mm) is one of the most studied organisms in biological science. It’s the source of much of our understanding of how multicellular organisms develop.

C elegans, as an adult, has exactly 959 cells. In the course of the cell divisions that produce these 959 cells, there are 131 instances of apoptosis. These are initiated by external signals. Here’s how the process works.

In cell “1,” these two proteins (at “d”) are inactive. They’re inactive because of a regulatory protein called Ced-9 (indicated by the glowing star at “b”). Ced-9 is bound to the mitochondrial membrane (“a”), and its effect on Ced-4 and Ced-3 is inhibitory (indicated by the red line with the bar).

If during development, a death signal (“g”) binds with the death signal receptor (at “c”), then a signal transduction cascade (f) alters the structure of Ced-9 so that it no longer inhibits Ced-4 and Ced-3. These proteins, in turn, become activated. This results in further signaling that activates enzymes that break down nucleic acids and proteins (indicated by “i”), which results in apoptosis.

Letter “e” in diagram 2 shows the initiation of the blebbing that characterizes apoptosis.

9. A Multistep Model of Cancer

Cancer develops from just one cell. But multiple mutations over multiple generations are required for the descendants of that cell to develop into cancer.

This is known as the multi-step model of cancer. In the image on the left, “A” shows a cell that’s acquired a mutation, perhaps in a single tumor suppressor gene. A second tumor suppressor gene would remove the brakes on cell division, resulting in the growth at “B.” In steps “C” and “D” additional mutations, perhaps in the RAS gene, have increased the rate of growth. In step “E” additional mutations have enabled the cells to leave their site of origin and enter the bloodstream. In “F,” these cells are now creating new malignant tumors throughout the body.

Use the flashcards below to consolidate your understanding of cancer and apoptosis.