Click this link for a Cellular Respiration Student Learning Guide

1. Introduction: Cellular respiration is how cells take the energy in food and make it into ATP, the cell’s moment to moment energy source 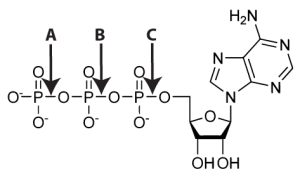 Think about how important eating is. As I pointed out in the previous tutorial (about ATP), there are two reasons why we eat. The first is to replenish our store of the molecules that make us up, which we need in order grow and repair ourselves. The second is to take the chemical bond energy in the molecules in the food we eat, and to use it to attach a phosphate group onto ADP (adenosine diphosphate), creating ATP (adenosine triphosphate). Creating ATP from ADP and phosphate is endergonic: it requires energy to drive the process forward, and that energy comes from food. Once the cell has ATP, it can use the bond energy in the bond between the second and third phosphate groups in ATP (bond “A” in the diagram to the left) to power all of life’s endergonic reactions.

The overall chemical equation for cellular respiration is:

In plain English, glucose (C6H12O6) is combined with oxygen (O2) in order to create ATP. Carbon dioxide (CO2) and water (H2O) are released as waste products.

Cells carry out this transfer of energy from food to ATP very efficiently. During cellular respiration, cells can transform the energy in one molecule of glucose into somewhere between 30 and 32 molecules of ATP (I’ll explain why there’s a range in another tutorial). This transfer of energy is about 39% efficient (according to Reference.com). That’s a lot more efficient than a car, which converts between 14 and 30% of the fuel energy you put into a car into movement(source: US Dept. of Energy). Cells, of course, have been working on this for billions of years, so human engineers (who’ve been at it for a much shorter period of time) shouldn’t feel bad.

Creating ATP is a cellular process, so let’s look at the cell parts that are involved.

In the diagram at left, “1” represents the cell exterior. In the cells of any non-photosynthetic eukaryote (such as a person, bread mold, or a paramecium), glucose and oxygen are going to come from outside the cell. Because cellular respiration consumes glucose and oxygen, there’s always a concentration gradient allowing glucose and oxygen to diffuse through the cell’s membrane (shown at “2”) into the cytoplasm (at “3”). As we’ve learned in our studies of membrane transport, the cell has special protein channels for glucose, a polar molecule, while oxygen can diffuse directly through the membrane’s phospholipid bilayer.

In eukaryotic cells, the organelle that does the lion’s share of the work of cellular respiration is the mitochondrion (shown at “4”). I’ve included only one mitochondrion in this drawing, but the cells in your body can have thousands (note, by the way, that mitochondrion is the singular form of mitochondria, which is plural). Mitochondria evolved from a once-independent bacterial ancestor that, about two billion years ago, took up residence inside another prokaryotic cell, creating the eukaryotic lineage that we animals (along with the fungi, protists, and plants) are a part of. If you’re interested in the origins of mitochondria, you can read more about it in this article in Nature, or in this articlefrom the National Center for Biotechnology Information. Both of them will be challenging. Go for it!

Mitochondria have a double membrane. The inner one is shown at “6,” and the outer one at “8.” In between the two is the intermembrane space, shown at “7.”

As we’ll see in this tutorial and ones that follow, there are only two ways that cells make ATP:

The first is called substrate-level phosphorylation. This term tells you exactly what it’s about. In the diagram at left, you can see an enzyme (1) transfer a phosphate from some organic substrate (2) to ADP (3), creating ATP (5). “Substrate-level” means that the process is catalyzed by an enzyme, working on a substrate that’s losing its phosphate group, and passing that phosphate to a second substrate, ADP. “Phosphorylation” means that ADP is gaining a phosphate, becoming ATP. And, just in case you were worried about  what “4” is, it’s one of the two products of this reaction (the other one being ATP).

But first, let’s make sure you’re getting the key points of this section, and the one above.

[q]Which number is the cell membrane?

[q]Which number is the cytoplasm?

[q]Which number is the mitochondrion?

[q]Which number is the mitochondrial matrix?

[q]Which number is the intermembrane space?

[q]Which number is the outside of the cell?

[q]Which numbered part of the image is the enzyme?

[q]Which numbered part of the image is the source of the phosphate that will convert ADP to ATP?

[q]Which numbered part of the image is ADP?

[q]Which numbered part of the image is ATP?

[q]This substrate level phosphorylation has two products. ATP is one. Which number indicates the other one?

[q]In this substrate level phosphorylation, there are two substrates. Which number represents the substrate that is not ADP?

4. Oxidation and reduction reactions are how most ATP is made during cellular respiration

As you read above, substrate level phosphorylations account for only a small amount of the ATP generated during cellular respiration (about an eighth of the ATP produced). Much more ATP is produced by oxidizing glucose, and using the energy harvested from that oxidation to set up the conditions to generate ATP from ADP and phosphate. So what is oxidation?

Here’s the equation for what happens when methane, CH4 (commonly called “natural gas”) is burned:

Methane, an energy rich fuel, is oxidized. The result is energy (heat and light), along with carbon dioxide and water (two exhaust products)

From a biology student’s perspective, it’s useful to roughly equate oxidation with release of energy, and reduction with gain of energy. In other words, when a fuel like methane is oxidized, it releases energy. Oxidized substances (like carbon dioxide) don’t have free energy for accomplishing cellular work. That’s why carbon dioxide is an exhaust product. Think of this oxidized compound as being exhausted: unable to do work. By contrast, substances that are reduced (like methane) have available free energy can be harvested in order to do work.

What are some other examples of reduced substances?

Note that foods are all reduced substances. They’re full of high energy electrons that we can use to power the work that we organisms need to stay alive, to grow, and to reproduce. When cells need energy, they take a reduced fuel (which means foods like glucose) and oxidize it. The result, just like in the combustion of methane shown above, is release of energy, and production of the waste products carbon dioxide and water. Here, once again, is the overall chemical equation for the oxidation of glucose that happens in your cells.

[h]Flashcards: The equation for cellular respiration

[a] glucose+ oxygen –>? ATP+ carbon dioxide+ water (these three in any order)

[a]The goal of cellular respiration is production of ATP.

[a]An important molecule used as a fuel in cellular respiration is glucose.

[a]One of the waste products of cellular respiration is a gas that contains a carbon atom. This gas is carbon dioxide.

[a]One of the waste products of cellular respiration contains a hydrogen atom. This substance is water.

5. The oxidations and reductions in cellular respiration involve electron carriers

When glucose (or other foods) get oxidized to create ATP, the oxidation happens in many small steps. During these steps, glucose and the intermediate products that it gets broken down into it as it slowly gets transformed into carbon dioxide and water get oxidized. As this oxidation occurs, electrons and hydrogen atoms get transferred to two mobile electron carriers: NAD+, and FAD. When NAD+ and FAD accept these electrons, they become reduced. NAD+ becomes NADH. FAD becomes FADH2.

It’s useful to think of NADH and FADH2 as charged up, rechargeable batteries. When you place a charged battery into a device like a radio, the battery can create an electrical current. An electrical current is a flow of electrons that can be used to do some work (like taking a radio signal, amplifying it, and converting it into sound). NADH and FADH2 do a similar thing. They carry electron energy from either the cytoplasm or the mitochondrial matrix, and bring it to the inner mitochondrial membrane. Once there, they release their electrons to a series of membrane-embedded electron carriers called the electron transport chain. The electron transport chain uses this electron energy to create ATP.

Just think of it this way: If cellular respiration were a game of football and energetic electrons were the ball, then the end zone would be the inner membrane of the mitochondria, where the electron transport chain is found. NADH and FADH2 are like fullbacks: they carry the ball (the electrons) to the end zone.

We’ll learn the astounding details of how this ATP is generated in a later tutorial, but for now, study this diagram. 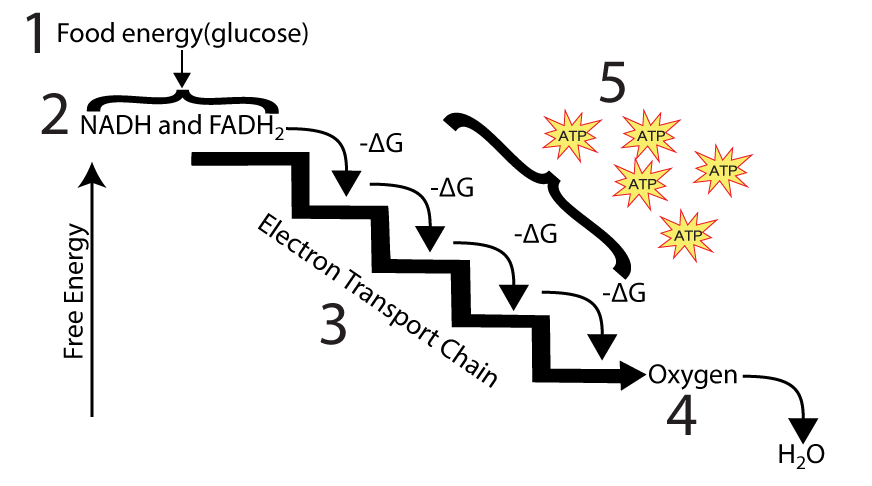 “1” represents the source of all the energy: food. A series of oxidations take the energy in glucose and transfer it to NADH and FADH2 (shown at “2”). NADH and FADH2 are mobile electron carriers: they carry bring these energetic electrons from the cell’s cytoplasm or the mitochondrial matrix to the electron transport chain, which located in the inner membrane of the mitochondria. There, the proteins that make up the electron transport chain use the energy in these electrons to synthesize ATP. At the end of the process, these electrons flow to oxygen, the final acceptor in the chain.

Let’s take stock of what we’ve covered so far

Before exploring each phase of cellular respiration in more detail, let’s consolidate our understanding with the following quiz.

[q]Which phase is the link reaction?

[q]Which phase of cellular respiration is the electron transport chain?

[q]Which phase of cellular respiration occurs in the cytoplasm?

[q]Glycolysis occurs in which area of the cell?

[q]Where does the Krebs cycle occur?

[q]Which of the molecules below can be made by substrate level phosphorylation?

[q]Which process below occurs in the inner mitochondrial membrane?

[q]When a cell needs to release a small amount of energy to do some work, it removes a phosphate from ATP by breaking the bond at ____ and attaching the phosphate to something else.

[q]Which phase of cellular respiration is the Krebs cycle?

Professors:
You won't believe how much your students will learn.
Click to learn more.

Students:
Set yourself up to ace your biology class.
Click to learn more.

Get a Free-Trial Student Subscription