1. How Fossils are formed

When an organism dies, most or all of the matter making up its body gets decomposed, leaving no trace. However, if the organism dies in an area where sedimentary rocks are forming, some or all of its body can become fossilized.

Sedimentary rocks form as deposited material (sediments) brought by gravity, wind, rivers, or ocean currents accumulate in layers, usually in a body of water, as shown at left.

A fossil is “a remnant, impression, or trace of an organism of past geologic ages that has been preserved in the earth’s crust.” (Merriam Webster). In the example at right, death (1) is followed by burial in sediments (2). Burial keeps the skeleton from being dismembered by scavengers or broken apart by currents. Over time, minerals in the water replace the organic material in the organism’s bones (3), creating a fossil.

Layers of sedimentary rock are called strata. In the field, sedimentary strata (when exposed on land), look like this:

Fossils can also be formed as molds or casts of an organism’s body. This can happen as a shell, bone, or other hard part of the organism presses into soft sediments, which then solidify, creating an impression.

A paradox about the fossil record is that it’s simultaneously vast and incomplete. According to an article in the Proceedings of the National Academy of Sciences, “About 192,000 invertebrate fossil species were known in 1970, and at least 3,000 more are named every year.” Based on this reckoning, the number of known fossil species in 2020 would be over 300,000. That’s a lot of fossils. But since the number of species that have ever lived might be as high as 5 billion, the fossil record represents much less than 1/10,000 of one percent of all life.

2. Knowing the Age of a Fossil

The term “radiometric” combines the words “radiation” with “meter,” and it’s a method of dating specimens by measuring the rate of disintegration of radioactive elements within nearby rocks. Another name for this type of dating is absolute dating. Here’s how it works.

When volcanic rock cools, the atoms within it are locked in place: it’s a closed system. Some of the elements of the atoms within that rock will have radioactive isotopes. These are atoms of an element that have an unstable nucleus. That means that the nucleus will emit subatomic particles. Loss of some of these particles will change that atom’s number of protons, changing that atom into a different isotope of a different element.

The loss of particles from radioactivity is called radioactive decay, and it occurs at a predictable rate. That rate is known as the half-life, and it’s the time it takes for half of a sample of a radioactive isotope of an element to transform itself into some other form. 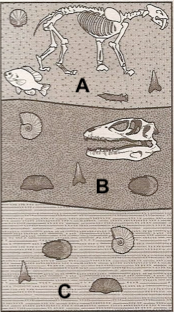 To date a fossil, radioactive dating has to be combined with another geological phenomenon called superposition. Because of the way sediments are laid down, sedimentary rock layers that are closer to the surface are assumed to be younger, while those lower down are assumed to be older. For example, if you were digging through sedimentary layers and found a sequence of fossils like the one shown at left, you could assume that A is the youngest and C is the oldest. Using superposition enables you to determine the relative age of a fossil; in other words, that it’s older than fossils in strata that are higher up, and younger than fossils in strata that are lower down. This is called relative dating.

3. The Fossil Record as Evidence for Evolution

We started this module on evidence for evolution by looking at the claims made by the theory of evolution.

In almost all cases, the organic material in a fossilized specimen is lost. That means that genetic changes within a lineage can’t be traced. However, fossils provide several pieces of evidence supporting the idea of descent with modification.

Second, the type of change found in the fossil record is the kind that evolutionary theory predicts. The evolutionary biologist J.B.S. Haldane famously joked that one fossil find could disprove the idea of evolution. What would that be? Finding a fossilized rabbit in pre-Cambrian rocks (rocks older than 600 million years old). That’s because evolutionary theory requires that simple life forms precede more complex life forms. Fish have to come before tetrapods (four limbed vertebrates) because tetrapods are elaborations on a fish theme. Amphibians have to come before mammals (because the more complex mammalian structures are an elaboration on tetrapod themes first shown by amphibians).

Note that this trend toward complexity is only seen in life’s grandest scale. Within any particular lineage, evolution can go in any direction, including toward simplification.

Here’s a reconstruction of a series of mammalian fossils in the whale lineage. The lineage shows transitions that include a reduction of hind legs, movement of nostrils to the top of the head, and modifications of the skull that made sonar and echolocation possible.

Much of the unearthing of proto-whale skeletons has been done by Philip D. Gingerich at the University of Michigan, and you can read his summary of some of the findings here. To learn more, you can read related articles at Smithsonian Magazine, at Wikipedia , or at the NY Times

Birds are a branch of the dinosaurs. As difficult as this might be to fathom, the robin in your front yard is a dinosaur whose ancestors survived the Cretaceous extinction that killed off the rest of the dinosaurs. That’s true of that hawk soaring overhead, and the pigeons downtown.

And here’s a reconstruction. Note the claws on the wings.

3c. Tiktaalik and the transition from fish to tetrapods

Tiktaalik is an animal that’s transitional between lobe-finned fish and the first tetrapods (vertebrate animals with four limbs). Lobe-finned fish have fins with stout bones, unlike the more slender rays found in the fins of fish like salmon, tuna, guppies, or goldfish. Tetrapods are the four limbed vertebrates that walked on land. The group includes the amphibians, reptiles, birds, and mammals.

The images above show fossilized remains of Tiktaalik’s snout and upper body (left) and its forelimb. Below is a reconstruction showing what Tiktaalik might have looked like.

Tiktaalik, whose fossils were unearthed in Northern Canada in 2004, lived during the late Devonian period, about 375 million years ago. Tiktaalik’s features link the lobe-finned fish to their tetrapod descendants. Tiktaalik had the scales and gills that all fish have. But its fin bones, attached by large muscles to well-developed shoulder bones, suggest that this animal could have supported its weight. It also had holes above its eyes (spiracles) that indicate that it had lungs in addition to gills. Its long snout and teeth suggest that it could raise its head just above the water line (like a crocodile) as it scanned for prey in tidal waters.

To learn more about Tiktaalik, you can read this brief article in National Geographic, or  this much more detailed article in Nature from its three discoverers, Neil Shubin, Ed Daeschler, and Farish Jenkens.

[h]Fossils as Evidence for Evolution

[q multiple_choice=”true”] Fossils form in which of the following rock types?

[q] The type of rock in which this fossil is found is a  [hangman] rock.

[q] A remnant or impression of an organism that has been preserved in the earth’s crust is known as a [hangman] .

[q] Here’s how radioactive dating works: When igneous  rocks (the kind from [hangman] are formed, [hangman] atoms within the rock are trapped inside the rock Subsequently, these elements [hangman]at a predictable rate, and this decay can be used to date the age of the rock.

[q] The type of rock shown in this cartoon is a  [hangman] rock, and the layers within are known as [hangman].

[q] The idea that deeper sedimentary strata formed before the strata closer to the surface is called [hangman].

[q] In radiometric dating, the time it takes for half of a sample of a radioactive isotope to transform itself into some other form is called the [hangman]-[hangman]

[q] The fossil record shows that [hangman] has changed over [hangman].

[q] [hangman] fossils have features that are common to both an ancestral species, and its [hangman].

[q] Transitional fossils such as Tiktaalik validate the evolutionary idea of [hangman] with [hangman].

[q] Archaeopteryx shows features found in both dinosaurs and [hangman]. That makes it a [hangman] fossil.

[q]Isotope M has a half life of 1000 years, during which it decays into isotope N. You’re studying a sample of material that has a relative proportion of 25% M and 75% N. How old is this material?