Click the following link for a Carbon and Functional Groups Student Learning Guide to accompany this tutorial.

1. Why the molecules of life are built around carbon 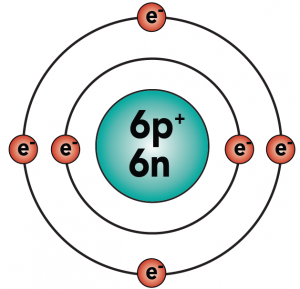 Life is complex. Carbon allows for that complexity at the molecular level. Here’s why.

Carbon is element number six in the periodic table. It’s number six because it has six protons, along with six neutrons and six electrons.

With four outer (also known as valence) electrons, carbon readily forms covalent bonds with other atoms, including other carbon atoms.

Below, you can see carbon covalently bonded to four hydrogen atoms to form methane, CH4. Methane is natural gas, an important fuel, and a significant part in the human-caused atmospheric changes that are causing climate disruption. Study the two representations of methane below. Remember that the dash between the C and the H represents a shared pair of electrons.
And here’s ethane, C2H6. Note that one carbon is sharing electrons with a second carbon.

That carbon-carbon sharing makes it possible for carbon to form chains, rings, and branched molecules.

This complexity and variety is further enhanced by carbon’s ability to form double bonds and triple bonds, as shown below…

So why is this important? The ability of carbon to form bonds with other atoms, particularly with itself, sets the stage for the evolution of the complex molecules that make life possible. Living things do phenomenally complex things, like taking in matter and energy from the environment to grow and develop, and reproducing and passing on their genes to the next generation. On the molecular level, a variety of “molecular machines” are required to carry out these tasks, and these machines are big molecules, built around a carbon backbone. The flexibility of carbon-based molecules allows for the complexity of life. In the next tutorial we’ll start seeing how the molecules of life are constructed. But before that, let’s check to make sure that you’re clear on what’s above, as well as on the previous page of this tutorial

2. Checking Understanding: Carbon and the Molecules of Life

[h]Carbon and the Molecules of Life

[f]No. But you can figure it out by examining this diagram.

[f]No. But you can figure it out by examining this diagram.

[q]In ethane, is the bond connecting the two carbons a single bond or a double bond?

[f]Correct. The bond between the two carbons (and between the carbons and the hydrogens) is a single bond, involving a single shared pair of electrons.

[f]No. When atoms share a single pair of electrons, it’s a single bond.

[q]Because carbon has four outer electrons, it can be organized into a variety of forms. Label these forms in the table below.

PROFESSORS: Everything you need for online teaching»

Professors:
You won't believe how much your students will learn.
Learn more.

Get a Student Subscription

Students:
Set yourself up to ace your biology class.