Looking for a student learning guide? It’s linked in the main menu for your course. Use the “Courses” menu above.

I’ll explain this through nine principles (five of which are on this page). Let’s go.

2. Principle # 1: (Almost) All Cells in an Organism are Genomically Equivalent

Biologists’ ability to clone animals through somatic cell nuclear transfer is proof of this principle. Sir John Gurdon, the recipient of the 2012 Nobel Prize for Physiology or Medicine, carried out the experiment shown at left in the late 1950s. He extracted an intestinal cell (2) from a tadpole (1) and then extracted the nucleus from that intestinal cell (3). He separately took a frog egg cell (4) and removed its nucleus (5) creating an enucleated egg (6). Note that this egg cell has no genetic material. Gurdon then placed the intestinal cell’s nucleus into the enucleated frog egg cell (shown at 7). This egg cell was able to develop into a new tadpole:  a genetic clone of tadpole number 1.

In 1996, Sir Ian Wilmut successfully cloned a mammal. To dramatize the outcome, he worked with two distinct breeds of sheep: a Finn Dorset (at “a”) and a Scottish Blackface (“e”). The process involved

What’s the takeaway from reproductive cloning? It’s that all cells have the genetic information to create an entire organism. Why then, are cells of different tissue types so different?

In the diagram above, what caused the neuron precursor cell to start activating neuron-specific genes? At some point during development, that cell responded to signals (from within or without) that set it on a particular developmental pathway. The initiation of that pathway is called determination. Determination is a series of internal changes that might be phenotypically invisible, But in most cases, it’s a decision that once made, can’t be unmade.

Both determination and differentiation are about which genes get transcribed, and in which order. This can be seen in the development of muscle cells, as shown below. 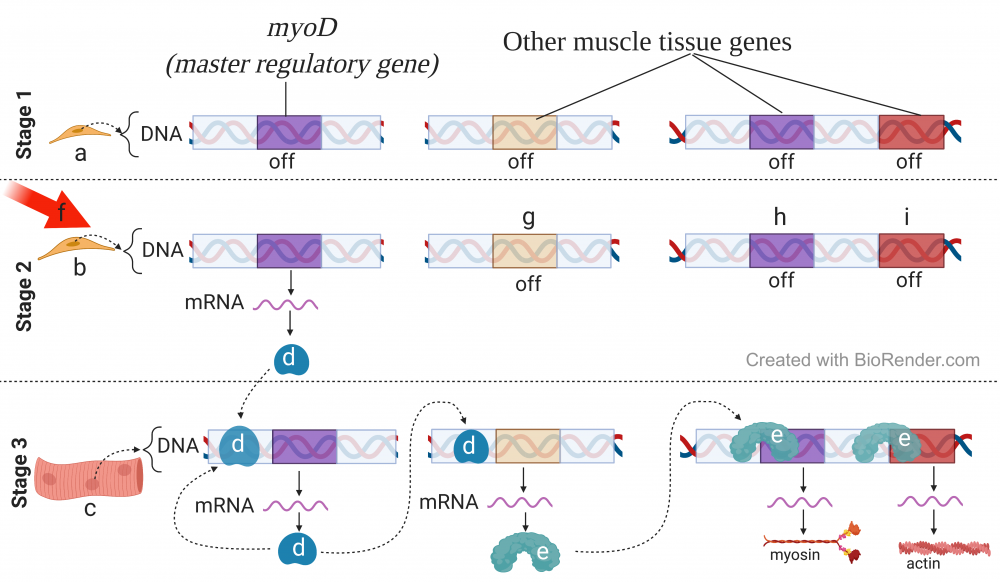 Muscle development is controlled by a group of transcription factors, one of the most important of which is MyoD. The first row of the diagram, labeled “Stage 1,”  represents a cell that’s in the earliest stage of embryonic development. Looking at the representation of the DNA of this cell, you can see that the myoD gene is off (middle column) as are other muscle-tissue-specific genes (right column). The cell at stage 1, therefore, is both undetermined and undifferentiated. You can think of this cell as a mesodermal cell that might become bone, kidney, connective tissue, blood, or any other mesoderm-derived tissue. It won’t “know” its fate until it receives a signal.

That signal is indicated by the arrow that’s labeled “f.” This signal would be some signaling molecule. In response, the cell would start to transcribe the myoD gene into RNA, which would then be translated into the myoD protein (at “d”). At this point, the cell is determined, but not differentiated. While myoD is “on,” the muscle-specific genes at “g,” “h,” and “i” are still “off.”

In stage three, you can see myoD doing two things. It feeds back upon itself, increasing the amount of myoD transcription and translation. It also acts as a transcription factor for other muscle-related proteins (“g”, labeled in stage 2). Gene “g,” in turn, codes for a transcription factor (“e”) that promotes the transcription of genes  “h,” and “i”, which are now producing the muscle-specific proteins that cause the cell to become a fully differentiated muscle cell, part of which is shown at “c.”

As is illustrated in the diagram below, cellular differentiation often results in cells exiting the cell cycle. 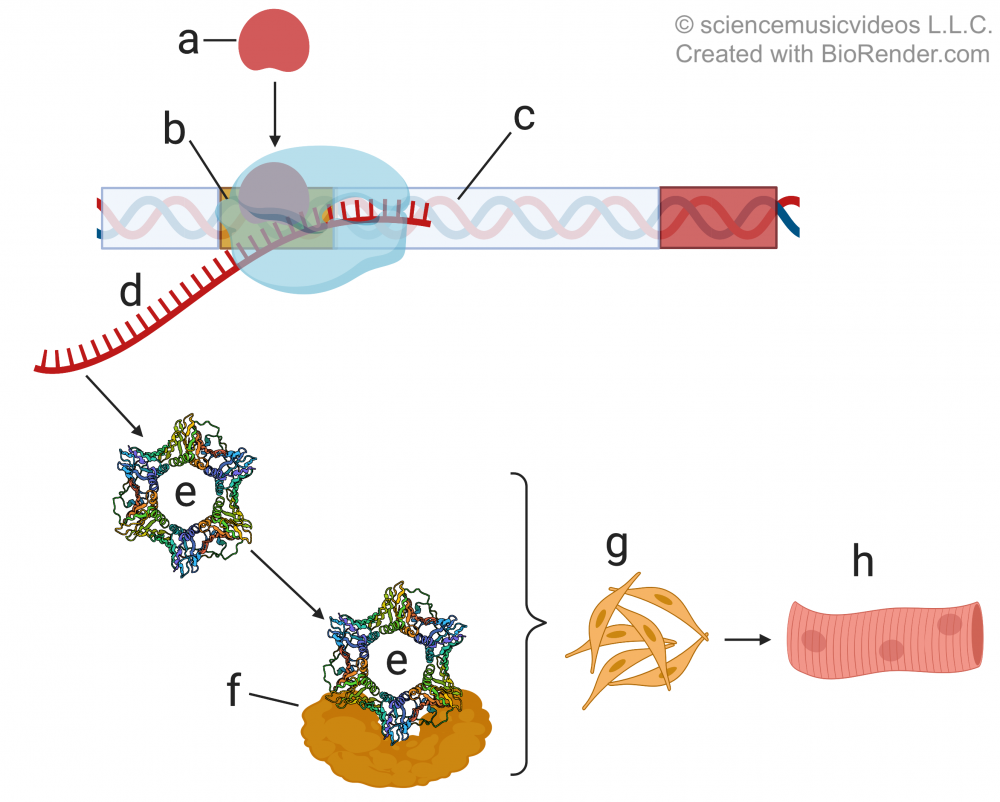 In the case of muscle tissue, myoD (“a”) acts as a transcription factor for a gene called p21 (at “c”). The p21 gene codes for the p21 protein (“e”). P21 inhibits cyclin-dependent kinase (“f”). Without cyclin-dependent kinase (CdK, shown in the cell cycle diagram below), cells can’t form MPF (“maturation” or “m-phase” promoting factor), causing cells to leave the cell cycle. Click the following link for a review of cell cycle regulation. 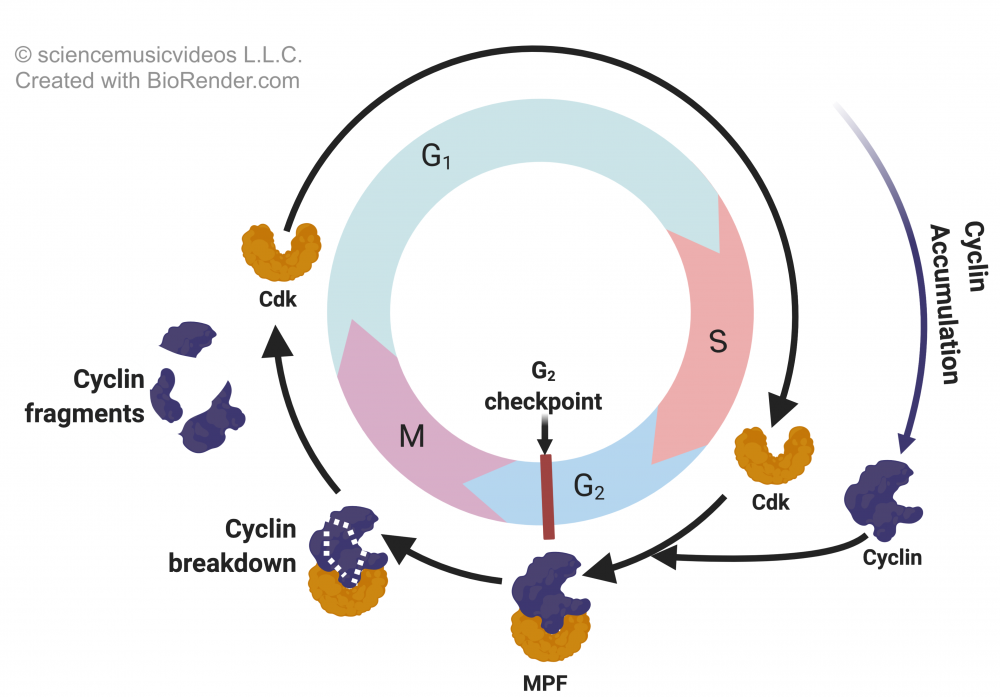 [q] All cells are [hangman]equivalent.  x

[q] In this depiction, the genetic material of the organism John Gurdon wanted to be cloned is indicated by

[q] In this depiction, an enucleated egg is indicated by

[q] In terms of development, the key idea of the diagram below is that even a differentiated cell (like the one at “2”) has the [hangman] information to make an entirely new organism.
x

[q] In the diagram below, a cloned embryo is shown at

[q] In the diagram below, the surrogate mother is at

[q multiple_choice=”true”] In the neuron and the epithelial cell shown at number 5 below, which of the following would be the same?

[q] In the diagram below, which letter represents differentiation?

[q multiple_choice=”true”] In the diagram below, which cell is determined, but not differentiated?

[q] In the diagram below, which letter represents the transcription factor that’s going to result in proteins that make this muscle cell a differentiated cell?

[q multiple_choice=”true”]The diagram below is showing myoD (at “a”) coding for a protein that’s an inhibitor of cyclin-dependent kinase (f), a molecule that’s essential for cell division. MyoD also promotes muscle cell precursors to differentiate into fully differentiated muscle cells. What key principle of development does this diagram represent?

6. Principle # 4: Initial Determination and Differentiation is caused by the cytoplasmic heterogeneity of the egg

Determination and differentiation start early in the life of the organism— often in the very first cleavage divisions that follow fertilization. What causes the daughter cells to differentiate has to do with differences in the concentration of molecules in the cytoplasm that they receive from their parent. In the diagram on the left, you can see this represented by the distribution of the molecules represented by the green triangle and the brown sphere (at “e”), with more of the green triangle on the right side of the egg, and more of the brown sphere on the left side. This uneven distribution is maintained after fertilization (“d”). As a result, when the zygote (“f”) divides (“g”), the result is two daughter cells with different concentrations of these molecules in their cytoplasm. If these molecules are proteins or RNAs that interact with the DNA in the daughter cells, they’re called cytoplasmic determinants, and the result will be the activation of different genes, creating the stage for determination and differentiation to ensue as the daughter cells continue to divide.

In the fruit fly Drosophila, one such cytoplasmic determinant is a type of mRNA named bicoid, which affects the developing embryo’s development of an anterior-posterior (head to rear) axis. Learn about this by completing the interactive reading below.

[q]
Drosophila eggs (“d”), develop within a follicle (the entire structure shown at right), which is composed of follicle cells (at “c”). At one end of the follicle are nurse cells  (“a”). The nurse cells produce bicoid mRNA (“b”), which diffuses into the egg, and winds up being much more concentrated on one end of the egg cell than the other. Note that all of the cells except for “d” are diploid, maternal cells.

[q] During development, the bicoid mRNA is translated into bicoid protein. The image below shows a gradient of bicoid protein in an early drosophila embryo. The dark spots in the drawing show how the bicoid protein is concentrated in the anterior (head) end of the developing embryo. The graph below the image quantifies this gradient in wild-type flies (see the blue line labeled “wild type”), and also in flies with mutant mothers that don’t express the bicoid gene (red line).

[q] Try to guess what the results are of the bicoid mutation. Write down your guess in your student learning guide (or wherever you’re taking notes)

[x]So, cytoplasmic gradients set up initial determination and differentiation. Read below to see what happens next. 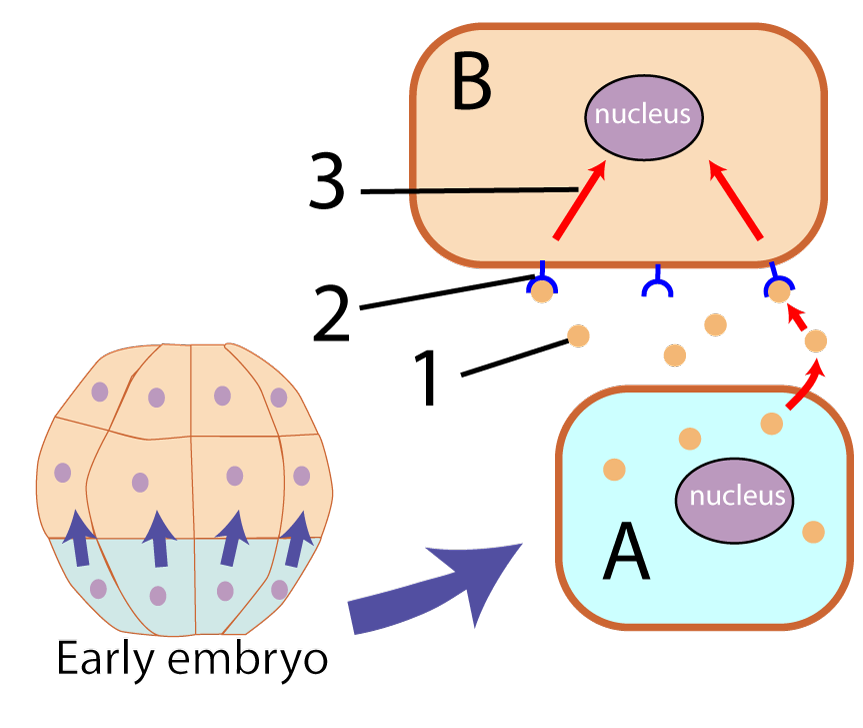 Induction involves one cell (or a group of cells) influencing the development of other cells. The inducing cells do this through the release of molecules that act as transcription factors. Such molecules, because they impact the subsequent form of the developing embryo, are often referred to as morphogens.

In the diagram at left, the inducing cells are the ones shaded blue-green at the bottom of the developing embryo. These cells (one of which is shown at “A”), release morphogens (“1”) that bind with membrane receptors (“2”) on another cell (“B”). When the morphogenetic signal binds with the receptor, it sets off a signal transduction cascade that ultimately reaches the nucleus, activating (or deactivating) genes.

Read about an experiment from the 1920s that demonstrates how induction works.

[q]Graduate student Hilde Mangold, working with her advisor Otto Spemann, surgically removed a piece of tissue from an early embryo of a donor newt  (on the left). This piece of tissue is called the dorsal lip of the blastopore. They transplanted this bit of tissue onto a second newt (the host, on the right) which now had two dorsal lips instead of one.

Predict what you think happened. When you’re ready, click “continue.”
[q]Here’s what happened.

With two dorsal lips, the embryo went through two rounds of gastrulation (3) and developed into a conjoined newt (4).
Now, see if you can use the term “induction” to explain what happened. Write out your explanation in your student learning guide. Then click below to compare your answer to mine.
[c]Q2xpY2sgdG8gY29udGludWU=[Qq]
[f]VGhlIGRvcnNhbCBsaXAgb2YgdGhlIGJsYXN0b3BvcmUgaXMgdGhlIHRpc3N1ZSB0aGF0IGluZHVjZWQgZ2FzdHJ1bGF0aW9uLCBhbmQgdGhlIGRldmVsb3BtZW50IG9mIHN0cnVjdHVyZXMgbGlrZSB0aGUgbmV1cmFsIHR1YmUgKGF0ICYjODIyMDtmJiM4MjIxOyBhbmQgJiM4MjIwO2cmIzgyMjE7KS4gV2l0aCB0d28gZG9yc2FsIGxpcHMgKHRoZSBvbmUgZnJvbSB0aGUgaG9zdCBhbmQgdGhlIHRyYW5zcGxhbnRlZCBvbmUpIA==dHdvIHJvdW5kcyBvZiBnYXN0cnVsYXRpb24gb2NjdXJyZWQsIGFuZCBhbiBlbnRpcmUgbmV3IGVtYnJ5byB3YXMgaW5kdWNlZC4=
Cg==Jmd0Ow==[Qq]
[/qwiz]

[q] The diagram below shows that in a zygote, molecules in the cytoplasm are not distributed in a [hangman] way. Some of these molecules might be a type of early-acting morphogen called a cytoplasmic [hangman]. And if so, cells “h” and “i” will [hangman] into different types of cells.

[q] In the diagram below, the zygote is at

[q] In the diagram below, cleavage is indicated by

[q] If the diagram below is telling the story of cytoplasmic determinants, then the molecules indicated by “e” must be [hangman] factors

[q] The diagram below shows a drosophila egg, surrounded by its follicle. What letter represents bicoid mRNA?

[q] The image below shows the effect of a maternal effect mutation in the [hangman]gene.

[q] The image below is illustrating [hangman].

[q] In the system below, the inducing cells are shown at

[q] If the system below is about induction, then a signal transduction cascade is being shown at …

[q] In the diagram below, the tissue that was able to induce the formation of the second embryo was