In the previous tutorial, we focused on observations of evolutionary change within a single lineage of organisms. A lineage is a line of descent. Within that lineage, there will be an ancestral form (A), a most recent form (E), and one or more intermediates  (B through D). Whether or not these forms are varieties or species depends on the degree of differentiation (a topic we’ll take up later in this unit).

Evolution also proceeds in a branching pattern, with an ancestral species (A) giving rise to daughter species (E and H), as shown below.

When repeated branchings occur (see below), we wind up with one species giving rise to multiple descendants. That process is called adaptive radiation.  The result is descent with modification that runs in parallel lines. Tracing these parallel modifications can provide us with evidence for evolution.

Here’s an example of adaptive radiation. The birds on the right side of the evolutionary tree live on the Galapagos islands, about 600 miles (1000 kilometers) off the coast of Ecuador. The bird on the left is their common ancestor.

Why is the process of one species splitting into multiple descendants called adaptive radiation? In this context, radiation means spreading out. In relation to the Galapagos finches, the basic idea is this. After the birds first arrived from Ecuador (probably blown there by a storm), they were subject to natural selection in their new island environment. This led to the evolution of new adaptations, especially in the form of their beaks. As the birds spread from island to island, the process of natural selection and adaptation repeated itself. Eventually, you have an array of descendant species, each with a beak that’s adapted to a different food source.

Take a moment to study the diagram below. 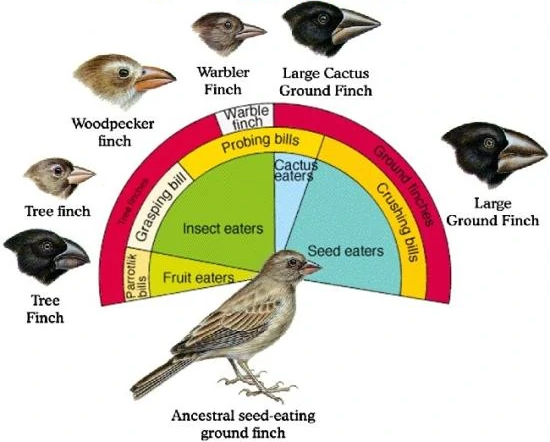 The beaks of the Galapagos finches are structures that have evolved different functions. In each species, there’s been descent with modification. But because of different types of natural selection, the modification is different in each case.

Structures that are inherited from a common ancestor are called homologous structures. The related noun is homology. Homology is a similarity in structure between parts of different species due to evolutionary differentiation from a corresponding part in a common ancestor (adapted from Merriam-Webster).

How are the beaks an example of a homology?

Study the flashcards below.

[a] Adaptive radiation is the process by which one ancestral species splits into multiple descendants.

[a] The diagram below shows the adaptive radiation of bears.

[q] Connect the diagram below to the idea of adaptive radiation.

[a] The diagram shows adaptive radiation. One species evolved into several descendants, each with a unique beak adapted to a particular type of food.

[q] What are homologous structures?

[a] Homologous structures are structures that are inherited from a common ancestor.

[a] The beaks of the Galapagos finches are homologous structures.

[a] A homology is a similarity in structure between parts of different species due to evolutionary differentiation from a corresponding part in a common ancestor.

[q] The birds below are Hawaiian honeycreepers. Use the terms adaptive radiation and homologous to explain the diagram below.

[a] The Hawaiian honeycreepers evolved from a common ancestor through adaptive radiation. Their beaks are homologous.

[a] To say the beaks of these Hawaiian honeycreepers are homologous means that they were inherited from a common ancestor and have differentiated into different forms.

4. Homology as Evidence for Evolution

Let’s look at the bones that make up the forelimbs of humans, dogs, birds, and whales. These structures, which make up the arm, forelimb, wing, and flipper of each respective animal, have the same underlying structure. They’re composed of the same bones. 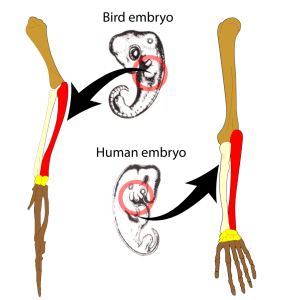 How do we know that they’re the same bones?

You can see this is the diagram to the right. Early in embryonic development, a patch of tissue forms a limb bud, circled in red. If you examined embryos from related species that were at the same developmental phase, you’d see that this tissue is identical in form. However, as the animal develops into its adult form, the limb bud differentiates into the form characteristic of its species.

Why are all vertebrate forelimbs composed of the same bones, and why do they develop from the same embryonic tissue? Because all of these animals share a common ancestor. Through adaptive radiation, the ancestral species split into several lineages. In each lineage, natural selection led to the development of unique adaptations shared by that evolutionary group.

Look again at the diagram showing homology in the forearms of various vertebrates.

Looking at vertebrate forelimbs (as well as the beaks of the Galapagos finches), you can see why homologous structures have been compared to the musical form of “theme and variations.” This form, popular in classical music, takes a melody (the theme), and then modifies it (producing the variations). In evolution, the theme is the structure in the common ancestor; the variations are the specific adaptations in the descendants.

Let’s consolidate our understanding with flashcards, and then a quiz.

[h]Homologous structures as evidence for evolution

[q]How do we know that the forelimbs of vertebrates are composed of the same bones?

[a]We know that the forelimbs of vertebrates are composed of the same bones because of the bones’ similar position and relationship to one another, and because they develop from the same embryonic tissue.

[q]The forelimbs of vertebrates can be described as

[a]The forelimbs of vertebrates can be described as homologous structures.

[a]If a group of species share homologous structures, it’s evidence that they evolved from a common ancestor.

[a]Homologous structures are structures that are inherited from a common ancestor.

[a]Homologous structures are evidence of adaptive radiation from a common ancestor. They’re also evidence of descent with modification.

[q]Adaptive radiation leads to two or more daughter species. As each species adapts to a different environment, different types of natural [hangman] will produce different adaptations in each descendant. In the case of these Galapagos finches, selection was for different types of [hangman].

[q]The beaks below are modified forms of an ancestral structure in a shared ancestor. Therefore, we can say that they’re [hangman] structures.

[q]In the diagram below, Eushenopteron is the [hangman] [hangman] of frogs, mammals, reptiles, and birds.

[q]The diagram below asserts that frogs, mammals, reptiles, and birds arose through adaptive [hangman] from a common ancestor.

[q]Homologous structures are evidence of [hangman] with [hangman] from a common ancestor.

6. Vestigial traits are a special type of homology

6a. The Case of the Blind Cave Tetra

About 30 different cave populations have been identified. None have achieved the status of a distinct species. They can all interbreed with surface fish and produce fertile offspring.

Why would fish populations that live in caves lose their vision? There are a couple of reasons:

So, instead of functioning eyes, cavefish often have just a trace of an eye left. Such a trace of an organ that once played a functional, adaptive role in an ancestor is called a vestigial trait. In more general terms, a vestigial trait is a structure that has lost its function and only remains in a reduced form.

6b. Additional Examples of Vestigial Traits

You don’t have to look very far to find other examples of vestigial traits.

Our ears are wired up with muscles. But can you move your ears at will? Some people can wiggle their ears a bit, but most people can’t. And, even if you can wiggle your ears, you can’t move them in the way that other mammals like cats, dogs, rabbits, and bats do. These animals move their ears to focus the sound and to pinpoint its source. Ear movement helps predators be better at catching prey. It helps potential prey be better at avoiding being caught.

Human ear muscles are a vestigial trait. They’re evidence of descent with modification. In this case, we evolved from mammalian ancestors that had functioning ear muscles.

Here’s another human vestigial trait: the coccyx, or tailbone.

Humans belong to a group of mammals called primates. Most primates, such as monkeys and lemurs, have tails. Within the primates, we belong to the family Hominidae or great apes. This group includes chimpanzees, gorillas, and orangutans. All of the species within this family lost their tails during the course of evolution. But we still have a vestige of a tail: our coccyx (tailbone). The coccyx is shown at “2” in the image on your right. Why do we have a coccyx? Because of descent with modification.

Structures without a function

Remnants of the past

[q] Study this reconstruction of whale evolution, and then proceed to the next card

[q] Just to recap, both “b” and “c” in the diagram below are [hangman] to structures in other vertebrates. But while “b” is a structure that still has its function, “c” has evolved into a [hangman] structure.

[q] The vestigial leg bones of whales (at “C”) are evidence of their [hangman] with [hangman] from a four-legged mammalian ancestor.

[q] In the diagram below, the vestigial trait is at number

[q] In the diagram below, structures “3” and “4” are not considered to be [hangman] because they have a clear

[q]Structures can become vestigial because evolution has a kind of “[hangman] it or lose it” dynamic. Complex structures take [hangman] to build, maintain, and repair. If the structure doesn’t help a species survive, then the energy used to support that structure can be used for other activities or building other structures that increase an species’ evolutionary fitness.

[q]Structures in human beings like our tail bones or ear muscles are [hangman] structures. That means that they’re structures that have lost their [hangman].

[a] A vestigial trait is a structure that has lost its function, and only remains in a reduced form.

[a] For a vestigial trait to form, mutations for genes that reduce a trait need to accumulate in a population’s gene pool.

[q] Explain why the evolution of a vestigial trait can increase a species’ fitness.

[a] The evolution of a vestigial trait can increase a species’ fitness because when a structure doesn’t provide an advantage, reducing it can allow energy to be spent on other structures or activities that benefit survival or reproduction.

[q] Explain how natural selection could lead to the evolution of vestigial eyes in cavefish. List two reasons.

[a] First, in a fish that lives in a cave, mutations in genes for eyes that made vision worse would not be removed from the population’s gene pool. That’s because these mutations don’t decrease fitness. Second, reducing eyes when they’re not needed can be a benefit. That’s because the reduction of the eyes allows the energy required for functioning eyes to be spent on other survival activities.

[q] How are vestigial traits evidence of evolution?

[a] Vestigial traits are evidence for evolution because they’re examples of descent with modification. The only reason why a vestigial trait would exist is that the ancestor of the species with the vestigial trait had a functioning version of the trait.

[a] A vestigial structure has no apparent function but was inherited from an ancestor for whom that structure had a function. For example, whales, have no hind limbs but have a pelvis onto which to attach those limbs. That’s because their ancestors possessed hindlimbs, which were lost as whales adapted to their aquatic lifestyle.