As sexually reproducing eukaryotes, the type of gene transfer that we’re used to is vertical. Vertical gene transfer is the movement of genes from parents to offspring. For example, the diagram on the right from AP Bio Unit 5 shows the transmission of the gene for normal hemoglobin (HBA) and the mutated hemoglobin that causes sickle cell anemia (HBS) from parents to offspring.

Vertical gene transfer also happens during asexual reproduction. This can occur in bacteria, or in asexually reproducing eukaryotes. For example, the mutation indicated by the letter A in the diagram on the left is passed from the parent in generation 1 to its offspring in generation 2. These bacteria, in turn, pass on the same mutated gene to generation 3.

In addition to vertical gene transfer, bacteria and other prokaryotes can also transfer genes horizontally. Horizontal gene transfer is also known as lateral gene transfer. It’s the movement of genetic material from one organism to another that occurs outside of reproduction. In other words, horizontal gene transfer does not include the creation of a new organism. That makes it very different from the vertical, parent-to-offspring transmission of genes that we, as sexually reproducing eukaryotes, are accustomed to.

An example of horizontal gene transfer involves the spread of genes through plasmids.

In addition to their main chromosome (“a,” in the diagram to the left) bacteria can have extrachromosomal pieces of DNA known as plasmids (letter “b” in cell “I”). Like any piece of DNA, plasmids can contain genes. In the example below, the plasmid contains genes for creating a structure called a pilus (at “c”).

A pilus can have a variety of functions, but in this case, what it does is create a bridge to a cell that lacks a pilus (cell II). Once the pilus is in place, the plasmid (using enzymes such as DNA polymerase, at “e”) replicates itself and sends a copy of itself to cell II. At the end of the process (row 4), we have two cells that contain plasmids and which are capable of producing a pilus.

That’s horizontal gene transfer.  The recipient cell (II) picked up genes giving it a new genotype and a new phenotype. No reproduction took place. We started with two cells, and we ended with two cells. But one cell (II) took up genes from the other.

The specific type of horizontal gene transfer shown above is called conjugation. Conjugation involves plasmids and pili. At a minimum, conjugation will convert a bacterium without a pilus into one with a pilus. But additional genes can be transferred as well. A typical plasmid contains a few thousand base pairs and can have dozens of genes, including genes for antibiotic resistance: the ability of bacteria to grow even when exposed to antibiotics (substances that inhibit bacterial growth). The transfer of antibiotic resistance genes through conjugation is a key mechanism by which resistance to antibiotics spreads throughout bacterial populations, Antibiotic resistance is a major public health concern, and it’s a topic we’ll address again in AP Bio Unit 7 (evolution).

2. During Transformation, Bacteria Pick Up Genes from their Environment 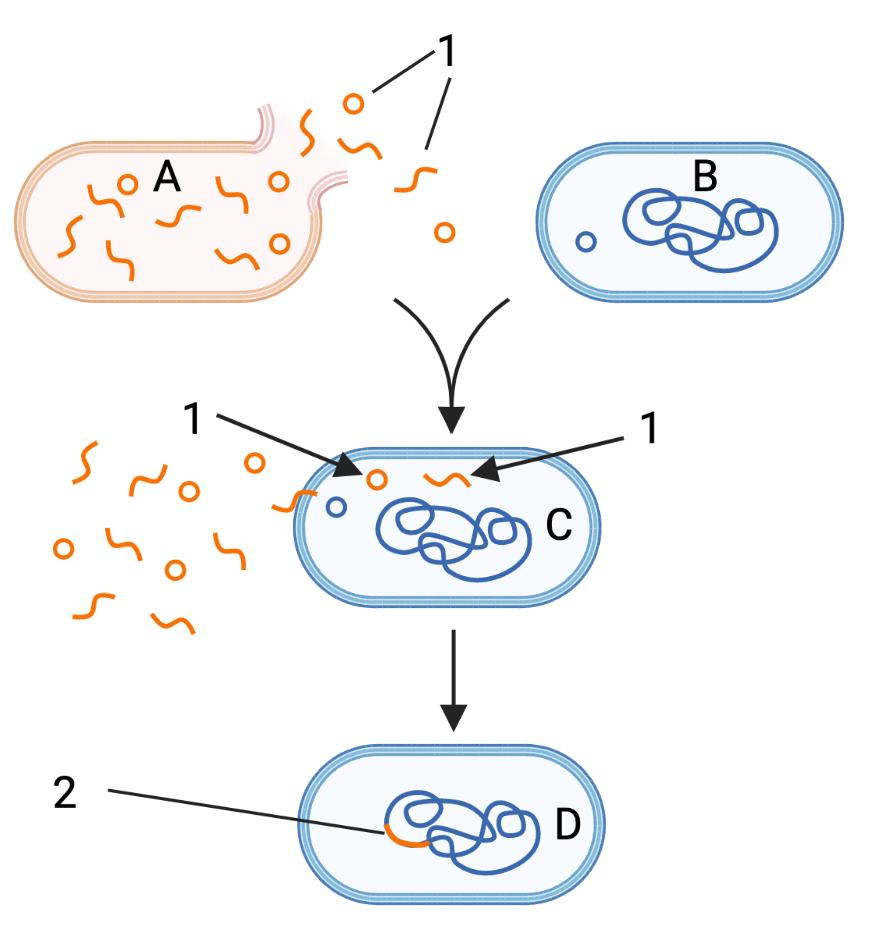 Transformation is a type of horizontal gene transfer in which bacteria take up DNA from their environment and incorporate that DNA into their genomes. Note that bacteria can’t just pick up any piece of DNA. It has to be DNA that’s compatible with the DNA they already have. If the DNA is compatible, enzymes called recombinases will integrate the new DNA into the bacterial chromosome.

In the diagram to the right, letter “A” represents a dead bacterial cell that’s releasing its DNA (1) into the environment. “B” is a nearby bacterial cell. Letter “C” shows that same cell absorbing the DNA released from cell “A.” At “2,” you can see the DNA now incorporated into the main chromosome.

The cell at “D” is said to be transformed.

Transformation is also used to describe the technique of forcing bacteria cells to take up entire plasmids during genetic engineering, a topic we’ll address in the next tutorial.

[q] In the diagram below, the structure at “c” is called a [hangman]. It’s used to transfer a [hangman] (at “b”) from one cell to another. This type of horizontal gene transfer is called [hangman].

[q] The process shown below is called [hangman]. It occurs when a bacterial cell absorbs DNA from its [hangman].

[q] In the diagram below, newly integrated genes are shown at

[q] In the diagram below, the transformed cell is shown

[q] In the diagram below, a plasmid is at letter

Viral transduction is another type of horizontal gene transfer in which viruses transfer genes from one bacterial cell to another one. Here’s how it works.

Cell 1 in the diagram on the left is being attacked by a bacteriophage. The phage, as part of the lytic cycle, starts its attack by injecting its DNA into its victim. As the attack proceeds, the phage uses the cell’s molecular machinery to reproduce its own phage DNA (at “d”) while simultaneously breaking down the victim’s chromosome (“b”) into smaller pieces of DNA (at “c”).

Letter “e” shows the assembly of viral proteins, the self-assembly of new phage, and lysis. But during the process of self-assembly, a mistake occurred. The phage labeled “g,” instead of taking up phage DNA (colored blue in this diagram), took up bacterial DNA (colored red). For a comparison, look at phage “f,” which contains phage DNA.

As far as viruses go, since 2020 the world’s attention has mostly focused on SARS-CoV-2 and the COVID-19 pandemic. But in 1918  a far deadlier pandemic caused by the influenza virus swept the world. This pandemic infected as many as 500 million people and killed between 17 and 100 million people. To get a sense of the magnitude of this pandemic note 1) that the world’s population at the time was just under 2 billion (compared to 8 billion today), 2) the COVID-19 pandemic has killed, worldwide, about 6.6 million people.

Influenza (commonly called “the flu”) is caused by a family of RNA viruses. The RNA is divided into segments (represented by “1” in the diagram below). Among the proteins that the RNA codes for are surface proteins (represented by 2). These proteins are the antigens that our immune system responds to when fighting off the virus. In other words, in order to fight off these viruses, our immune cell receptors need to be able to bind to these proteins, allowing for recognition, immune mobilization, and ultimately, neutralization of these viruses (see the diagram to your right).

This slight change in surface proteins in influenza viruses caused by mutation is called antigenic drift. It’s an ongoing process. This shift in protein structure makes it harder for our immune system to recognize and fight off the virus, and it’s part of the reason why we don’t remain immune to the flu from year to year, whether or not we’ve been infected or vaccinated during the previous year.

A much bigger change in viral genes, viral surface proteins, and the potential for the virus to cause infection involves what’s called antigenic shift.

Here’s how antigenic shift works. In addition to replicating in humans (A), influenza can also infect birds (B) and pigs (C). If a human strain and a bird strain wind up in the same pig cell (D), then that cell acts as a kind of mixing vessel in which the genetic material of the human and bird strain can recombine. That causes a new strain of virus (E) in which the surface proteins are significantly different from other strains. That strain will be much harder for the human immune system to recognize and overcome. creating a potential for a worldwide influenza pandemic (such as the ones which occurred in 1918, 1957, 1968, and 2009)

[q] In the diagram below, a phage that has picked up the “wrong” genetic material is shown at

[q] In the diagram below, the new DNA that has been introduced into bacterial cell 2 is indicated by

[q]The process below represents [hangman]. This is a form of [hangman] gene transfer in which a phage mistakenly incorporates [hangman] from one cell and transmits it to another cell.

[q] In the diagram below, conjugation is represented by

[q] In the diagram below, transformation  is represented by

[q] In the diagram below, transduction  is represented by

[q] In the diagram below, vertical gene transfer is represented by

[a] In vertical gene transfer, parents transmit all or half of their genome to their offspring (depending on whether reproduction is asexual or sexual, respectively). In horizontal gene transfer, one organism transfers genes to another organism that is not its offspring. If the recipient is unicellular, then these newly acquired genes become part of the recipient’s genome, and will then get passed to its offspring. In a multicellular organism, horizontal transfer only has long-lasting results if the genes are transferred into the germline (the cells that create an egg or sperm cells).

[a] Bacteria have, in addition to their main chromosome, small circles of DNA called plasmids (b). These plasmids can be copied in one bacterial cell, with the copy transmitted to a second bacterial cell via a membrane extension called a pilus (c). This transfer of plasmids transfers whatever genes are encoded on the plasmid to the second cell, which can, in turn, transmit this plasmid to another bacterial cell (or its offspring).

[a] In bacterial transformation, bacteria pick up DNA fragments (a) from the environment, which become incorporated into the genome (c). In genetic engineering, small loops of DNA called plasmids can be forced into bacterial cells, and this forced uptake of plasmids is also referred to as transformation.

Importance for the AP exam: High

Transduction is a type of horizontal gene transfer that can occur through viruses. During viral infections, the virus breaks apart the host’s genome. Sometimes, DNA fragments from the host are mistakenly incorporated into a virus. As a result, when that virus infects a cell in another organism, it can bring in that other organism’s DNA. If the virus infects a germ-line cell, then new genes can be incorporated into the gene pool of the recipient.

[q] Using the diagram below as a stimulus, describe what happens in antigenic drift.

[a] Antigenic drift is the process by which mutations in the influenza virus (5) cause its surface proteins (6) to change. Because these surface proteins are the antigens that our immune systems use to recognize, overcome, and remember the virus, the result is that long-term immunity to influenza is impossible. While immunization with a flu vaccine (or an influenza infection) can keep you safe for the remainder of any one flu season, it won’t give you immunity to the influenza viruses that emerge in the coming years.

[q] Using the diagram below as a stimulus, describe what happens during an antigenic shift.

[a] During an antigenic shift, strains of the influenza virus that infect humans (A) and birds (B) co-infect a third host (a pig). In the pig’s cells, the genetic material of the avian and human strains recombine. This creates a new strain of the virus (E) with significantly different genes and proteins from anything that humans have experienced before. Since viral proteins serve as the antigens that enable the human immune system to recognize, overcome, and remember previous infections, this new viral strain will have a much greater capacity to infect and cause serious disease, setting the stage for an influenza pandemic.