Have you ever cleaned your bathroom at home?  You probably used a base. Bleach is a very strong base.  On the other hand, toilet bowl cleaners contain hydrochloric acid, which is also used in swimming pools to prevent algae build up on the floor and walls.  Acids and bases are common in everyday life and you are probably more familiar with them than you think. Today we start looking at the chemistry of acids and bases.

pH is a measure of how acidic or basic a solution is.  Recall that a solution is a liquid – the “solvent” – plus a substance- the “solute” – mixed or dissolved in the solvent.  For the most part we will be talking about water solutions – water is the solvent – but other solutions can also be acidic or basic. The pH scale has a range from zero to 14.  Zero is highly acidic; 14 is highly basic;  7 is neutral – neither basic nor acidic.

Another name for  a basic solution is “alkaline.”  Thus pH can also be said to measure acidity or alkalinity.

pH actually has a precise meaning.  pH measures the relative amount of free hydrogen (H+) and hydroxyl (OH‾) ions in the solution. A solution that has more free hydrogen ions is acidic, whereas a solution that has more free hydroxyl ions is basic.   These ions are reactive – they will combine with or split apart other substances.  That is why cleaning products are often either highly acidic or highly basic – they’ll break down dirt, germs and other things you want to clean up.

Non-neutral pH is caused by chemicals in the solute.  Thus, pH is an important indicator of water that is changing chemically.  Note, however, that there are some chemicals that don’t change the pH of water; salt is one example.

[q] The pH of distilled water is

The first scientist of note to define acids and bases was a Swedish scientist named Svante Arrhenius (1859-1927). 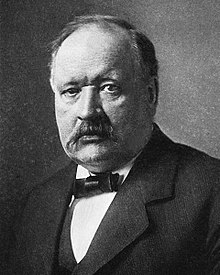 The most common and simplest definition of pH is based on a substance’s behavior when water is the solvent.  But this definition does not work for non-water solutions, so there is another definition that is a little more complicated, but is more general – the second definition works in ALL cases.  The two definitions are named after the chemists who first came up with these definitions – “Arrhenius acids and bases” and “Brønsted-Lowry acids and bases.”

On the other hand, an Arrhenius base exists when a substance is dissolved in water and creates a hydroxide ion (OH–) in the product. For example, bleach is sodium hypochlorite, NaClO, dissolved in water, which creates HOCl+ ions and NaOH– ions.

As we said an Arrhenius acid can best be defined as a substance which when dissolved in water, donates a hydrogen ion to a water molecule to make a hydronium ion, H3O+.  By donating H+ ions, the acid molecules cause an increase in the hydronium ion concentration. The Arrhenius pH is based on the concentration of hydronium ions.

An Arrhenius base, conversely, is a substance that when dissociated in water, will form a hydroxide ion, OH−

The dissociation of sodium hydroxide is shown here:

The limitation of Arrhenius acids and bases is that water needs to be present in order for a substance to qualify. While water is present in many situations, it is not always the case, and acids often exist even in situations where water is not present. An acidic compound being dissolved in something such as toluene, C7H8,  would not create the hydronium ions that meet the definition of an Arrhenius acid.

Similarly, the definition of Arrhenius bases runs into a small problem in some circumstances as well. A compound such as NaNH2NaNH2 when dissolved in a liquid form of ammonia, NH3, would not produce hydroxide ions.

The Brønsted-Lowry Theory of Acids and Bases

Let us use the reaction of ammonia in water to demonstrate the Brønsted-Lowry definitions of an acid and a base. Ammonia and water molecules are reactants, while the ammonium ion and the hydroxide ion are products:

What has happened in this reaction is that the water molecule has donated a hydrogen ion to the  ammonia molecule, which then accepts the hydrogen ion. Look at the reaction below:

Would an Arrhenius acid like hydrochloric acid still act like  an acid in the Brønsted-Lowry sense? Yes, but we must understand what happens when HCl and water react.   First, the hydrogen atom is a single proton surrounded by a single electron. To make the hydrogen ion, we remove the electron, leaving a bare proton. Would bare protons float around in aqueous solution? That answer would be NO. What  happens is that the H+ ion attaches itself to H2O to make H3O+, which is called the hydronium ion. For most purposes, H+ and H3O+ represent the same species, but writing H3O+ instead of H+ shows that we see that there are no bare protons floating around in solution. Rather, these protons are actually attached to solvent molecules.

A proton in aqueous solution may be surrounded by more than one water molecule, leading to formulas like H5O+2H5O2+ or H9O+4H9O4+ rather than H3O+H3O+. It is simpler, however, to use H3O+H3O+ to represent the hydronium ion.

With this in mind, how do we define HCl as an acid in the Brønsted-Lowry sense? Consider what happens when HCl is dissolved in H2O:

[q] According to the Bronsted Lowry Law what is an acid?

[a] an acid is a proton donor.

[q] According to the Bronsted Lowry Law what is a base?

[a] a base is a proton acceptor.

We can depict this process using Lewis electron dot diagrams:

On the other hand, a base is a molecule which can accept hydrogen (H+) ions from the solution. A strong base will  dissociate completely and it will result in a cation and a hydroxide (OH–) ion.

A conjugate acid is what is left of the acid after the proton is donated.

Likewise, a conjugate acid is formed by adding a proton to the base.

Lewis, the infamous scientist of Lewis structures gave a new definition of acids and bases that emphasizes the shared electron pair (certainly he would!).

But what are Lewis acids?

Usually they will have an incomplete octet.

They have the following characteristics

Look at this reaction

Another way to view this is that Metal ions are positively charged and attract water molecules (the oxygen has a lone pair).

The smaller the metal ion, the lower the Ph.

There is no special system for naming bases. Since they all contain the OH− anion, names of bases end in hydroxide. The cation is simply named first. Some examples of names and formulas for bases are shown in the table below. 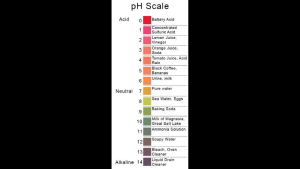 Strong acids and strong bases are those species which dissociate/ionize essentially to completion upon being placed in aqueous solution.

Dissociation of a strong acid (hydrochloric for example):

Dissociation of a strong base (sodium hydroxide for example):

Substances that ionize completely (which include strong acids and bases) are called strong electrolytes, and further include basically all water-soluble ionic compounds.

Strong acids and strong bases  dissociate/ionize  to completion upon being placed in aqueous solution.

Substances that ionize completely (which include strong acids and bases) are called strong electrolytes, and include basically all water-soluble ionic compounds.

For a list of the strong acids and bases, try this: