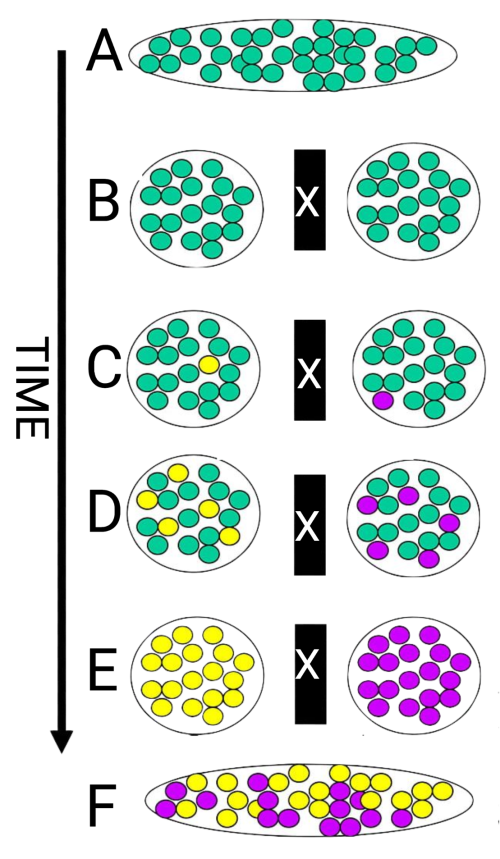 In the previous tutorial, you learned about allopatric speciation. Allopatric speciation involves a geographic barrier (“X” in the diagram at left) that splits a population into two. Once split apart, mutation and natural selection cause each sub-population to differentiate.  (shown at “C,” “D,” and “E”). Finally, the sub-populations become so different that when the barrier is removed (“F”), they become   reproductively isolated: they can no longer interbreed. They’ve become two species.

In this tutorial, you’ll learn about a second type of speciation: sympatric speciation.

Start with the interactive reading below.

[q]The model below represents sympatric speciation. The key feature of this model is that the new species at “a” arises without any [hangman] barrier.

[x]What’s the takeaway? Sympatric speciation happens without geographical barriers. Continue below to see how that can occur.

2. In plants, “instant” sympatric speciation can occur through changes in chromosome number

In plants and fungi (and less frequently in animals), sympatric speciation can arise through a process called polyploidy: a doubling (or more) of chromosome number. In agriculture, this process has been exploited by plant breeders in the development of several important crops.

How does polyploidy come about? In what follows, we’re going to use some meiosis-related terms. If you need to review, click here.

In the diagram at right, the diploid number of an organism from the parent species is six (2n = 6, with three homologous pairs). An error during meiosis (represented by the arrow at “a”) creates gametes (2) that still have the diploid number of chromosomes, rather than a haploid set. If, as often happens in plants, these gametes self-fertilize (b), then a daughter species will be created with a diploid number of twelve (2n = 12, with six homologous pairs). If the parent  and the daughter can’t hybridize (which could result from the fact that their chromosome numbers differ), then we have instant reproductive isolation and instant speciation.

There are complex variations on the basic idea of polyploidy. These involve chromosome doubling, followed by fertilization with gametes from closely related plants from other species. If you want to learn about these, you can do so in our AP Biology tutorial about sympatric speciation.

Based on analysis of chromosome numbers, polyploidy is also a common speciation mechanism in fungi. It’s rarer in animals, but does occur. For example, some fish species have up to 400 chromosomes, something that could have arisen through multiple duplications of chromosome sets.

[q multiple_choice=”true”] Among the multicellular, eukaryotic kingdoms, speciation through chromosome number changes is  least common in

[q] In the diagram below, which letter refers to (abnormal) meiosis?

[q] In the diagram below, which letter indicates fertilization?

[q] Because it involves changes in chromosome number, polyploidy can result in [hangman] speciation,

4. Sympatric Speciation in Animals can Occur through Sexual Selection

In animals, another way that sympatric speciation can occur is through intrasexual selection. In this type of sexual selection, females choose their mating partners. The result is selection for a specific trait in males. If you want a spectacular example, think of the tail feathers of a peacock.

How could sexual selection lead to sympatric speciation? Consider the following scenario.

Is there any evidence for this? Reproductive isolation by female mating preference seems to be what has powered a spectacular example of sympatric speciation in a type of fish called a cichlid (pronounced “sick-lid”).

Cichlids are found in tropical and subtropical waters throughout the world. Two male cichlids are shown above. Hundreds of cichlid species  are found in Africa’s Lake Victoria, the world’s second largest freshwater lake (second only to North America’s Lake Superior). While there are different types of habitats within the lake (deeper water, shallower water, sandbars, papyrus reeds, etc.) the lake has no internal barriers. In other words, allopatric speciation isn’t possible.

Many of the species in the lake have similar phenotypes. They might differ only by color markings (as shown above). Under laboratory conditions (as we’ll see below), fish from closely related species can hybridize (interbreed) and produce fertile, healthy offspring. Could female mate choice be what’s keeping these different species apart?

Here are few things to consider.

1. In terms of color, there’s a lot of difference between male and female cichlids. The difference fits the intersexual selection pattern, with males having more ornamentation than females.

2. Female cichlids only lay eggs after being courted by males. In other words, the females get to choose whom they mate with.

3. When females can’t easily see the color markings  on males, they seem to lose their preference for mating with males of their own species, and mate just as frequently with males from closely related species.

When would this happen? In nature, it happens in areas where water is murky. And it can also  be simulated in a laboratory.

Researchers  O. Seehausen and J.J. M. van Alphen set up aquaria where males of P. pundamilia (which are blue) and P. nyererei (which are red) could be illuminated under normal white light (as shown on the left) or in orange light (as shown on the right). The diagram below shows what the fish would look like under each type of light. Note how hard it is to distinguish between the two species under orange light (right side).

Next, females of each species were able to interact with the males under under each type of light. To do this, the researchers created what’s called a “choice chamber.” It was set up as shown below. The males were trapped within a transparent enclosure that allowed them to attract the attention of a female that was placed in the middle of the tank.

Guess what happened? Under normal (white) light, as shown above the females had a clear preference for interacting with males of their own species.

Under orange light, as shown below, the results were different. The females interacted equally with males of each species.

To consolidate what you’ve learned, answer the questions below.

If female mate choice is at work, where do you expect there’d be more breeding between species (hybridization)?

[q]When females assess a male’s attractiveness as a way of choosing whom they’ll mate with, it’s known as [hangman] selection.

[q multiple_choice=”true”]Intersexual selection can lead to

[q] Female mate choice can lead to [hangman] isolation between populations. This can set the stage for [hangman] speciation.

[q labels =”top”]Based on what you’ve learned about cichlids, label the fish below.

The table to the left shows eight different species of bird lice. Another species (which parasitizes the common buzzard) is shown at right.

Bird lice are parasitic insects that feed on bird feathers, scales, or blood. The 8 shown are a very small sample of a group that includes dozens of species.

1) Different types of birds are parasitized by different species of lice (with some lice species parasitizing albatrosses, others parrots etc.).

How could such speciation arise?

Imagine the ancestors of today’s bird-lice, tens of millions of years ago. These parasites might have already parasitized the small dinosaurs that were the ancestors of birds. As ancestral birds differentiated into different species, each living in different habitats, nesting in different areas, and more or less common in different geographical areas, the lice on each species of bird would find their gene pools to be largely cut off from the bird-lice that were parasitizing other bird species. Genetic drift and natural selection would cause the bird-lice parasitizing these different bird species to genetically differentiate, evolving into separate species.

Note that while these emerging species were on different types of birds, there was never any geographical barrier (so we can’t think of this as allopatric speciation).

Another example of sympatric speciation through habitat differentiation has occurred within the last few hundred years. It has involved the apple maggot fly, Rhagoletis pomonella.

The apple maggot fly is native to North America. Its original host was the  the fruit of Hawthorn trees. Females lay their eggs on Hawthorn fruit. The eggs develop into maggots, which consume the fruit as they grow.

Apples and hawthorns are both in the same botanical family, Rosaceae. When European colonists introduced domesticated apples into North America in the 1600s, it didn’t take long for Rhagoletis to jump from its original host to the newly introduced apples. By the mid 1800s, Rhagoletis was causing crop losses in apple orchards, and it continues to be a major agricultural nuisance to this day.

Those Rhagoletis populations that parasitize apples seem to be heading down a road that will result in their forming a new species. For one thing, Rhagoletis flies lay their eggs on the same type of fruit where they themselves developed, which creates a habitat barrier, reducing gene flow between the hawthorn and apple populations. In addition, hawthorns and apples produce fruit at different times of the year, with apples producing fruit in mid-July, and hawthorns producing fruit in mid-September. This creates a temporal barrier between the two populations, further reducing gene flow. In addition, a recent study has uncovered differences in smell preferences in each sub-group, with Hawthorn-infesting flies preferring the smell of hawthorns, and apple-infesting flies preferring the smell of apples. This provides a behavioral and neurological basis for further differentiation. Click here to read a study about smell preferences, and here for a more general overview of Rhagoletis evolution.

In this tutorial, you’ve learned that speciation can occur sympatrically: without a geographic barrier. Test your mastery by answering the questions below.

[q][hangman] is a process that involves duplication of entire chromosome sets.

[q]Of the multicellular eukaryotic kingdoms, the one with the least amount of speciation through polyploidy is the ____________ kingdom.

[q]The type of speciation represented below is [hangman].

[q]The diagram below shows the appearance of male cichlids in cloudy and clear water. The fact that more interbreeding (hybridization) occurs in environment 1 than environment 2 seems to be evidence that  [hangman] mate choice based on [hangman] selection is acting as a reproductive barrier between Cichlid species.

[q]In any model of sympatric speciation, a key thing to explain is what’s preventing _______ flow between emerging species.

This tutorial ends this module about speciation.  Use the following link to return to the Species and Speciation Main Menu. Or use the menu above to choose another topic.

Question for High School teachers. What do you think of the difficulty level of this module? Also, in this version of our high school curriculum, we’ve left out topics such as adaptive radiation and mass extinction (which are part of our AP/College curriculum). Do you want tutorials on those topics? Use the contact link in the main menu above to let me know.