Our last tutorial focused on how enzymes work, and how they’re affected by changes in their environment. Now we’ll look at 1) how enzyme activity can be inhibited, and 2) how cells regulate enzyme activity. 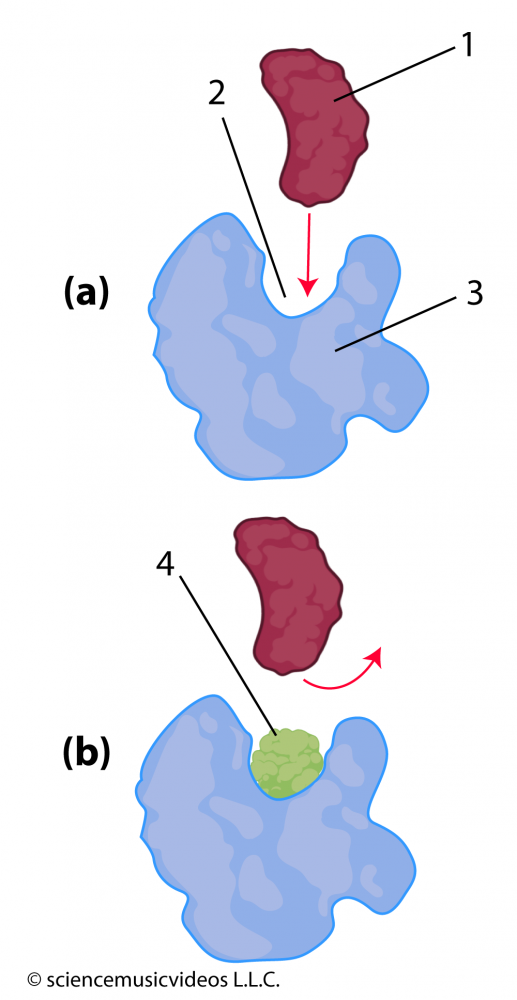 Molecules that enter an enzyme’s environment can also interfere with an enzyme’s ability to bind with its substrate. In diagram (a) at the left, you can see how an enzyme (“3”) has an active site (“2”) that fits with its substrate (“1”). However, if, as in diagram “b”, molecule “4” is also in the environment, then that molecule can also bind with the active site. This binding keeps the substrate from entering into the active site, blocking the conversion of substrate to product. That makes molecule “4” an inhibitor. 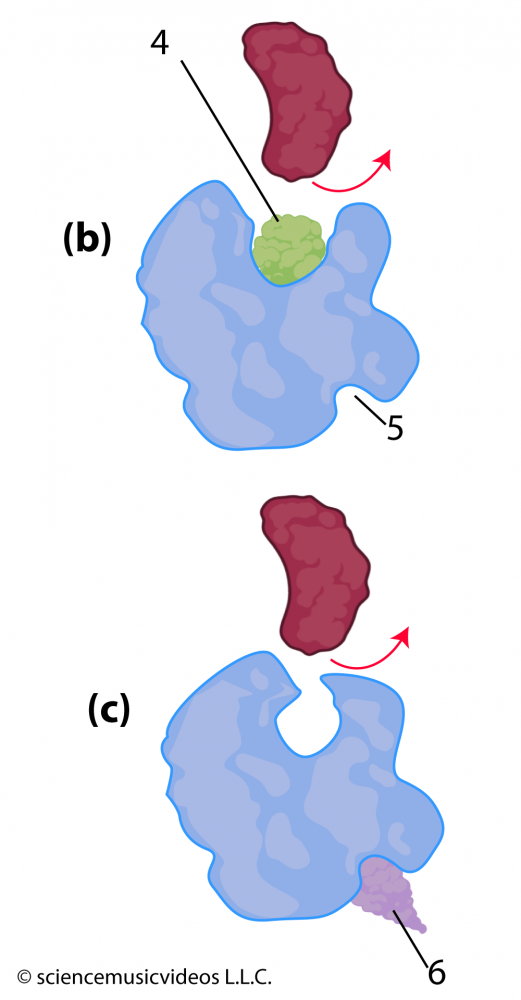 The poison cyanide is a competitive inhibitor of the enzymes used in cellular respiration. You can read more about other enzyme inhibitors and their uses in this Wikipedia article.

Just to make sure you’ve got it, take this quiz about competitive and non-competitive inhibition.

Its substrate is molecule “a,” which enzyme “1”  binds with at its active site, shown at “e.” Together, the two form an enzyme-substrate complex, and when enzyme “1’s” work is done, it has converted substrate “a” into substance “b.”

Like many enzymes, enzyme “1” is part of a metabolic pathway. That’s because enzymes are like the workers (and increasingly, the robots) on an assembly line. These workers (or robots) do one thing. So if a cell needs to take a molecule and transform it into something quite different, it usually does so in several small steps, each of which is controlled by a different enzyme. Enzyme “1,” for example, is the first enzyme in a three-enzyme pathway, as shown below.

Now, let’s think of this in an evolutionary context. In the struggle for life, any organism that can more efficiently use resources will have an advantage. For example, looking at the pathway above, if the cells of an organism have enough of product “d,” then it would be advantageous to stop consuming substrate “a,” and to save it for later until product “d” is needed. But that would require turning enzyme “1” off. How can a cell turn an enzyme off?

One method is called feedback inhibition. The product, “d” has to somehow interact with enzyme “1” in a way that inactivates it. Here’s how this could work.

Notice that opposite enzyme “1’s” active site there’s a square-shaped indentation. It doesn’t catalyze any reactions, so it’s not itself an active site. But it does have a shape that complements substance “d.” And when “d” binds with “f,” interactions between “d” and the amino acids on that side of enzyme “1”  cause changes throughout the enzyme in a way that changes the shape of enzyme 1’s. The result is that the active site can no longer bind with the original substrate. In other words, the product, when it binds with site “f,” turns the enzyme off. It feeds back to the first enzyme: hence, feedback inhibition.

We’ve already walked through the bottom portion of the diagram, so let’s focus on the part that starts after the product of this pathway, substance “d,” has been produced. When there’s a lot of “d” around, then “d” will bind with “f,” the allosteric binding site of enzyme “1.” When it does, enzyme “1’s” active site will change its shape so that it no longer complements substrate “a,” which will shut down the entire pathway. Note that this only makes sense if you think of populations of enzymes and substrates. If there’s a lot of “d” produced, then the chance of enzyme “1” being in its active form is very low. Conversely, if there’s very little of “d,” then enzyme 1’s active site will be ready to complement substrate “a,” starting up that metabolic pathway.

Got it? Take this quiz to see if you’ve mastered these concepts.