1. Transcription sets the stage for Translation

Note the function of each type of RNA:

Continue reading to learn more about each of the key players in translation.

2. Making protein is the goal of translation

Proteins are the action molecules of cells and organisms. Most of life’s key functions (like movement, defense, or enzymatic control of chemical reactions) are based on proteins. What you’ll see as we move through this course is that life is a system of genes (made of nucleic acids) that specify proteins, which reproduce those genes.

In a previous module in this course, you’ve already learned about the chemistry of proteins.  Here’s a quick review of the basics. If you find, as you read what’s below, that you feel hazy on what we learned earlier this year, definitely go back to review (access the tutorials through the main menu above), and then come back here.

1. Proteins are polymers of amino acids. As shown below, each amino acid consists of a central carbon atom. The central carbon is bonded to an amino group (—NH2) on one side, a carboxylic acid group (—COOH) on the other side, and a side chain (also known as an “R-group”). The side chains vary in their composition and chemistry and can be polar/hydrophilic, non-polar/hydrophobic, acidic, or basic.

3. In diagrams about proteins and protein synthesis, amino acids are represented by three-letter abbreviations. In what’s above, Phe represents the amino acid phenylalanine, leu represents leucine, and so on. 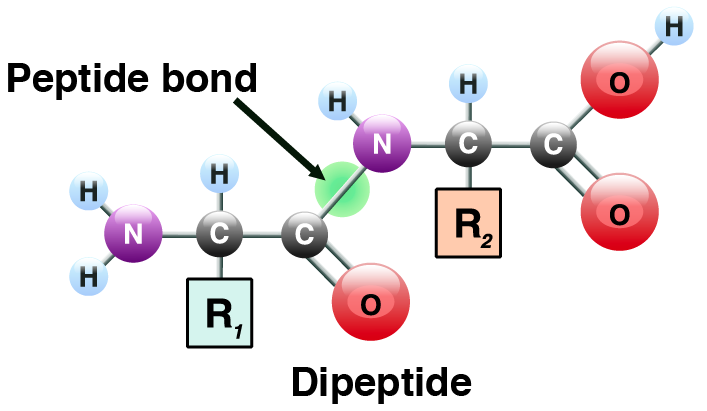 4. Amino acids in proteins are joined by peptide bonds (find the bond indicated by the green circle above).
5. Two linked amino acids form a dipeptide (see above).
6. A chain of amino acids that are linked together is known as a polypeptide. A polypeptide can as short as a few amino acids, or hundreds of amino acids long.

7. Interactions between amino acids cause a polypeptide to fold into a specific shape. This leads to the notion of levels of protein structure.

8. The shape that emerges from these interactions determines a protein’s function. For example, the enzyme shown below will only be able to interact with its substrate if it has a specific shape. 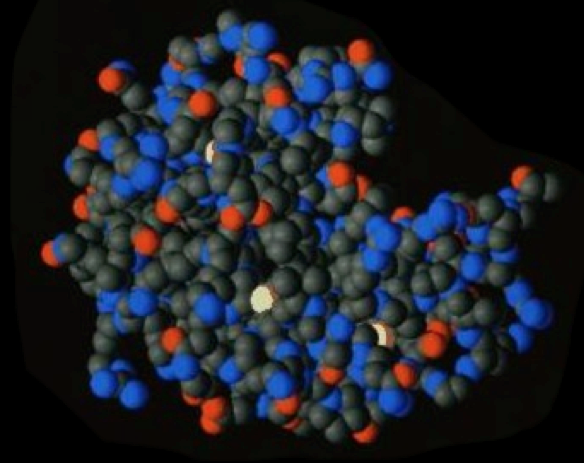 [i]This quiz includes many of the details about protein structure you learned about in module 6.

Here’s what you need to know about messenger RNA:

tRNAs are also RNA polymers. They’re generally between 75 and 90 RNA nucleotides long. But unlike mRNAs, which are linear, hydrogen bonding between nucleotides within a tRNA causes it to fold up. The resulting shape is often represented as a type of cloverleaf, as shown on left. A more realistic model (showing some of the base pairing between complementary nucleotides) is shown on the right.

On the bottom of the tRNA is an anti-codon: 3 RNA nucleotides that complement the codons in RNA

The top of the tRNA has an amino acid binding site.

Ribosomes are made of ribosomal RNA (rRNA), along with dozens of proteins.

In terms of function, ribosomes are protein factories capable of reading mRNA instructions and, with the help of tRNAs, assembling any protein the cell needs to make. 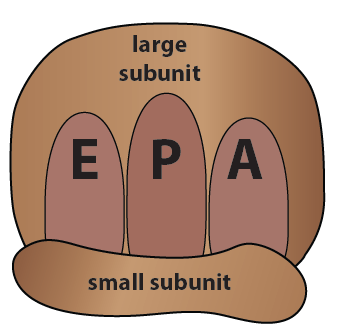 synthesis, then detach after the process is finished. In the image above left, the small subunit is shown in blue, and the large subunit in red. RNA is shown in dark blue and dark red. The lighter shades of blue and red represent proteins.

In the explanation of the protein synthesis that follows, we’re going to use the image on the right. “E”, “P,” and “A” are binding sites, as I’ll explain below.

7. An overview of translation

During translation, ribosomes “read” the mRNA, translating the sequence of codons in the mRNA into a sequence of amino acids in a protein. 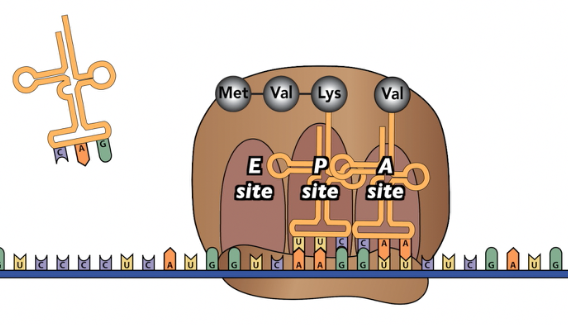 The diagram above shows translation in progress. You’ll watch an animation of this process in a moment, but, for now, notice these key aspects of the process.

Here’s a summary of the three ribosomal binding sites

Pretty much everything you need to know about protein synthesis at the introductory college/AP Biology Level is found in my protein synthesis music video. Strap yourself in, because my music partner Max Cowan gives this a heavy metal sound. If you’re in a classroom or a computer lab with other students within earshot, please use your headphones/earbuds.

Warning! It takes me about 7 minutes to complete this quiz…so it’s probably going to take you longer. But you will learn a ton by doing it!  If you don’t finish you can come back and do only the questions you haven’t done; look for the option “New” after you click “Start quiz”.

[i]This quiz has 65 questions. If you need to stop and then come back later to finish, look for an option to only do questions you haven’t already done (“New”) after you click ‘Start quiz'”